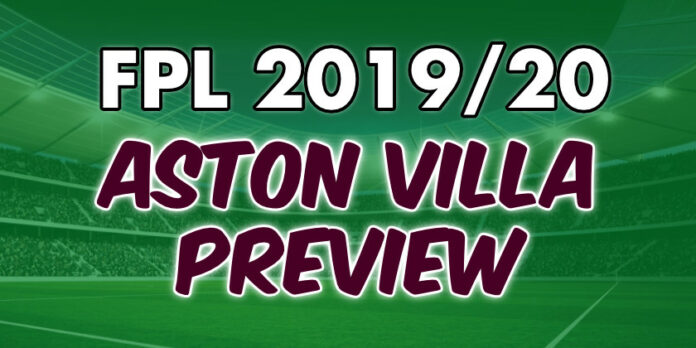 Despite finishing 5th in the Championship last season, there is optimism surrounding Aston Villa in the Premier League. This has translated into the FPL community considering their players for Fantasy Premier League – something which wouldn’t have happened to other clubs promoted in the same way.

It’s quite astonishing that a team with the 9th and 7th best respective home and away records in the Championship can reach the Premier League, but here we are.

Aston Villa are quite an open team which is evidenced by their games averaging more than three goals a game. They also conceded more than an average of one a game.

There’s little reason to believe they will tighten up in the Premier League, despite being busy in the transfer window.

Fixtures are Helping The Claret and Blue Cause

While they start the season with a nasty fixture, Tottenham (a), they do play three of the following four at home, with an away trip to Crystal Palace in between.

It isn’t smart to rely on fixtures too far in advance but over the first eight fixtures, their run is as good as anyone else’s.

Plenty of Villa players are being considered by FPL managers but it’s unsurprising, given their new Premier League status, that none of them particularly stand out.

Grealish Bought on His Name?

Jack Grealish is currently Aston Villa’s most picked player with 8.1%. While certainly an influential player, his 6 goals and 7 assists probably don’t warrant 8.1% of managers picking him at £6.0m. It seems like some are picking him on his name alone.

There are other factors to consider though, Hourihane played 3,495 minutes last season in comparison to Grealish’s 2,995. Nevertheless, this doesn’t make up for the Irishman’s additional returns.

McGinn, whose had been linked with a transfer to Man Utd, played more than the both of them with 3,764 minutes. While he only edged Grealish in goals and assists, he did have significantly more shots than the both them – 77 in total.

Elsewhere, there is also Anwar El Ghazi (£5.5m). The winger scored 6 and assisted 6, earning himself a permanent move to Aston Villa. He provided these returns in just 2,448 minutes meaning he scored or assisted in just over every two games.

All four of these players provide reasons to include them in your FPL in team. With that said, the most probable scenario here is that they will share the goals and subsequent points between them. As a result, we would avoid all of them unless one comes to the forefront.

Any Value in the Villa Defence?

In terms of clean sheets prospects, little. New permanent signing Tyrone Mings (£4.5m) scored twice in 15 appearances last season but is known to get a card or two.

The better options seem to be Ahmed El Mohamady who has previous Premier League experience which includes assists. This continued in the Championship last season with two goals and 8 assists. He is now the wrong side of 30 but at £4.5m and with the stats to go with it, he will appeal to FPL managers.

Then there is new signing Matt Targett. The former Southampton man provided a few attacking returns last season with a goal and three assists. If he can start ahead of Neil Taylor, he is another one which will generate some interest.

Aston Villa’s fixtures certainly justify interest in these players and FPL managers who choose Targett or El Mohamady certainly couldn’t be begrudged. However, given Villa’s Championship defensive record, they are players we will be avoiding.

Aston Villa’s opening day lineup against Tottenham will be available on Fantasy Premier League Team News page as the start of the season draws closer. Of course, all other teams’ lineups will also be available.