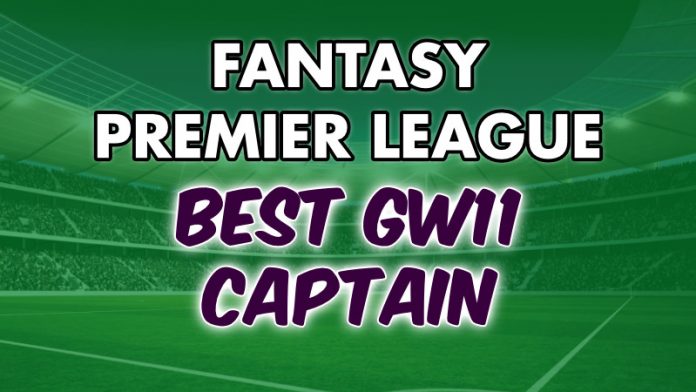 Many of the top captaincy choices last week were caught misfiring, once again highlighting the importance of who you give the armband to.

There are some enticing fixtures in Gameweek 11 where a big points haul could be on the cards for some of FPL’s most prized assets.

The Leicester forward, who already has eight goals and three assists so far, faces Sheffield United who are the only side yet to keep a clean sheet this season. He’ll be back in his hometown of Sheffield this weekend which bodes well, as seven of Vardy’s eight goals have come away from home this campaign.

If that’s not enough to tempt you into captaining him, he’s also been very successful from penalties this year. Scoring five times from the spot with just one unsuccessful attempt.

Last week saw a return to form for City and for the Belgian. He claimed two assists and was denied a goal by the woodwork. This week should bring optimism for more points, with a home fixture against struggling Fulham.

The 17th placed side are expected to be open at the back as they have conceded an average of 13.2 shots per game and 14 open play goals this campaign. They have not kept an away clean sheet and are unlikely to rectify that at the Etihad.

De Bruyne has five assists and has averaged 3.5 shots per game so a goal could be on the cards in GW11.

The summer arrival initially made a slow start to his Premier League career. However, Werner has since managed four goals in the league with three of those coming at Stamford Bridge.

The Bridge is the setting for Chelsea’s game against Leeds. The German international has been key to his team’s impressive start. He faces a Leeds side who play a very open game, conceding 17 overall and allowing 14.6 shots per game on their travels.

He will look to exploit that weakness using his abundance of pace. Also, with Jorginho not starting Werner is the elected penalty taker, making him a very attractive choice.

Salah blanked in his last match against Brighton, but after completing a full 90 minutes against Ajax in midweek he should be back up to speed. The Egyptian will also hope to recover his early season form and add to his tally of eight goals against Wolves.

He is a threat inside the box, scoring all his goals and providing nine key passes inside the penalty area this season. Liverpool are unbeaten at Anfield, where Salah has scored half his goals, and take on a weakened Wolves, who are without Raúl Jiménez for the foreseeable future. He has also scored four penalties this season.

Kane was unsurprisingly rested in the Europa League after picking up a knock, but Mourinho says he should be fit to start GW11 for Spurs. Tottenham will hope their star man is fit, as he’s the joint top scorer in the derby with ten goals.

His seven goals and nine assists have made Kane the top scoring forward in FPL this year with 86 points, just one point behind teammate, and overall points leader, Heung-Min Son.

The England captain is on penalty duty, scoring twice from them this season. He will be looking to capitalise on a very timid Arsenal team to cement his side’s place at the summit of the league table.

In just four away matches, Bruno has five goals and three assists ahead of United’s trip to West Ham. He has averaged 4.5 shots per game away from home, second only to Patrick Bamford (4.6).

His opponents in GW11, West Ham, have allowed 13.8 shots per game at home this season which is promising for another Fernandes haul. One concern for owners of the midfielder is whether he is still on penalties. He missed against Newcastle in GW5 and has even had two retaken penalties. Marcus Rashford has also been taking a few, successfully, which suggests the responsibility could be split.