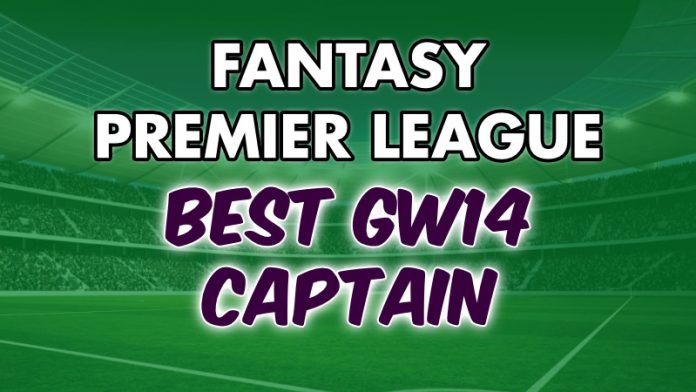 The main captaincy choices were somewhat anti-climatic, with many highly owned assets producing a blank.

However, with not much time to dwell on any midweek mistakes, Gameweek 14 is here and that means another captain must be chosen. Here are this week’s best options.

Salah bagged his 11th goal of the campaign on Wednesday to keep him top of the goalscoring charts. He’s had his best start to an FPL season with 102 points, on course to challenge his 303 point season in 17/18.

He has the highest goals per 90 stat in the league (0.95), making him a stand out option for captaincy every week.

Despite five of his goals being penalties, he is still a threat from open play, with a non-penalty xG of four. The Egyptian faces Crystal Palace, who have allowed 13 shots per game which will encourage Salah captainers.

The same fixture between Spurs and Leicester last season finished 3-0 to the home side, where Kane scored twice. He’s enjoying a fruitful season, producing nine goals and being the assist leader with ten.

Whilst scoring 0.7 per 90, he’s also averaged 1.47 goals and assists per 90, meaning the chances of him getting any form of attacking return is seemingly very high. If that’s not enough to consider him for the armband, he’s also taken the second most shots (48).

Thursday night’s performance was Bruno’s first blank in an away match since he joined United.

His home form hasn’t impressed, but he’s up against Leeds who have allowed 16 shots per game away from Elland Road. Their xG against is 24, only West Brom have a higher total.

As well as scoring seven goals, the Portuguese midfielder has an xA of 4.55 and has delivered 36 key passes this season. He creates lots of opportunities, being third overall for passes into the penalty area (30).

Who gets your captain’s armband for Gameweek 14? pic.twitter.com/g2dphve5lL

Despite City’s unexpected home draw to West Brom, KDB collected two bonus points for his performance which proved on another day he would’ve returned for his FPL managers.

His opponents this week, Southampton, play a high line which the Belgian will look to exploit, and could see similar success that rivals Spurs enjoyed in their 5-2 win against the Saints in GW2.

Creating chances is what he does best, providing 3.3 key passes per game and boasting the highest xA this term (5.38). He’s made the most passes into the penalty area (39), so when City become more clinical KDB will profit hugely.

The Korean has been by far the best FPL asset this season. He’s the top scorer in terms of goals and points, having averaged 0.92 goals per 90.

His partnership with Kane has been key to his success, Kane has assisted Son for eight goals whilst Son has set up Kane for four goals. Just over 60% of Son’s shots have been on target.

At this point not owning could be a big mistake. However, he is owned by more than 60% of FPL managers. It will be interesting to see which of Kane and Son get the armband should both be in your team. According to the odds, Kane has a much higher chance of scoring against Leicester.