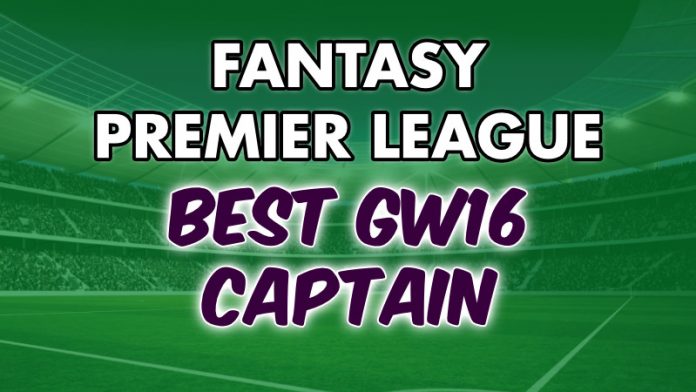 The festive period is bringing us games on top of games and with such a quick turnaround between Gameweeks, there’s no time to boast or complain.

Once again, the importance of the captaincy is crucial as we move into Gameweek 16. Here are some of the best options.

Despite blanking against West Brom, in what felt like a standout captaincy choice, he’s top of the list again. This week he’s away at Newcastle and, fortunately for his owners, he’s scored seven on the road this season.

Top scorer in the league with 13, Salah has only blanked twice when he’s played this season, helping him reach the summit of the FPL points charts. Sadio Mané scored last time out, but being on penalties makes Salah a much better choice than his colleague.

His opponents haven’t kept a clean sheet at St James’ Park all season, and the Egyptian will be hoping to stretch that run on for even longer.

As always, another option that could be captained against almost anyone. He averages a goal or assist every 65 minutes this season and with nine goals and ten assists there’s more chance of him getting attacking returns.

He’s the main penalty taker, making him more likely to score than his teammate, Son, who is another tempting option this week. If Spurs are going to break out of their poor form, they will look to their captain to help them.

The Leicester striker is showing no signs of slowing down this season, scoring eleven times this campaign, with three in his last five. He has the highest xG in the league (11.2) and faces a Palace side that’s conceded ten in their last two games.

Vardy has scored the most penalties this term (6) and despite that has a non penalty xG of 5.9. In his career he has enjoyed playing the Eagles, scoring five times against them. To add to his goals he also has four assists and Palace will have their work cut out trying to stop him.

After playing upfront against Wolves, Son can take advantage of Fulham’s poor defensive record. They have improved in recent games but Tottenham will still consider this one of the best fixtures.

Son has more goals than Kane this season, having found the net 11 times. He’s very efficient, out of his 25 shots he’s scored from 44% of them (11 goals in total). Being a midfielder he could get extra points for scoring and keeping a clean sheet, making him a solid captain alternative to Harry Kane.

When the two combine they are often unplayable, twelve goals this season have involved the pair providing the other to score.

With nine goals so far this campaign, Bamford faces the league’s worst defence in GW16. Leeds travel to the midlands which bodes well for the forward, who has scored seven away from home this term.

With Leeds creating a lot of chances, he averages 3.6 shots per game whilst West Brom allow 16 per game.  Out of all players he has the best non penalty xG (9.6) but did score a penalty against Burnley, so could be on spot kick duty for the foreseeable future.

It would be a bold move to captain him, but one which could reap massive rewards.

In his last home game he came away with two goals and an assist against Leeds, in one of his seven double digit hauls this season.

He ranks second for goal contributions (16 goals and assists) and averages a goal or assist every 70 minutes, making him likely to produce a return every game.

His xA is the joint best at 5.4 and when he’s on form, United are too. Wolves have only scored six times in away matches so far, and could struggle against United.