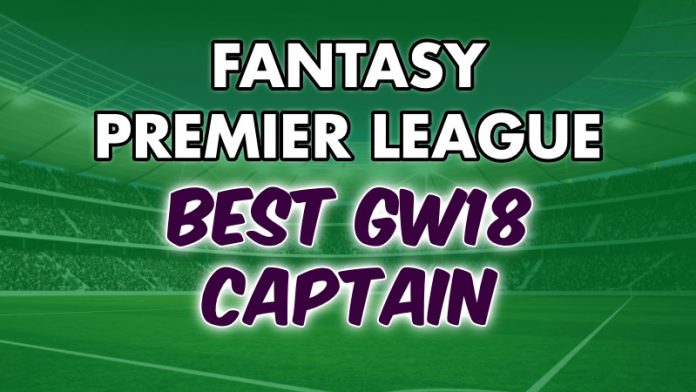 With many teams without a fixture in GW18, some of the usual captain options are unavailable.

Nevertheless, the Gameweek 18 captaincy remains a difficult decision. There are plenty of appealing options and here are some of those top ones. Of course, the likes of Heung Min Son and Raheem Sterling are also top options.

Arsenal’s recent upturn in form can be partly thanks to the great form of Lacazette. He has four goals in his last three games and faces Palace who have the third worst defence (29 conceded), keeping only two clean sheets.

The Frenchman has a real strikers instinct, with a non-penalty xG of 0.44 per 90. He’s very accurate too, hitting the target with 65% of his efforts. He’s the most likely goalscorer in the Arsenal Crystal Palace match, even ahead of Aubameyang!

To no one’s surprise, Kane was once again amongst the points last weekend, registering a goal and an assist. He’s always likely to be on the scoresheet, as he attempts the most shots per game in the league (3.8).

Nobody has more goals + assists this season and against a lowly, albeit in better form as of late, Fulham he is obviously a top contender for the GW18 captaincy.

He’s been the talisman for United this season and the driving force behind his side’s climb to joint top of the table. Away from home the midfielder is exceptional, scoring double-digits in five out of seven away fixtures this campaign.

As Burnley will be expected to deploy a low block, Bruno’s threat from range could be very effective against the Clarets, he averages 1.8 shots from outside the box per game.

As a midfielder he provides better value than forwards, due to the additional point for a goal. His xG per 90 is 0.57, which is very high for a midfielder.

There’s a lot of viable captain choices for the blank filled Gameweek 18.

Who are you going for? pic.twitter.com/aqTHagUL4V

City look like they’re getting back to their best, winning three in a row, and KDB has been ever-present in their side. With City’s attack goals are always a possibility and De Bruyne is the best at creating goal scoring situations, supplying the most passes into the penalty area in the league (45).

He faces Brighton, who are 17th and have conceded ten in their last five matches. The Belgian has a good record against Brighton, beating them 5-0 and 4-0 last season, scoring in the latter. It will be interesting to see his if he’s used in the false 9 role as he was against Chelsea which theoretically only adds to his goal scoring likelihood.

Playing in a team 15th in the table, Callum Wilson is an edgy choice. However, he has bagged eight goals this season, which is 44% of Newcastle’s overall goals. He’s also scored four times from the spot. Moreover, Sheffield United are yet to win this season.

With Newcastle so inconsistent, he is a riskier alternative, but one that could pay huge dividends. If you’re in desperate need of clawing back some points, maybe Wilson could be a big differential captain punt.