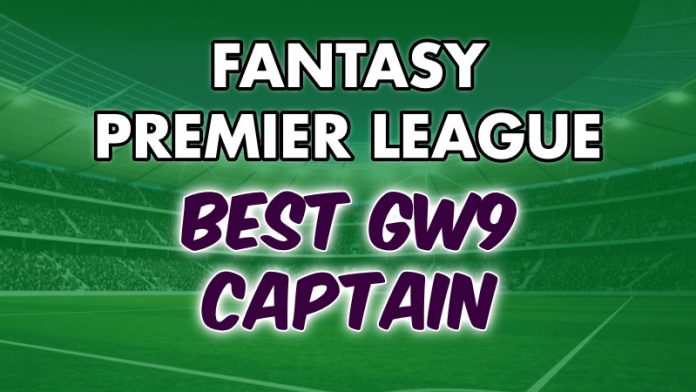 A good or a bad Gameweek is often determined by your captain choice. That’s why your captaincy pick is so important in Fantasy Premier League.

With Tottenham hosting Man City and the notable absence of Mohamed Salah, the Gameweek 9 captaincy is particularly interesting. Here are the best candidates for the armband.

Enjoying his best ever season, he has only blanked once this campaign and is up against a Fulham side who have only kept one clean sheet in their opening eight fixtures. He should get plenty of chances, averaging 0.9 shots from inside the six-yard box per game so far.

It’s always hard to put the armband on a player priced just £7.8m but given the fixture and his returns so far it may well be the best option.

United haven’t won at home in the league so far this season, but they will expect their fortunes to change when they face 18th placed West Brom. The Baggies have conceded 17 goals this season, the joint-worst in the top flight.

The Portuguese midfielder has averaged 2.9 key passes per 90 and has scored five goals, two of which came from the spot.

Marcus Rashford is of course another Man Utd option but he is a slight doubt with a shoulder injury. However, he does have a much better chance of scoring than Fernandes as his implied odds put him at 46%.

Kane has averaged a league-high 4.8 shots per game this season and, on the back of scoring in his last two games, faces a Man City side who have conceded the joint-most goals from penalties this season (4).

It isn’t just goals Kane has been scoring. The Tottenham captain has also produced an astonishing 8 assists. This has resulted in him being the current highest FPL points scorer with 80.

Home or away, facing Man City is less than ideal when it comes to FPL captaincy but given his form he at least needs to be considered.

Mane hasn’t really been considered for the captaincy so far this season due to strike partner Salah. The Egyptian seems to be a little more greedy and is on penalties, two factors which likely sway FPL managers’ minds.

With Salah out of the game against Leicester though, Mane once again becomes a strong option. There is also the slight chance he may step up and take penalties. After all, we all know he wants that golden boot as well.

Who are you captaining in Gameweek 9? 🤔 pic.twitter.com/tIMhamDwS2

Despite having not scored in the last two Gameweeks, his record against City is very good, scoring five goals in ten matches against them.

In truth, given the fixture, he is somewhat of a differential captain pick. However, we have already seen tremendous returns against the other Manchester club already this season.

Of course Utd and City are very different challenges and it would take a risky manager to put the armband on the South Korean.

The Leicester striker is in great form, scoring in each of his last three games, two of which were away from home. Usually we wouldn’t include a player away to Liverpool but given their massive injury problems at the back we can make an exception.

Vardy is also the foxes’ designated penalty taker, scoring five from the spot already this season. If Leicester are going to have success at Anfield then in all likelihood it will come through their number 9.

The German has been in great form of late for both club and country, scoring for Germany in the international break. He will be facing a Newcastle team who have conceded an average of 16.5 shots per game this season, the most in the league.

His initial goal drought was well documented as he failed to score in Chelsea’s first four Premier League games. Since then though, he has scored four in four, accumulating 32 points along the way.