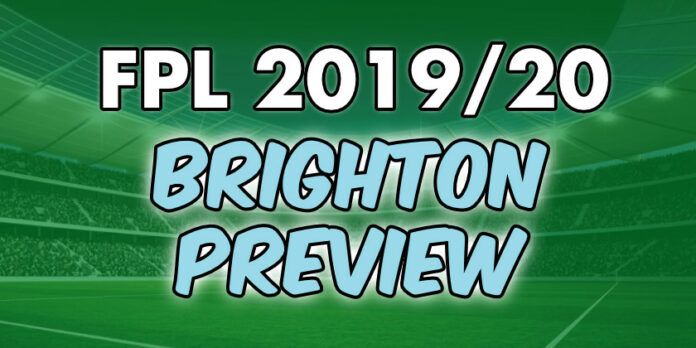 Brighton players have been relatively kind to FPL managers since their arrival in the Premier League. It is their defence that have been the best fantasy assets but it was a forward player who scored the most points for the Seagulls last season.

Brighton avoided relegation by just two points ahead of Cardiff. Their Premier League games averaged 2.5 goals last season but Brighton themselves averaged less than one.

They also scored second fewest goals at home, alongside Crystal Palace, averaging just one a game. This doesn’t make their attacking options particularly appealing but despite this stat, Glenn Murray returned 129 points last time out.

Brighton also took the second fewest shots in the Premier League last season, with only Burnley trailing them. It is also Burnley they are alongside in relegation odds, with both teams joint third likely to do drop down into the Championship.

Good Fixtures to Kick Off the Season for the Seagulls

Brighton’s opening three fixtures may tempt some managers to invest with Watford (a), West Ham (H) and Southampton (H).

However, three away games in the following 5 including fixtures against Man City, Chelsea and Tottenham is a lot less appealing – it doesn’t get a lot worse than that.

If some managers are intent on an early wildcard then there is opportunity there but outside of that Brighton players aren’t the best options. 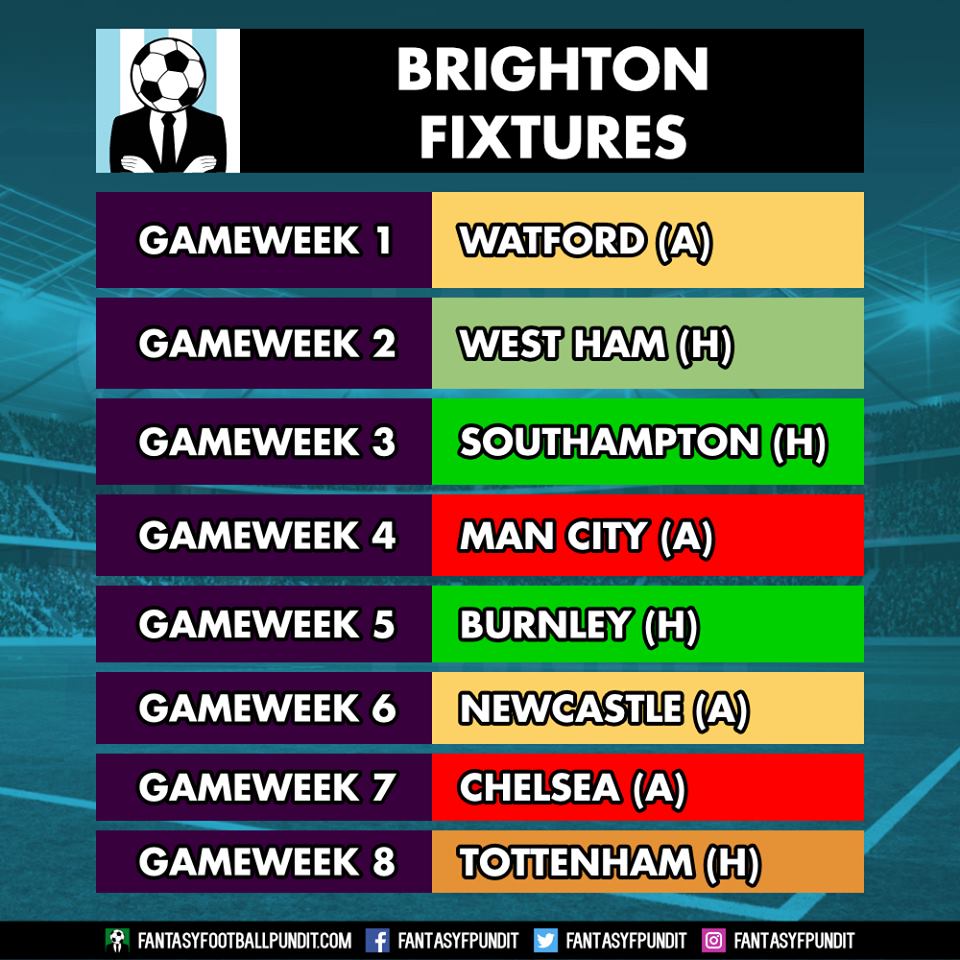 Brighton’s FPL options are somewhat limited given their overall lack of attacking threat.

Most of the interest will come in defence which is evidenced by their goalkeepers and defenders being significantly more picked than their midfielders and forwards.

Brighton’s supposed back up keeper David Button is currently picked by more FPL managers than Mathew Ryan. It is Ryan who is expected to start the season.

A lot of managers may be confused by this stat but it’s a strategic move. Button is one of five £4.0m goalkeepers, of which is most likely to start. With only two goalkeepers listed for Brighton, one of him or Ryan are going to start.

The tactic here is if you pick the both of them, you have a guaranteed starter in goal for just £8.5m – the cheapest combination you can do to have a starting goalkeeper. This will leave some weeks where the returns are poor, Man City (a) etc, but does maximise funds elsewhere.

Also, Ryan has scored 250 points over his two seasons in the Premier League and this is little doubt he’ll be making plenty more saves over this campaign.

The ever present defensive pairing get attention due to their starting reliability and goal threat. Lewis Dunk (£5.0m) scored twice last season with one assist – his partner, Shane Duffy (£4.5m), scored an impressive 5 goals and provided two assists.

However, just seven clean sheets dampened their final FPL points total. Based on these attacking stats, Duffy is the better choice but is £0.5m more expensive.

As of writing they are surprisingly under-picked as neither of them have a selection percentage of more than 10%.

Is Shane Duffy worth the extra £0.5m ahead of Lewis Dunk? #FPL pic.twitter.com/QDq3UXpmy5

Pascal Gross (£6.5m) was a surprise package in the 2017/18 Fantasy Premier League season. He provided excellent value for FPL managers, scoring 7 and assisting 8. However, he was unable to replicate that last season scoring three and assisting just as many.

If the Belgian can return to his first season form, then at £6.5m, he’ll be an excellent choice.

That’s if he starts though, as Leandro Trossard (£6.0m) has been seemingly brought in to replace him in the number 10 role. He has so far been deployed behind Glenn Murray and Jurgen Locadia.

Trossard brings a good goal scoring record from former club Genk (34 in 103) but it would be risky to include him given Brighton’s fixtures and other FPL options out there.

Glenn Murray (£6.0m) continues to be ignored by FPL managers despite scoring 13 last season – one more than he managed in 2017/18.

Maybe he isn’t particularly good on the eye or maybe his age at 35 is putting managers off. This is speculative but what’s an absolute fact is that he is the top scoring forward in the bracket of £6.0m or under. His 129 points from last season beats Dominic Calvert-Lewin’s 92, which was the second highest.

He is currently picked by 3.8% suggesting he is once again being overlooked by the bulk of Fantasy Premier League bosses.

How Will Brighton Lineup on The Opening Day?

Brighton’s opening fixture is away to Watford. Their predicted starting lineup, along with all other clubs, will be available on our Fantasy Premier League Team News page shortly.