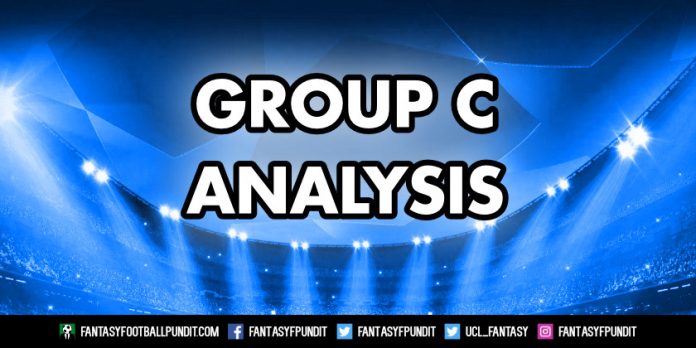 There are few easy fixtures in the Champions League and Group C is no exception. Here’s some analysis discussing which players are best for UCL Fantasy.

Man City are one of the best teams in the world, so it’s no surprise to see them clear favourites to not only qualify from Group C, but win it too.

Behind them it could be quite a close affair, with FC Porto, Olympiacos and Olympique Marseille all having decent chances to qualify for the 2nd round. Nevertheless, Porto are more than likely to qualify, at least according to the odds.

Anyone brave enough to not pick a Man City player?

They have a 96% chance of qualifying from Group C! pic.twitter.com/fYbxkctxbj

De Bruyne and Sterling must have?

Man City’s assets are obviously highly sought after in Fantasy Premier League. So it should come as no surprise they should also be popular in UCL Fantasy.

Ederson for €6.0m starts in goal and could be a viable yet expensive set and forget option, considering their decent fixtures.

Meanwhile, City’s backline has always been a little leaky, especially recently. The most nailed on defender Aymeric Laporte could still offer some value at €5.5m, though.

In midfield it’s basically the same story as in the FPL.

Kevin de Bruyne is the equal second most expensive player in Champions League fantasy at €11.5m. However, the Belgian is all but certain to miss Matchday 1, perhaps making tough decisions around his inclusion easier.

Fellow standout Raheem Sterling is a little cheaper at €10.5m. Despite being cheaper, Sterling actually outscored De Bruyne in last season’s Champions League. He has also out scored KDB in two of the last three seasons in Fantasy Premier League.

With home games against Porto and Olympiacos in the first three Matchdays, there might be some attacking returns on the cards. These early home games will certainly make de Bruyne and Sterling prime captaincy options. However, the risk of them missing out due to “Pep roulette” is always something to note.

The currently injured forwards Sergio Agüero (€10.5m) and Gabriel Jesus (€9.5m) may also become options soon, although Matchday 1 is likely too early for their returns.

A good looking run of fixtures

For the other three clubs, there are also a few options that could come into consideration.

Porto could warrant some investment in one of their cheap and mid-priced options before a run of games against Olympiacos (H), Marseille (H) and Marseille (a) from Matchday 2 to 4.

In midfield there are potential options at several price points, with Jesús Corona (€7.5m), Otávio (€7.0m) and Sérgio Oliveira (€6.5m). All of them have already scored and assisted during Porto’s opening three league games of the season.

Moussa Marega is their main option in the forwards category and will set you back €8.0m. He has three attacking returns to his name since the start of the 2020/21 season.

Confirmed most expensive players in #UCLFantasy:

At Olympiacos, starting keeper José Sá (€4.5m) could be part of a rotating keeper option, with Porto (H) and Marseille (a) as his opening two fixtures.

In defence the Greek side also offers options at €4.5m, including former Watford left back Jose Holebas, although the signing of Rúben Vinagre may cause some uncertainty over his starting role.

Rúben Semedo for €5.0m may be worth the extra outlay here, after registering two goals during last years group stage.

Midfielders Georgios Masouras and Mathieu Valbuena (both €7.0m) could get returns in the opening two fixtures against Marseille (H) and Porto (a) but the duo do seem to be a bit overpriced.

The same can be said about Youssef El Arabi, who will unlikely get too much interest at an interesting price of €8.0m.

Marseille starts away at Olympiacos which can be a very tough fixture, followed by a home game against Man City which makes their options nothing more than a punt. With that said, Olympiacos without their infamous fans behind them, may not be so intimidating.

Man City coverage in some form seems essential in this year’s Champions League fantasy game. Porto, Marseille and Olympiacos’ players can be invested in but it’s probably wise to stick to their cheaper assets for differential options.