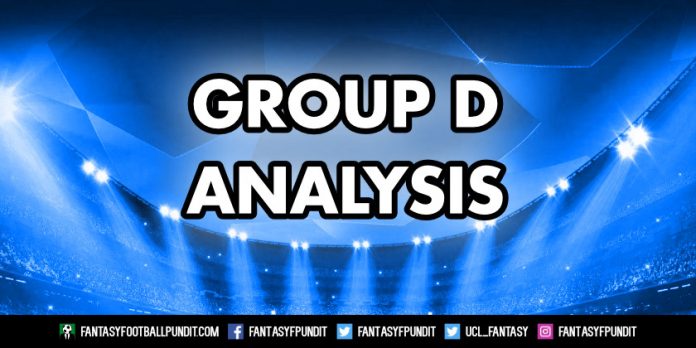 Group D looks like one of the most exciting in this season’s Champions League. There are many options to consider for UCL Fantasy, as a result.

On paper this group looks very promising for goals and attacking football in general.

Do fixtures against tricky teams such as Ajax and Atalanta put you off Liverpool players?

The Reds have a 93% chance of qualifying from Group D! pic.twitter.com/pmzOrtmT2p

With Alisson (€6.0m) being out for a while, this enables a cheap route into Liverpool’s backline with Adrian (€4.5m). Although their defence doesn’t look as solid with him in the team, the pricing still makes him a tempting option for a keeper rotation pair.

In defence both full backs Andy Robertson and Trent Alexander-Arnold have been priced at €6.5m, making them the joint most expensive defensive picks in the game. And while they have been racking up goals and assists in FPL, it was a different story in last seasons UCL fantasy game with only one goal and one assist between them.

The pick of the Liverpool defence actually was €6.0m option Virgil van Dijk, who accrued 24 points for recovered balls alone – more than Robertson and Alexander-Arnold combined. Unfortunately, van Dijk picked up what looks to be a very serious injury, meaning he will miss, at a minimum, Liverpool’s opening Champions League fixtures.

In midfield and up front we have a similar picture to the Fantasy Premier League game.

They might get returns against Ajax (a) in week one but the clear stand out fixture for them is their Matchday 2 home game against UCL new boys Midtiylland.

It depends on your strategy with the wildcard chips, but I would certainly suggest picking at least two Liverpool assets for for the meeting with the Danish side at Anfield.

Most expensive defenders in #UCLFantasy:

Davies and Ramos the most picked of these 👀

Behind the favourites Liverpool, it will likely be a close race between Ajax and Atalanta for the second qualification spot. Two exciting teams, who also offer some nice Champions League fantasy options.

In goal we can select André Onana and Pierluigi Gollini, who both come in at €5.0m. It looks like Onana will be selected for at least Matchday 1 though, as Gollini is injured.

Out of those two Gollini seems the better option short term, as Atalanta’s first two fixtures are looking a bit better than the ones for the Dutch side.

Meanwhile, there are some attacking defenders to choose from both these clubs.

Atalanta’s attacking wing backs Robin Gosens for €5.5m and Hans Hateboer for €5.0m both look like good options for the first two games.

Over at Ajax, Nicolás Tagliafico for €5.0m is also no stranger to attacking returns with three goals and two assists in his last two UCL seasons.

Further up the field in midfield it’s looking similar. Atalanta’s Josip Ilicic priced at €9.0m, is only picked by 2%. This is despite scoring four times against Valencia in March. €9.0m is a lot to part with for an Atalanta midfielder. He has also been out of the squad for personal reasons for a few months.

Should Ilicic not quite be ready, the €7.5m option Mario Pasalic could prove a viable but slightly overpriced alternative.

Ajax as strong as they were?

At Ajax there is Quincy Promes for €8.0m, who scored four goals during last years Champions League group stage, as well as Zakaria Labyad for €6.0m. Labyad has only played as the central forward in Ajax’s league games this season so far, which makes him an out of position asset. However, bear min mind that he didn’t play more than 70 minutes in any game over this period.

Up front Dusan Tadic looks overpriced for €9.0m, while his new teammate Antony for €6.0m could prove far greater value. Antony started all four league games for Ajax on the right wing, scoring two goals for his new club.

At Atalanta there appear to be two stand out striker options. Duván Zapata, altough being quite expensive at €9.5m and Papu Gómez for €8.5m could prove to be nice options with games against Midtiylland (a) and Ajax (H) coming up.

The fourth team Midtiylland are definitely the clear outsiders in this exciting looking group, so I would stay clear of their UCL fantasy options for now.