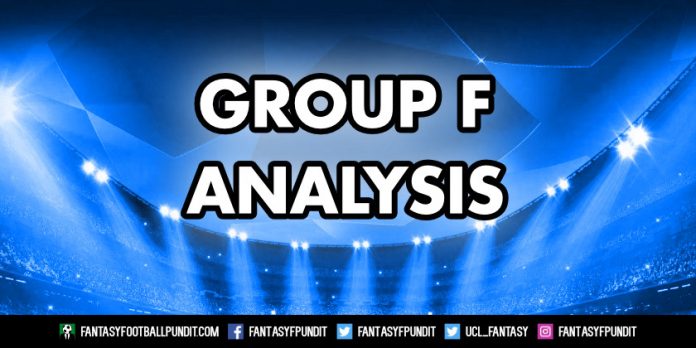 Champions League Group F looks it will be more one of the more closely contested ones. We analyse which players you should take notice for UCL Fantasy.

In a quite balanced looking group, Dortmund are the favourites to progress to the next round.

Goalkeeper Roman Bürki who is an injury doubt at the moment, looks to be overpriced at €5.5m.

In their defence you can get starting assets for €5.0m, with the attacking full back Thomas Meunier probably offering the best value. Raphaël Guerreiro for €6.0m may be an option too, but his starts don’t look to be certain.

In midfield and upfront, Dortmund offer plenty of potential options.

Erling Haaland is their most expensive option at €11.0m after having started last season as a €4.5m Salzburg forward. UCL Fantasy managers who invested in him from the start certainly reaped the rewards.

The Norwegian scored an incredible 8 goals during last years group stage, underlining that he should still be able to live up to his hefty price tag.

Jadon Sancho will also be strongly considered at €10.0m. Doubling up on him and Haaland may be too risky, however.

A far cheaper alternative to the expensive Sancho could be offered by Giovanni Reyna, who comes in at €6.5m. Reyna scored once and assisted four times already over the opening three rounds of the Bundesliga season. He’s only 17 years old though, so some rotation and managing of his minutes surely will be on the cards.

The most selected midfielder in UCL Fantasy

Elsewhere in the group, Zenit Saint Petersburg will fancy their chances against Brugge in week one.

Zent goalkeeper, Mikhail Kerzhakov, comes in at €4.5m and could work as part of a rotating keeper.

In defence Douglas Santos seems to be the stand out option for €4.5m, with a goal and an assist so far this season. Former Liverpool defender Dejan Lovren should also offer some goal threat but he costs €5.0m.

€4.5m option Wilmar Barrios is currently is the most selected player in the game. He started all of Zenit’s league games in the double pivot this season.

Other players like Aleksandr Erokhin for €5.0m should offer far greater goal threat though, if he gets enough minutes.

Up front Artem Dzyuba and Sardar Azmoun (both €8.0m) look like viable differentials.

Dzyuba is the clubs captain and has had seven goal involvements over his last four games of the Russian league.

Zenit’s line up against Brugge will be out ahead of the first deadline, with the match against Brugge already starting at 18:55 CET. This is an important tactic to take advantage of when formulating your teams.

Only Neymar, Sterling and Mane are picked by less than 10% of #UCLFantasy managers…

After getting decent returns in the UCL Fantasy game two seasons ago, Vanaken has scored five times in his last five league games.

Ruud Vormer for €5.5m is the cheaper alternative though, having also got returns in the league in 2020/21.

Italian side Lazio, also are offering some quite decent options.

While their keeper Thomas Strakosha looks a bit expensive at €5.5m, the Spanish €4.5m defender Patric has started all Serie A games so far this season and could offer some value.

Manuel Lazarri is a nailed on started at right wing back but has been added to the game as a €5.0m midfielder. The reverse out of position asset, scored once in the clubs first three league games. Due to this position, he will definitely be less appealing.

In midfield there appear to be three stand out options, with Luis Alberto for €8.5m, Sergej Milinkovic-Savic and Joaquín Correa who both cost €8.0m.

While the former duo act in central midfield, Correa plays as the 2nd striker alongside star striker Ciro Immobile who is the most expensive Lazio option for €10.5m.

In all competitions Correa scored ten times last season, Milinkovic-Savic eight times and Luis Alberto seven times, suggesting there might not be much between them from a goalscoring point of view. All of these maybe a little on the expensive side to invest in, especially considering how close Group F could be.