After three long weeks Champions League fantasy football returns! We preview Matchday 3 of UCL Fantasy looking at the fixtures and which players you want in your team.

From a Tuesday perspective, the teams we favour most are; Shakhtar, Atletico Madrid, PSG, Bayern Munich, Tottenham, Man City and Juventus.

If you’re going for a premium option, Ederson and Oblak are the best buys as both have favourable home fixtures. When looking at the cheaper options, almost certainly slot in for the injured Lloris and while Tottenham are on a bad run of form, this is an ideal fixtures to try gain some momentum.

Shakhtar’s defence is a cheap option to look at if your budget is tight. Elsewhere, PSG’s full backs have provided some great returns and could very well continue to this campaign. However, Man City, Atletico Madrid, Juventus and Tottenham are the most likely sides to keep clean sheets, so these are the defenders you should be aiming for. 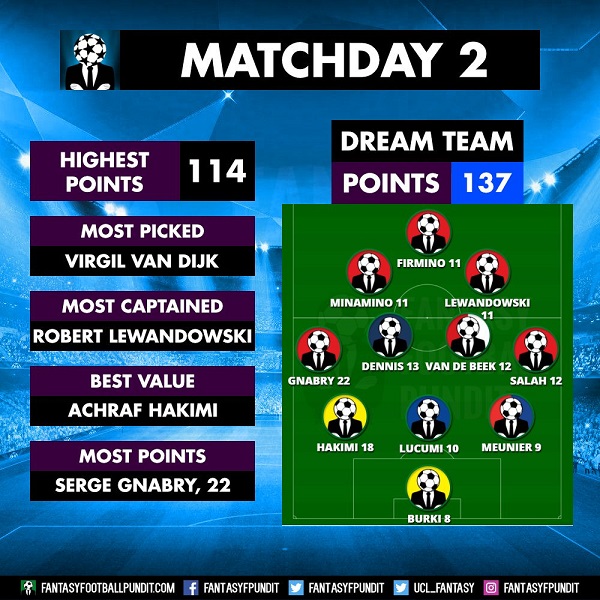 This is where it gets tricky considering there are a bunch of options to pick from. Bayern’s Serge Gnabry scored a goal in their draw against Ausburg over the weekend to maintain his good form. His 8% selection percentage makes him a good differential.

Champions League fantasy managers will of course be earmarking the Man City vs Atlanta fixtures. One prospect is Mahrez who was rested against Crystal Palace over the weekend and will therefore be expected to start midweek.

We would avoid Real Madrid midfielders, especially Hazard. Their relative poor form has been well documented and an away trip to Turkey doesn’t scream goals.

Di Maria also scored twice against Nice over the weekend in there 4-1 victory, making him an attractive option as well.

Man City are playing at home in arguably as good of a fixture as they could have against Atalanta. With Aguero being rested over the weekend, he will be an expected starter. He has only failed to score in one game at the Etihad that he has started this season, which was in the last MD in the Champions League.

Mbappe was brought on as a late sub in the Nice game where he went on to score moments after being introduced. The World Cup winner might be lacking minutes but we wouldn’t put it past him to accrue some points in MD3.

Lewandowski is another striker we cannot ignore with the form that he is in and Ronaldo added to his goal tally over the weekend, too.

The set of fixtures on Wednesday is a little more tricky than the ones on Tuesday. The teams we’d focus on are Liverpool and Barcelona since the other 6 fixtures will be tough to predict as they can go either way.

Alisson made his comeback from injury and will therefore be expected to start for Liverpool at Genk. Ter Stegen kept a clean sheet v Eibar on Friday and is a top premium pick, despite being away from home, if you have the cash to spend there.

If you’re going with a premium defence strategy, having a Liverpool full back is a must. Alexander-Arnold and Robertson haven’t hit the heights of last season but could be effective against a poor Genk defence.

Ajax face a tricky home fixtures against Chelsea but we’d suggest holding if you have the likes of Tagliafico.

Pizzi is a standout differential option that we can probably gamble on as he continued his domestic form with a great performance over the weekend.

The biggest worry for most UCL Fantasy managers will be Salah’s fitness as he missed the game the crunch game against Man Utd. Klopp may not risk him in a relatively easy fixture at Genk if his fitness is a concern. Mane provides a very good alternative on that front for those interested in owning Liverpool attacking option.

MSG (Messi, Suarez and Griezmann) all scored together for the first time over the weekend and have a great fixture against a weak Prague defence. Messi looks to be slowly returning to his best after coming back from injury whilst Suarez remains a very safe forward option to bank on.

Haland owners can take the gamble since he’s a massive enabler and Napoli’s defence isn’t impenetrable. Firmino was a high scoring option last MD and Origi might be tempting for differential seeking managers.