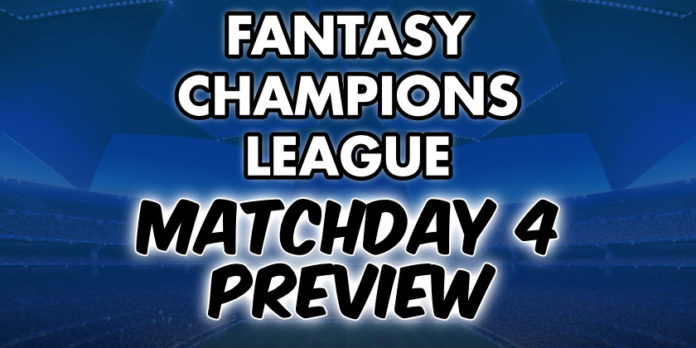 Champions League football is back and UCL matchday 4 starts tonight! That means it’s time for UCL fantasy managers to get back to the drawing board to reinvigorate their strategies and make impactful transfers to stay on top or claw their way back up the leaderboards. In this article we have tried to give readers a comprehensive guide to the players to watch out for in Champions League matchday 4. We also look at fixture difficulty and list injuries/suspensions to help managers plan their retention and transfer strategies in a well-informed way.

It has been a season full of ups and downs for the English captain. He has not been in his best form but when he has found his footing, he has looked deadly enough to get a haul. He scored this weekend in the Premier League and was more than willing to take a dig at the opponent goal whenever a chance presented itself, inside or outside the box. In the Champions League, Kane has looked lively and has scored in the last two matches. He looks to continue that run at home against PSV Eindhoven. This is a do-or-die match of sorts for Tottenham who have failed to capitalize on Kane’s goals and have just one point from the first three games. If Tottenham are to overcome the odds and go through Group B then it’ll likely be through their talisman. Hence, we highly recommend Kane for MD4 not only as a transfer but also as a captain pick for Day 1.

After just 1 point from their first 3 matches in the Champions League, Tottenham will need their star man to find some goals if they are to qualify from Group B!

He has 2 goals already and is selected by 4% of Champions League fantasy managers already.#UCL #UCLFantasy pic.twitter.com/G3Tud5J17M

Edin Dzeko loves the Champions League! And as a result Champions League fantasy managers who own Edin Dzeko love him. The Bosnian has 5 goals already in the competition meaning he is the UCL top scorer alongside Lionel Messi. He came close to scoring many times in the group opener against Madrid and followed that effort with a fantastic hat-trick against Plzen on MD2 and brace + assist effort on MD3. He has had 11 shots on target in the competition this season, which is the highest in the competition so far. A must pick as he comes substantially cheaper than the likes of Ronaldo, Neymar, Cavani etc. As UCL Fantasy price changes will come into effect right as MD4 deadline closes, Dzeko is a must-have ahead of this week as his price is surely going up.

Paris Saint-Germain (PSG) have had contrasting showings in the competition so far. They started the campaign losing to Liverpool at Anfield and needed a last gasp equalizer to steal a point at home against Napoli, whom they face in the reverse tie. However, in between these 2 ties, PSG thrashed Crvena Zvezda and Neymar scored a scintillating hat-trick. He has failed to score in the other 2 ties but has had 10 shots on target in the 3 games, only second to Edin Dzeko. The Brazilian is the key man in the much coveted PSG attack trio and on his day is nearly unstoppable as Crvena found out on MD2. PSG needs to win this one if they are to qualify for the next round. Being on penalty duties, his appeal is more than his attack partners, Kylian Mbappe (£10m) and Edinson Cavani (£11m). Along with Kane, he too is a prime captain option on Day 1 (along with a couple of Liverpool attackers whom we discuss later in the article).

Robert Lewandowski is clearly Bayern Munich’s premium Champions League fantasy asset. He may appear expensive at €11.0m, but on his day Lewandowski can easily outscore any player in the world. He has scored twice so far in the competition. Bayern’s MD4 opponents, AEK Athens has already faced his brunt on MD3. The Greek side have been defensively poor and have conceded 7 times in the first 3 games. This count is only expected to increase as they travel to Munich to face the Bundesliga champions and most of the attack will inevitably go through Lewandowski. The Polish international has not scored since his goal at Athens, but if you are looking to cash in on Bayern’s fixture ease this week, Lewandowski is surely the player to go to.

The Mali forward has taken little time to establish himself as the main man at Porto after Vincent Aboubakar was sidelined for a lengthy period of time. He has been prolific this season, having scored 5 times and providing 3 assists in 11 appearances in all competitions. He has seemingly taken over the penalty duties from Alex Telles, as he scored from the spot against Lokomotiv Moskva on MD3. They face the Russian side again this week, at home this time which will make Marega a bigger threat. If you are looking for a differential attacker in your team this week, Marega (owned by a mere 3% of UCL Fantasy Managers) is your answer. He has had attacking returns from all 3 games in the competition so far and at a budget price, he is delivering more than expected at the moment.

Mohamed Salah is back in goal scoring form and is now playing as a centre forward. His brace against Red Star in MD3 also shows he on penalty duty in the absence of James Milner. Interestingly, Red Star don’t have the best home record, conceding 10 goals in 3 games in UCL. Liverpool are odds on to score two or more against Red Star and if that happens, Salah would be the player you would want in your squad. He can also be an excellent captain option for day 1.

Sadio Mane’s return to form after a thumb injury has been marked by a goal and a penalty earned in UCL MD3. He also scored a brace against Huddersfield in the Premier league where he has already scored 6 goals in 10 games this season. However, he couldn’t convert the penalty in MD3 thus having an eventful match with ups and downs. He returned his owners with a decent 8 points which could have been easily 15 has everything gone his way. Along with Salah, Mane is the go to man in the Liverpool attack and comes €2.0m cheaper making him worth the price. He also can be a differential captain choice on Day 1.

Lionel Messi is surprisingly part of the Barcelona MD4 squad but his minutes will almost certainly be limited from the bench. The Brazilian international, Philippe Coutinho, is the main creator in Barcelona attacking force along with Luiz Suarez. He is also going to play in the more advanced position as the left striker which should only increase his attacking threat. Currently his form has also been good with a goal and an assist in the away game against Spurs. Though he didn’t score at home against Inter, he came very close and even hit the post once. He is the go-to man in Barcelona attack for MD4 also and is relatively cheap at €8.5m.

Sterling has started this season from where he finished last season. Last season’s free-scoring City winger has been doing that this season too for both in club and country. Despite not finding the net in this competition, he has been very threatening so far. His form in the PL has been excellent with 6 goals and 5 assists already. He is expected to carry this form in UCL as well which makes him the best option to cover the Man City attack. Shakhtar Donetsk have also conceded 7 goals so far in this competition and so Man City, should they perform, are expected to find a comfortable victory here.

How has Ziyech not scored yet? Fantasy managers who own him has been left to scratch their heads, and so has been anyone who watched him in the first three matchdays. Ziyech has had 18 attempts to goal, the most by anybody in the competition so far. Out of them, 7 have been on target and 5 have been blocked inside the box. Yet he still hasn’t scored. His lack of goals may put a lot of Champions League fantasy managers from buying him or even hold him in their sides. Nevertheless, we recommend holding on to this Turkish gem throughout the group stages. He has a natural ability to create goal scoring opportunities (he has delivered 16 crosses in the box so far) which adds to his appeal in any fantasy side. Ziyech has been in prime scoring form in the Dutch Eredivisie this season having recorded 6 goals and 3 assists already. With Ajax looking to cement their Round of 16 spot this week as they travel to Benfica, Ziyech could be pivotal in this.

UCL is back. Tough fixtures for the Moroccan, but with an ownership of 2% he could be a good differential option! #UCLFantasy pic.twitter.com/ocl1tNaN6C

A hat-trick of assists. Does sound interesting, right? Well that’s Jordi Alba for you against Spurs on MD2 and then he scored that late goal against Inter in MD3. Inter away may not be the best fixture to bring him in, but with his current form he can damage any opponent. Alba matches fellow premium defenders such as Sergio Ramos and Marcelo, and has even surpassed them so far.

The Scottish captain has been nothing but clinical this season. Liverpool have been very solid defensively. Therefore, the clean sheet points of Robertson against Red Stars who have only scored 1 goal so far in UCL is likely. In addition, he is a continuous threat pushing forward at every available opportunity down the left. We believe Andrew Robertson is the go to man to gain Liverpool coverage in defence. Especially against a relatively poor Red Star Belgrade side.

A home fixture to AEK Athens makes Matt Hummels a good pick. He scored in MD2 also. AEK doesn’t offer a whole lot in attack scoring just 2 goals while conceding 8 times and Hummels will be odds on to keep a clean sheet. As evidenced in MD2 there is also the chance of attacing returns. If he’s in your team already, then he’s a set-and-forget option for the rest of the group stage. As a fresh pick, there’s every reason why managers will pick him despite being on the expensive side.

Manchester City have been solid, to say the least at the back this season. With 7 clean sheets in 11 Premier League games, that form is translating into Champions League as well. After conceding twice in the opening fixture against Lyon, the English Champions have found their footing and have conceded just one goal in the next two. They also have a clean sheet against the same opponents they are facing this week, Shakhtar Donetsk. Without their playmaker Marlos and the lively Taison, Shakhtar is not expected to trouble City much on MD4. The best bet from their defence is their Brazilian shot-stopper Ederson Moraes. With Pep Guardiola expected to do rotations ahead of the Manchester derby this weekend, the likes of Benjamin Mendy (€6.0) and Kyle Walker (€5.5m) have a chance of being rested. However, Ederson is nailed on with the 2nd choice Claudio Bravo still injured.

The former Spain and Real Madrid captain has taken no time to find his footing at Porto. He has given the Portuguese champions the defensive stability they were lacking for so long to potentially take them far in the Champions League. This season, the experienced custodian has been in excellent form, having conceded just 2 goals in the 270 minutes in the competition so far. Furthermore, he has made 8 saves which have added to his points tally. Up against Lokomotiv Moskva in MD4 at home, Casillas can well reward his owners with a clean sheet and save points to earn valuable differential points.