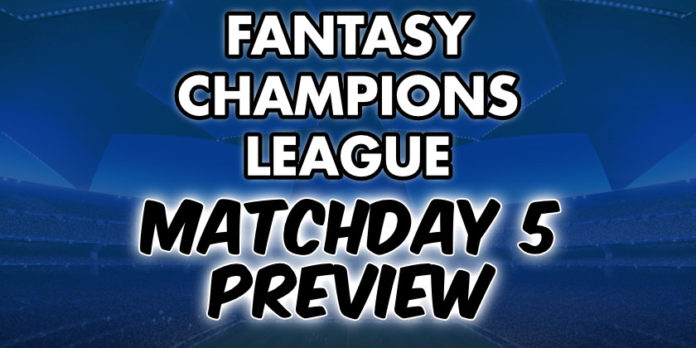 We all know the Champions League captaincy works very differently to Fantasy Premier League. It is a more forgiving decision whereby if it doesn’t go right for you on the first night, you have Wednesday night’s action to fall back on. This of course means you need to captain a player from Tuesday night first. The first night of Matchday 5 sees some top teams play although two of those, Real Madrid and Man City, face tricky away fixtures. As a result this could rule them out the captaincy options. Two appealing options could be Man Utd hosting Young Boys and their group rivals Juventus at home to Valencia. However, the clear fixture for the Tuesday night captaincy is Bayern Munich vs Benfica.

Whenever a Champions League captain is mentioned, Ronaldo won’t be far away from the discussions. Valencia are a game side but with Juventus looking better than ever (despite a surprising defeat to Man Utd in matchday 4) Ronaldo is at the forefront. He scored his first Champions League goal in that match against Man Utd. Somewhat surprisingly though he is only on 6 points for the season. This is because of a red card and subsequent suspension early in the campaign.

On paper Man Utd hosting Young Boys would appear a comfortable fixture. The current Man Utd team have a habit of making what should be routine wins into marginal performances and even dropping points in them. Martial has been Man Utd’s best performer this season and looks to be Man Utd’s most likely starter and biggest threat. He has only scored once in 284 minutes played in the Champions League this season. Nevertheless, with a selection percentage of 3% he offers a lot of differential value.

The Bayern Munich ever-present is the second highest points scorer in this season’s fantasy Champions League. Bayern Munich are struggling domestically but appear in slightly better form in Europe. Benfica at home, whilst not a pushover by any means, is a fixture Bayern Munich will hope to win comfortably. It is a fixture Lewandowski will be hoping to add to his four Champions League goals already this term. Along with Ronaldo, Lewandowski will undoubtedly be a popular captain pick for Tuesday night.

Moving onto the Wednesday night action and the fixtures aren’t as conclusive. Tottenham host Inter Milan in a must win game for the London team. As a result Kane will lead the line and will be Tottenham’s primary threat going forward. His two late goals against PSV proved his importance. Impressively, Kane has scored in each of his last three Champions League fixtures. Consequently, he might be the best captain choice for Wednesday night. An interesting note to this is the England captain is only picked by 4% of Champions League fantasy managers.

It almost doesn’t matter who Barcelona are playing, when Messi is involved you could stick the armband on him regardless. Despite playing just two Champions League games, Messi is the equal top scorer in the competition with 5 goals. That is a goal every 36 minutes, testament to his ridiculous ability. A victory over bottom of the table PSV, would all but secure Barcelona finishing top of the group. With a group victory on the line and Messi missing the last two matches, he is almost certain to start.

The World Cup winner rarely has a poor game. His consistency is a trait of his that perhaps flies under the radar. He has returned in three of Atletico Madrid’s four games and has played in every minute. Group A is a two horse race between them and Dortmund, so you can be confident Atletico will be pushing for that first place finish. Last season’s Europa League winners face bottom of the table Monaco. Therefore this justifies an Antoine Griezmann captain selection for Wednesday night.