Chelsea command attention from Fantasy Premier League managers in any given season. Invariably they have finished in the top 4 over the last two decades making their players, at the very least, worth careful consideration.

Let’s check how they performed last season, what fixtures they start this campaign with and their best FPL prospects.

After a hard fought battle to secure Champions League football, Chelsea actually pipped Tottenham to 3rd place come the end of the campaign.

Interestingly they scored the fewest goals of the top 6 sides. Their home form was impressive – losing just once – and their away form, while far from exciting, did yield positive results. They scored just 24 goals away from home last season.

However, as Frank Lampard has taken over as Chelsea manager, presumably ushering in an entirely different system, these stats don’t hold the same weight as they would if Maurizio Sarri was still in charge.

Can Chelsea’s Fixtures Be Ignored?

Chelsea might start the season with a far from ideal trip to Old Trafford, but their following fixtures almost require coverage. Their next three contain home fixtures against Leicester and Sheffield United, with Norwich away sandwiched in between.

Those three fixtures are so appealing for a club like Chelsea that you should have at least one of their players for Gameweek 2 to 4. However, Wolves and Liverpool after that don’t make for good reading which is why you shouldn’t over commit. 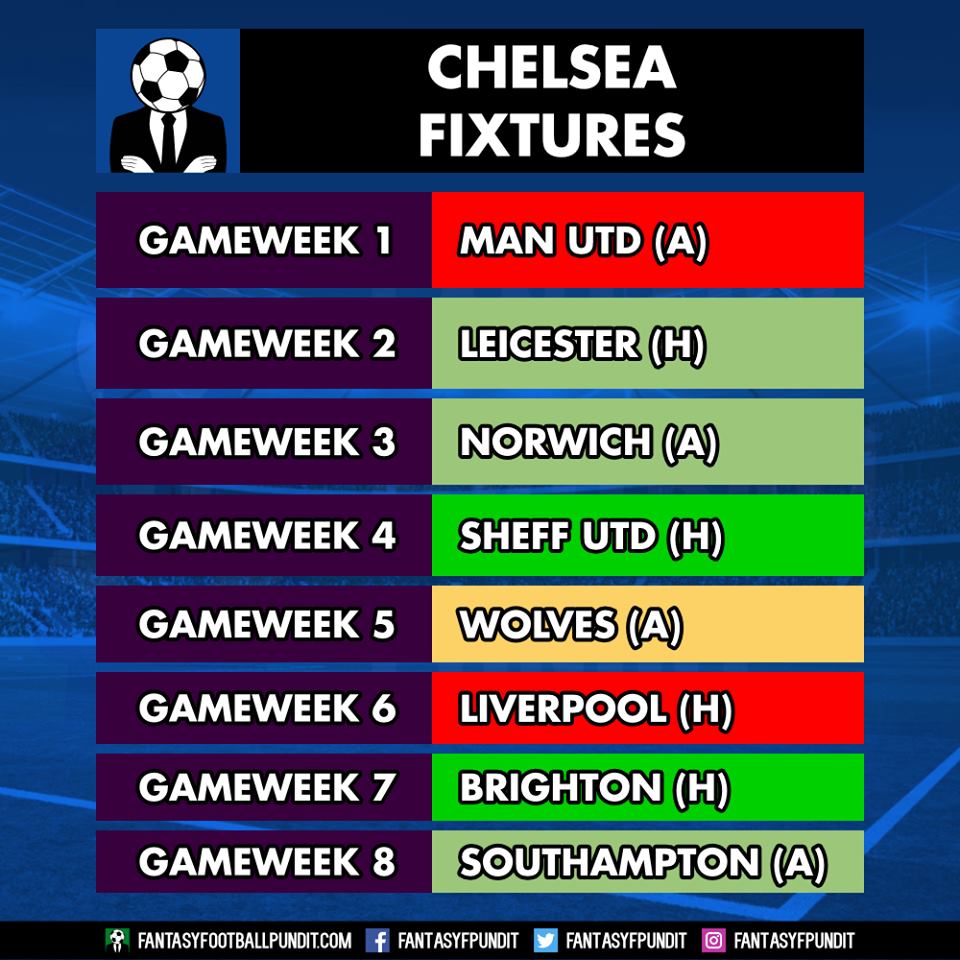 There are no shortage of Chelsea options to ponder ahead of the new season. Relatively cheap prices for a club of the Blues stature mean all positions have viable options. This, combined with the aforementioned fixtures means plenty of FPL managers will be assessing their players.

Starting with the goalkeeper, Kepa Arrizabalaga would be a good option to have. The question is if he’s worth the extra £1.0m compared to other goalkeepers.

Chelsea kept the third most clean sheets last season with 16. Encouragingly for Fantasy Premier League managers who do go with the Chelsea defence, they also kept 15 and 16 in the preceding seasons, suggesting they are more than capable of doing so again.

We would stick with the £4.5m goalkeepers though, as that extra £1.0m can make a huge difference elsewhere.

Cesar Azpilicueta has the uncanny knack of consistently scoring well on the bonus points system (BPS). The Spaniard scored 822 BPS last season, finishing only behind Virgil Van Dijk and Andrew Robertson, who themselves had incredible seasons.

The Chelsea captain has also been equally consistent with his goals and assists. In the last four seasons he has at least one goal and five assists in each of them.

It gets better though, while the premium Liverpool defenders are £7.0m, Laporte £6.5m – Azpilicueta is a bargain at £6.0m. Relatively, he has flown under the radar so far, being picked by just over 10%.

No wonder Van Dijk is currently the most picked player.#FPL pic.twitter.com/l4TQCLjvzC

Luiz Worth The Risk?

The temperamental David Luiz is the same price at £6.0m. He had his best scoring season last year with three goals.

While he is considered hot-headed by many, he did get one fewer yellow cards than Azpilicueta and only has one red in his Premier League career.

The Brazilian is on free kicks (sometimes) but this doesn’t outweigh the consistent threat Azpilicueta offers.

That’s the question a lot of FPL managers are asking. A year ago it would have been unthinkable that Alonso wasn’t a certain starter. Fast forward a year though, and he fell out of a favour with Sarri which lead to Emerson Palmieri getting a run of games.

With Lampard at the helm, Alonso may return to the starting 11 – and if he does then he brings a record of attacking returns with him. He provided 8 assists last year as well as scoring twice. The season before that he scored an incredible 7 times. This was no fluke though, as he scored 6 the year before that.

He is £6.5m, and justifiably so, but doubts linger over his likelihood of starting which is why he is picked by less than 5% of managers.

Why Are Willian and Pedro Always Tempting?

The Chelsea Fantasy Premier League options don’t stop in defence as there is an abundance of midfielders vying for attention. At the top of this list is the familiar faces of Willian and Pedro Rodriguez.

They are both fantastic players but each have flaws. Willian’s consistency doesn’t match his talent and Pedro can’t seem to nail down a starting place. Furthermore, they are both the wrong side of 30. As they are both £7.0m there are arguably better options elsewhere.

Barkley or Even Mount?

Both Ross Barkley and Mason Mount are likely to have advanced roles in the Chelsea side and are both a relatively cheap £6.0m.

The former is a proven asset in the Premier League, with his goals and assists combining to more than 30 between 2015 and 2017. On the other hand, this is Mount’s first taste of the Premier League. He does look ready though, after having a great season in the Championship with Derby (9 goals, 4 assists) and is already looking ready for Chelsea with impressive performances in pre-season.

Both could be good choices but more information is needed as to their likelihoods of starting before a confident decision can be made.

After singing for £58 million from Dortmund, it is hard to see Christian Pulisic not going straight into the starting lineup for Chelsea.

There is no doubting his ability but he did only score four and assist four in a free scoring Dortmund side last season – these came across 20 appearances.

Bluntly put it’s probably best to avoid the Chelsea forwards until their starting hierarchy becomes clearer. Olivier Giroud, Tammy Abraham and Michy Batshuayi each cost £7.0m which, while reasonable, is a lot of money to invest on a forward that isn’t starting.

Any of them could, and probably will, end the season with good returns – the question is figuring out who.

Tammy Abraham is probably looking most likely right now and is notably on penalties.

What is Chelsea’s Starting 11?

If FPL managers knew the answer to that, picking their players would be easy. We will share our predicted Chelsea lineup before the big Premier League kick off on Fantasy Premier League Team News page.

This will also say the percentage likelihood of each player starting.