Here we will look at how they performed lasts season, check the difficulty of their fixtures to begin the season and look at their best Fantasy Premier League prospects.

The Eagles finished 12th last season, an area of the table they have been familiar with in their six seasons since returning to England’s top division.

Palace’s home and away record is somewhat of an anomaly in comparison to other clubs. They were the only team last season to accrue more points away than at home. Not only that, it wasn’t even close!

Their home games only averaged just over two goals a game and Palace themselves averaged just one. Conversely, their away games were far more open affairs, averaging more than three.

It remains to be seen whether this will continue into the 2019/20 Premier League season but Burnley have done similar in the past and it didn’t carry over.

Overall the Glaziers have a good start to the season. An opener at home to Everton followed by a trip to newly promoted Sheffield United can’t be moaned at.

Away fixtures to Man Utd and Tottenham in Gameweek 3 and 5 respectively is obviously not great but a home fixture against Aston Villa is sandwiched in between. Back to back home fixtures against Wolves and Norwich follow. 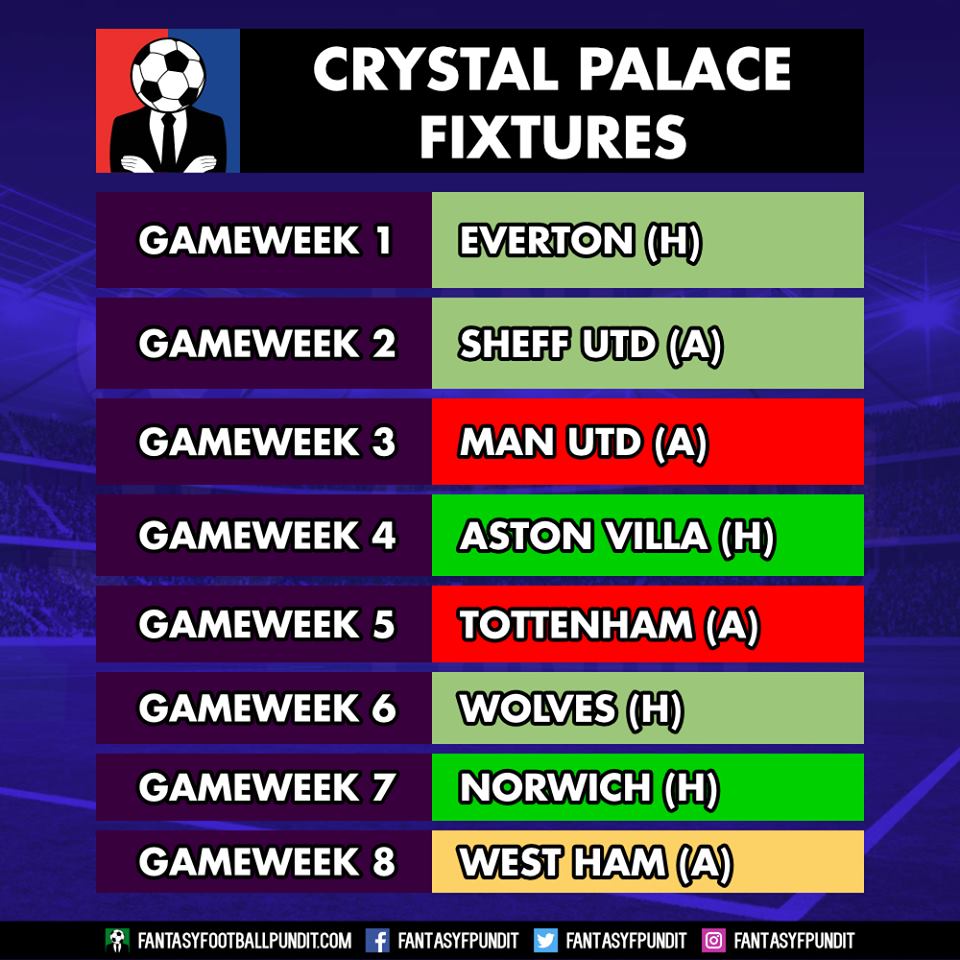 Crystal Palace don’t have an abundance of options but there are three or four players that are worthy of note.

When it comes to points, van Aanholt is the pick that stands out, at least among the Palace defence. He was their best value player last season following 12 clean sheets which came in spite of their poor home form.

Patrick van Aanholt scored three and assisted twice, which was actually his lowest combined total since 2014/15. He is a defender that clearly offers attacking threat but does come with a relatively steep £5.5m price tag.

Following Aaron Wan Bissaka’s transfer to Man Utd, FPL managers believe Martin Kelly will find a place in the starting 11. This could be at right back or at centre back too, as the likes of James Tompkins and Mamadou Sakho are carrying injuries.

Part of his popularity is due to his £4.0m price tag which tends to be reserved for players a lot less likely to start. Providing he does start, he is an excellent option at the budget price. Don’t expect any attacking returns though, as he hasn’t scored or assisted in either of the least two seasons.

After scoring 10 goals in 2017/18, Luka Milivojevic was wrote off as being lucky. However, after 12 goals in 2018/19, he was once again Palace’s top scorer for the season as well as getting the most Fantasy Premier League points.

He is priced at £7.0m but managers should be acutely aware that 10 his goals came via penalties. This means he is unlikely to replicate the 166 points he scored last season.

Zaha has been at the forefront of transfer speculation all summer and it shows no signs of dying down before the Premier League starts. Even so, at £7.0m, there is plenty of interest in the Ivorian.

He scored 143 points last season but a position change to midfield means he would have actually scored 165 points (excluding bonus point changes).

Additionally, his 10 league goals last season were his best returns to date. The same can be said for his 11 assists. With these stellar stats behind him, he can be considered unlucky to only 13 bonus points last season.

How will Crystal Palace Lineup?

Crystal Palace’s starting 11 prediction will be featured on our Fantasy Premier League Team News page very soon. Alongside their starting 11 will be their formation as well the percentage chance of each player starting.