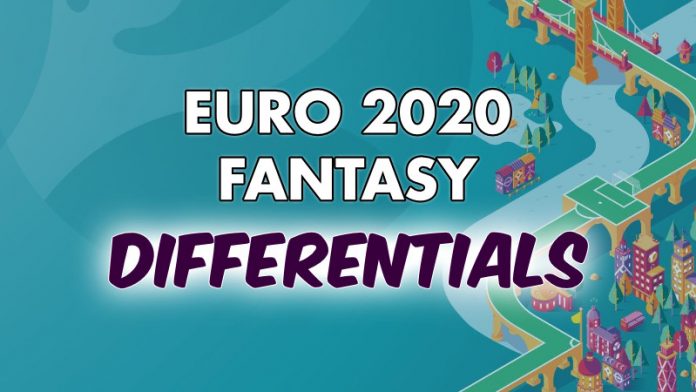 Sometimes Fantasy Football is all about marginal gains. Here’s some differential players in the EURO 2020 fantasy game you can include to get ahead of the competition.

With so many managers clamouring over Harry Kane and Romelu Lukaku in the EURO fantasy game, you can get ahead of the competition by including a couple of these differential picks. Here are five worth considering.

The Frenchman (€10m) had an outstanding season, scoring 29 goals and providing 9 assists in all competitions, averaging a return every 90 minutes. With the France squad packed full of world-class talent he’s the poacher they need, averaging 3.79 shots per 90.

This call-up is his first inclusion in the national squad since 2015 and has since scored against Wales in their recent friendly. With just 10% ownership, Benzema could be a fantastic premium option.

Dzyuba’s (€8.5m) talents aren’t well known outside of Russia, but he knows where the net is. He scored eight and assisted four goals in qualifying, with 1.53 returns per 90.

At 6 foot 6, the top scorer in the Russia (20 goals) is an aerial threat and will tower over most defenders this summer. With the quality of opposition being at question, he is still scoring goals.

Owned by just 1% of players, the Russian could be a good pick against Denmark and Finland, games in which Russia will be looking for three points.

On first thought, many players are put off by his low number of attacking returns last season, just three. However, the midfielder plays in a more advanced role for his country, scoring 12 in his last 18 matches.

Playing all their group matches at home, the Dutch are favourites in Group C so he may fancy his chances of getting on the scoresheet again.

He’s a guaranteed starter (€8m) owned by just 7%, therefore making him one to look out for. Altogether, a player of his quality could cause problems for the likes of North Macedonia.

Following a solid season for Leipzig, scoring 5 plus 9 assists, the Spaniard is likely to start for Spain this summer. Playing mainly out wide for Spain, he’s scored in his last two matches.

That’s just a glimpse of his goal threat, taking 77 shots in the Bundesliga, more than any other teammate, and 3.16 per 90. He’s also a playmaker, providing 54 passes into the penalty area, 104 shot-creating actions and 0.78 goal-creating actions per 90.

At this time his ownership is 2%, making him a great differential for a team tipped to top their group. He will set you back €7m.

If there’s one thing fantasy players love, it’s an out of position player. Despite being a defender in game, he plays in midfield for Ukraine, meaning potential for both clean sheet and attacking points.

He brings a winning influence to the team too, averaging 2.3 points per match for City last season.

His ownership is just 8%, so could be worth a gamble as his points potential is huge. Zinchenko costs €5.5m.

According to our EURO 2020 Matchday 1 Cheat Sheet, Denmark are the team second most likely to pick up a victory in the opening round of fixtures. That means the Danes are currently being overlooked by many EURO managers.

Eriksen is at the forefront of the Danish attack which means he is the obvious choice. The fact he takes free kicks and penalties only adds further justification to his consideration.

He may cost a relatively steep €9m but this is great value if you’re intending to use one of your Wildcard chips in Matchday 2. He is currently picked by just 5%.

Sasa Kalajdzic may be unknown to a lot of managers having only played one season in the Bundesliga but he should be on your radar.

The forward costs €7.5m and is selected by a mere 1%. The biggest plus for the 23 year old is Austria’s MD1 fixture against North Macedonia, which on paper is the easiest in the competition.

It is his form that makes him really tempting, though. He’s scored 3 in the last 4 for Austria and is coming off an excellent season for VfB Stuttgart 16 league goals in 33 appearances.

Much like Eriksen, he’s a player to consider more if you’re using a chip in MD2. Austria come up against Holland following North Macedonia, which is obviously a much more daunting fixture.