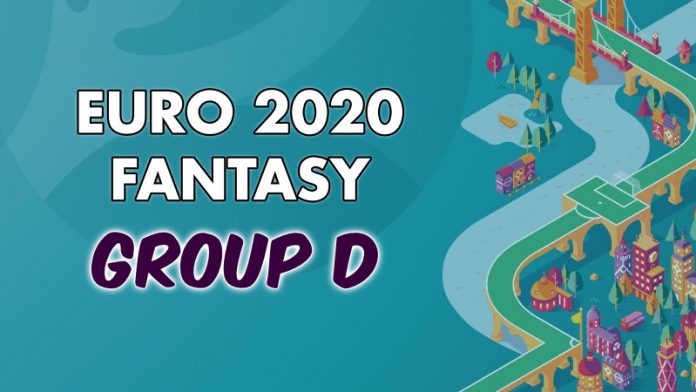 To qualify from Group D

England’s players are among the more picked for the EURO 2020 fantasy game. Whether this is due to the Premier League or the fact they’re second favorites for the tournament is up for debate.

Naturally he comes at a premium price of €11.5m, equal to Robert Lewandowski. Only Cristiano Ronaldo and Kylian Mbappe cost more (€12m).

Kane’s high pick percentage seems justifiable following yet another excellent season where he was the second highest scorer in FPL. He was credited with 23 goals and 14 assists in the Premier League fantasy game.

Furthermore, he is favorite to win the EURO 2020 Golden Boot. Interestingly, Romelu Lukaku at €11m is second.

Other appealing English options include Phil Foden (€8m) and Mason Mount (€7m) who are both listed as midfielders. Of the attacking midfield options Gareth Southgate has available, these two appear to be the most likely starters.

Mount is proving to be a very popular pick at 32% while Foden has been picked by only 14%, perhaps surprisingly.

That leaves the likes of Jadon Sancho, Marcus Rashford and Raheem Sterling as far too risky for their price to select.

Who will start in defence for England?

At the back it is Harry Maguire who looks to be the safest pick. Providing he is fit, at €5.5m he is a reasonable route for a certain starter in the England team. The same can be said for John Stones (€5.5m) but with slightly less confidence.

Meanwhile, England’s full back starters are far from certain. The right back situation has been talked about a lot on Social Media over the last week, although Trent Alexander-Arnold has now withdrawn from EURO 2020 with an injury.

That leaves Kyle Walker (€5.5m), Reece James (€5m) and Kieran Trippier (€5m) to battle it out. We would expect Walker to get the nod. He also has the bonus of being to play centre back should Southgate opt to play him there.

On the other side it appears to be a 50/50 battle between Ben Chilwell and Luke Shaw who are both €6m. Shaw is picked by a fairly staggering 18% of managers.

Luka Modric is Croatia’s most selected player but that is only by 4% of EURO managers. He is on the pricey side €8.5m and given his goalscoring record we’d avoid him. Unlike at Real Madrid though, he does take penalties for the Croatian national team.

Some managers are putting their faith in forward Ante Rebic (€7m) but he hasn’t started any of Croatia’s last 8 matches. As such he is another player to avoid.

One differential option is Andrej Kramaric (€6.5m). There are questions marks over his starting place but it appears he is more likely to get the nod than Rebic.

His domestic form has been superb this season, scoring 20 Bundesliga goals in 28 appearances for Hoffenheim. The question will be, aside from starting, whether he can translate those goals to the international stage. He has scored 14 in 53 Croatia appearances in his career so far.

Despite being second favorites for Group D they don’t offer much in the way of appealing EURO 2020 fantasy options.

There are three players to consider from the Czech Republic side – Tomas Soucek (€6.5m), Tomas Holes (€4.5m) and Vladimir Coufal (€5m).

Fantasy Premier League managers will be very aware of what Soucek and Coufal bring to the table. Soucek provided an impressive 10 goals and 2 assists, all while playing in defensive midfield. He plays there for Czech Republic too but can start slightly further forward, evidenced by his 7 international goals in 33 appearances.

Coufal meanwhile, contributed 9 assists to West Ham’s, leading to an excellent debut Premier League season. This doesn’t always translate to the international stage but he is certainly a player to consider.

Finally, Holes only has two caps for the Czechs. These did come in their last two matches, however.

Any starting player at €4.5m will open eyes. The fact he plays for a competitive Czech team and is capable of finding the back of the net (6 league goals and one international goal this season) only adds to his appeal.

Bluntly put there aren’t too many Scottish options for EURO 2020 fantasy. They obviously have some good players but due to their likelihood of winning and the prices of these players they’re a team to skip over.

Andrew Robertson is selected by 16% and will set you back €5.5m. His popularity is undoubtedly due to his performances in a Liverpool shirt, something which he has not been able to replicate for Scotland.

Another option is John McGinn but at €7.5m he is far too expensive to even consider. The same can be said for the more defensively minded Scott McTominay at €6m.