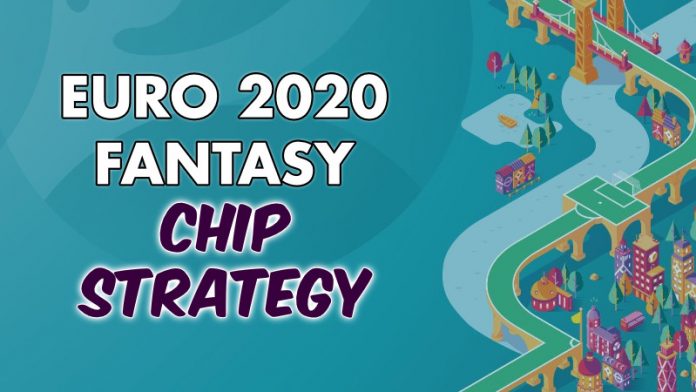 If you still haven’t used either chip then now (MD3) is the time to do so. Which one you use depends on your own preference.

As there is an automatic unlimited transfers ahead of MD4, you don’t need to worry about preparation beyond MD3. This means you can choose whichever would benefit solely MD3 more.

So, essentially the choice comes between being able to pick absolutely anyone you want for the final group stage games (minus number of players from each team and formation constraints) and not worrying about predicting which teams progress to the latter stages and vice-versa.

You should almost certainly use one of them though, unless your team is how you want it to be anyway. In terms of MD3 lineups we expect the teams to remain fairly consistent throughout with the exceptions of:

A description of what exactly each chip does and pre-tournament chip strategy can be found below.

There are two chips to use in the EURO 2020 fantasy game – the Wildcard and Limitless. Given there are only seven Matchdays in EURO fantasy using these at the optimum time takes on even more importance.

Much like in the traditional Fantasy Premier League game, a Wildcard allows you to make as many transfers as you want without taking a points penalty. Any players you transfer in will stay in your team once that Matchday is complete.

The Limitless Wildcard once again allows you to make as many transfers as you want without penalty but those transfers will apply only for that Matchday. This means your team will revert back to what it was prior to the Limitless.

In addition, the Limitless Wildcard allows you to make changes without any budget restrictions. So, you pick any squad you want, subject to eligible formations and the players from each team limit.

Who’s got their #EUROFantasy chip strategy already planned out? 🤓

Or are you seeing how MD1 plays out?

Now that we know what the EURO 2020 fantasy chips do, let’s take a look at the best way to use them.

Before we do that though, it’s important to note that you don’t have to stick to your chosen strategy. For example, if you plan to use either chip in MD2 and then MD2 comes around and you think you don’t need to, don’t!

It seems most EURO 2020 fantasy managers, at least the vocal ones, are intending to use their Limitless chip MD2. This is something we’re also planning to do.

There are primarily two reasons for this. Firstly, and most importantly, it allows you to take advantage in the ‘easier’ fixtures.

During the EURO 2020 group stages there are plenty of fixtures that will have firm favorites in. That means you can identify them and really try to take advantage with that unlimited budget.

Secondly, it allows you to focus on MD1 without having to worry about MD2. So, instead of making compromises to appease both sets of fixtures you can maximize the opportunities in both.

The other school of thought on the Limitless Wildcard chip is to use it before the quarter or semi-finals. This is because, presumably, there will be the top team remaining which means more expensive players.

As a result, having the Limitless available means you can pick the best those teams have to offer, rather than having to choose between their best players.

The downside to this though, is a lot of teams will share the same players so it won’t allow to climb the leaderboards perhaps as you’d wish.

When you use your traditional Wildcard may depend on when you plan on using the Limitless. Let’s assume you are using the latter in MD2 though.

It would then make sense to refresh your squad entirely in MD3. The first two Matchdays will reveal a lot of information about team lineups and form. Consequently, MD3 is seemingly a great time to use it.

It also means you can prepare for each of the group stage Matchdays as individual events.

Furthermore, there are more free transfers available as the tournament progresses. So, theoretically, you get more use out those chips using them earlier on.

Wildcard in Quarters or Beyond

Some will argue the Wildcard should be used later on. The logic behind this strategy is to use the Limitless in MD3 to react to potential lineup rotation. Teams should be relatively static during the first two games.

The extent to which lineups will rotate in MD3 is somewhat speculative which makes this particular plan a little more risky.

However, due to the increased free transfers and teams looking more alike, this is a stance we disagree with.

There is no definitive right or wrong way to use your chips but it would be very difficult to argue to not use at least one of them before MD2 or MD3.