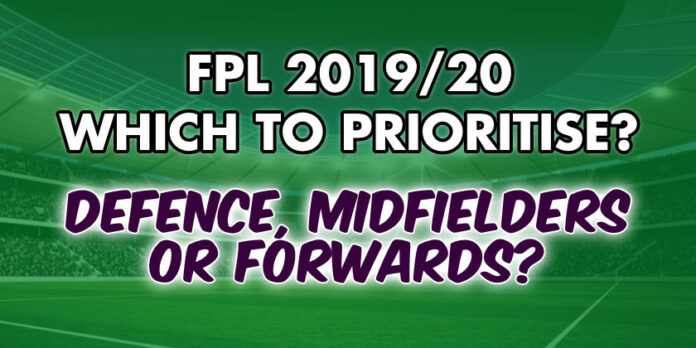 There has been a lot of discussion among FPL managers as to which of the defence, midfield and forwards should be prioritised in this season’s Fantasy Premier League.

Traditionally the further forward players have garnered the most points but there is a growing trend towards defenders being the most valuable players. This has even resulted in some FPL managers discussing the idea of having budget forwards across the board. We analyse the evidence to see whether there is any legitimacy behind it.

Looking at the top points scorers and their positions from last season is a basic way to analyse position importance. However, it does make for some interesting reading and does show how varied the positions can be for the players with the absolute best returns.

Given that attacking players cost more this list is certainly interesting.

When looking at the top 20 players by position in terms of points per £m though, the list makes for much different reading. Goalkeepers have been removed this list.

The points per £m metric will favour defenders to some degree as they are significantly cheaper than their midfield and forward counterparts. However, the degree to which they do is noteworthy.

It is also worth noting that the following 10 players on the list are made up of two defenders, six midfielders and two forwards. In contrast to this though, the top 10 are all defenders.

Of this top 10, all of them are premium defenders with only one (Patrick van Aanholt) costing less than £6.0m. This certainly provides credence to the argument that premium defenders should be prioritised within your team. It also shows the importance of picking well.

No wonder Van Dijk is currently the most picked player.#FPL pic.twitter.com/l4TQCLjvzC

Points per £m across positions

The points per £m metric shows more interesting information when the average points per £m is calculated among the top 20 performers in each position.

So, of the top 20 point scorers in each position, their average points per £m was as follows:

These results are equalised somewhat when you take into account all players from each position. Nonetheless, it only provides further evidence that defenders are becoming increasingly vital in FPL.

Maybe last season with the likes of Andrew Robertson, Trent Alexander-Arnold and Virgil Van Dijk was a one off though…