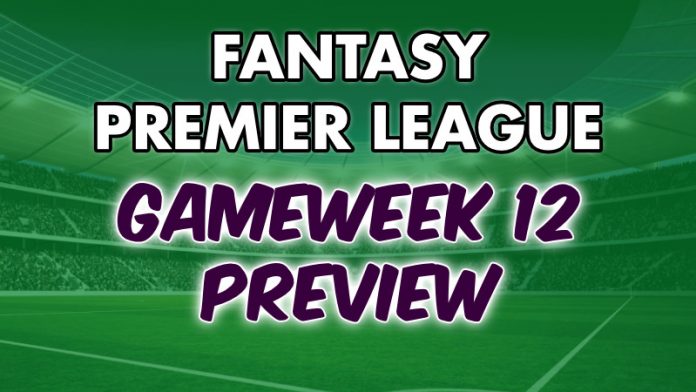 Heading into Gameweek 12, we’re coming off the highest Fantasy Premier League point average of the season with 62. As we go deeper into the season, it’s those premium priced FPL players who are now showing their worth every week.

We saw Tottenham’s Harry Kane and Son Heung-Min edge closer to the record for most collaborated goals in the Premier League. Mo Salah and Jamie Vardy picked up their ninth goals of the season and Kevin De Bruyne showed us why he won the PFA Player of the Year last season.

The question now is which of these premium Fantasy Football assets to pick. To help these tough decisions, we look at each Premier League teams’ percentage chance of winning, the most likely goalscorers and some differential choices.

Leeds United fell to 13th place in the Premier League last week after their 3-1 defeat against Chelsea. Although he was on the losing side, striker Patrick Bamford picked up his eighth Premier League goal of the season. It’s worth noting that seven of his league goals have been in away fixtures and the next two games for Leeds will be at Elland Road.

It will be West Ham United who take on Leeds at Elland Road in Gameweek 12. The Hammers were left disappointed after letting their first half lead slip, to lose 3-1 to Manchester United. Tomas Soucek headed in West Ham’s goal and this was the midfielders second goal in the last four games. Priced at just £4.9m, the midfielder could add to his tally this week as he plays a team who are quite poor in the air.

Wolverhampton Wanderers appeared to fall apart against Liverpool last week as they missed injured striker, Raul Jimenez, and defensive mistakes resulted in a 4-0 defeat. Unfortunately, Jimenez is not expected back any time soon so Wolves will be looking for other forward players to step up.

Aston Villa return after a week out following a match postponement and will face Wolves in a local derby. Jack Grealish is the man in form for the Villains as he has picked up two goals and three assists in his last four games. The Villa captain has been outstanding so far this season and he will be looking forward to getting at Wolves’ unstable looking defence.

The other side returning from a week out is Newcastle United after their match was postponed last week. The Magpie’s striker, Callum Wilson, has hit the ground running since his summer transfer from Bournemouth. Scoring seven goals and getting three assists. Wilson is averaging 7.4 Fantasy Premier League points per game. This is the joint second highest for strikers, with only Kane averaging more.

West Bromwich Albion now have the Premier League’s worst defensive record so far, after a crushing 5-1 loss against Crystal Palace. Albion did go down to ten men when the game was tied at 1-1 and had only conceded five in their previous five matches. The Baggies will, however, be missing key player, Matheus Pereira, this week as a result of the red card.

The Manchester derby awaits us in Gameweek 12, and it is very tough to predict how the game will go down. Manchester City seem to have found their rhythm and Manchester United will be hoping to prove a point, following their midweek Champions League early-exit. On the other hand, United have only won one Premier League game at home this season and City have only won two away.

The Red Devils come into the game following another away comeback win, this time at West Ham. Bruno Fernandes picked up his fifth assist of the season, which made it four goals and three assists in United’s last three Premier League games. City also won last week, as they strolled to a 2-0 home win against Fulham. Playmaker, Kevin De Bruyne, put on another fantastic display to pick up his second goal and sixth assist of the season.

Head to Head, United come out slightly on top as they have won three out of the last five Manchester derbies, with City winning the other two.

It’s now just one victory in the last seven Premier League matches for Everton after they drew 1-1 with bottom three side, Burnley. Although The Toffees have lost that exciting and clinical form which they opened the season with, Dominic Calvert-Lewin continued his pursuit for the golden boot. His goal against Burnley took the striker to 11 goals in as many games.

Chelsea came from behind to win their home match with Leeds United, 3-1 last week. Olivier Giroud marked his first league start of the season with a goal, after his four goals in their Champions League match. If the French striker continues his fine form in a free-scoring Chelsea side, he could be an absolute FPL bargain at £6.7m.

Southampton welcomed back their star striker, Danny Ings, from injury last week and he marked his return with the winning goal in their 2-1 victory over Brighton. This was the striker’s sixth goal out of his eight appearances this season and he will be keen to make up for lost time against bottom of the league, Sheffield United, in Gameweek 12.

Sheffield United still only have one point this season after losing their sixth game in a row, this time against Leicester City. Chris Wilder’s side have just five goals so far in the worst start to a Premier League season ever.

After missing Wilf Zaha for two games, which resulted in two defeats and zero goals, Crystal Palace fans were over the moon to see his return. The forward picked up the highest point total of any player last week in their 5-1 victory over West Brom. Two goals, one assist and three bonus points helped him up to 18 points. That’s now four goals and three assists in Zaha’s last five appearances.

Top of the league, Tottenham Hotspur, will take on Palace in Gameweek 12 after they walked over North London rivals, Arsenal, in their 2-0 win. It was that dynamic-duo of Harry Kane and Son Heung-Min who both scored and assisted each other, to win the game. Son sits top of the charts for FPL points so far this season, with Kane in second.

Liverpool thumped Wolves in their last game and the 4-0 win took them level on points with top of the league Tottenham, with just goal difference between them. A goal and an assist for forward Mo Salah, took him to nine goals and three assists for the season. The Egyptian King is now averaging 8.7 points per game. There is a slight worry that Salah will be rested in Gameweek 12, ahead of the huge fixture against Tottenham three days later.

Fulham host Liverpool this week after their 2-0 defeat to Manchester City. Despite their position in the table, Fulham’s performances have improved in recent weeks. New centre back, Joachim Andersen, has helped reduce the number of chances they are allowing their opponents. Facing the league’s highest scoring team, in Gameweek 12, will be his biggest challenge so far.

Arsenal made it just one win in seven Premier League games, with a painful defeat at the hands of arch-rivals, Tottenham. Finding the back of the net is their problem this season as they have scored just ten goals so far. They will be hoping to turn a corner in Gameweek 12, as they face bottom three side, Burnley.

Burnley picked up a point in their 1-1 draw last week against Everton. The Clarets’ shot-stopper, Nick Pope, returned to the side and put on an outstanding display. The Goalkeeper made five key saves in help earn the point and Burnley are looking stronger at the back, every game.

Leicester City left it late to defeat Sheffield United last time round, thanks to a 90th minute Jamie Vardy winner. The Foxes’ striker picked up his ninth goal of the campaign and is averaging 7.4 points per game. The caveat is only one of his goals has come at the King Power Stadium, which is where their Gameweek 12 match will be played.

Brighton head to Leicester this week after a home loss to Southampton last week made it just one win in nine for Graham Potter’s men. The Seagulls do, however, have a player flying under the FPL radar in Pascal Gross. His penalty against Southampton made it two goals and two assists in the last five games. In this time, Gross has the sixth best form of any player FPL player, which is very good for a £5.8m Midfielder.