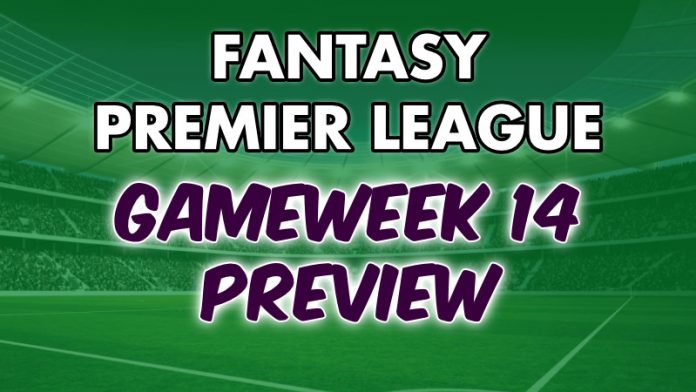 As always in December, there are very small breaks between rounds of Fantasy Premier League matches and Gameweek 14 is already upon us. It’s very important to keep an eye on the Gameweek deadlines every week, especially during the Christmas period.

We go into Gameweek 14 after a mouth-watering top of the table clash ended with Liverpool doing what all good champions do, by finding a way to win with very little time left. There was also plenty of movement in a very close top half of the Premier League.

As always, we look at each Premier League teams’ percentage chance of winning, the most likely goalscorers and any differential options worth taking a punt on.

Liverpool came out victorious in their high-quality top two clash with Tottenham Hotspur, thanks to a 90thminute winner from Roberto Firmino. Mo Salah picked up their other goal in the 2-1 win that saw The Reds go top of the league. This was Salah’s 11th league goal of the season and his third game in a row where he’s been on the scoresheet. Once again, the Egyptian Forward is proving that he is pure Fantasy Premier League gold.

Crystal Palace will be Liverpool’s opponents at the weekend after scraping a 1-1 draw at West Ham, midweek. Christian Benteke scored his third goal in three games but just when his form seemed to be improving, he picked up his second yellow of the game and was dismissed. On top of this, Palace have lost all of their previous five matches with Liverpool with forwards Sadio Mane and Mo Salah scoring nine goals between them.

Southampton picked up a point away at Arsenal and they will feel like they should have come away with more after The Gunners went down to ten men. Theo Walcott marked his return to the Emirates with a goal and Che Adams picked up the assist. For Adams, this made it two goals and two assists in his previous six games.

The Citizens meanwhile dropped points once again, but this time was a shock result as they drew 1-1 with bottom three side, West Brom. Scoring goals appears to be a major issue for City as they have the fewest goals scored in the top half of the table. In their game against The Baggies, they took 26 shots but only managed seven on target. Striker, Sergio Aguero, will be a sight for sore City eyes, if he returns from injury this week.

Gameweek 13 brought another good win for Everton over a fellow team hopeful of a European place in Leicester City. Dominic Calvert-Lewin’s point total continued to tick along as he provided an assist in the game. However, it was defender Mason Holgate who grabbed the most points in the 2-0 win. Since his return to the starting 11, Holgate has had back to back clean sheets and added a goal against Leicester. At £4.8m, he could be worth keeping tabs on.

Arsenal are now six Premier Leagues without a win. They drew 1-1 with Southampton and it looked like it would be the best result possible after centre-back, Gabriel, picked up his second yellow. Pierre-Emerick Aubameyang scored his third goal of the season after firing blanks in the previous five league matches.

Newcastle’s defensive injuries showed in their last match as they lost 5-2 against Leeds United. Captain, Jamaal Lascelles, has just a 25% chance of playing in their Gameweek 14 fixture. One the bright side for Newcastle, their Scottish winger, Ryan Fraser, returned from absence and picked up his third assist in just three starts of the season.

In Gameweek 14, Newcastle will face Fulham who continued their steady improvement with a goalless draw against Brighton midweek. This was a well-earned point for The Cottagers as they continued to show some defensive stability with Joachim Andersen marshalling the back line. The Danish Centre Back picked up two bonus points as well as the clean sheet.

Brighton felt like they missed a good opportunity for a win as they drew 0-0 with Fulham. This kept them within reach for the bottom three teams and made it just one win from the last 11 games. Goalkeeper, Robert Sanchez, filled in for absent Mat Ryan and impressed as he picked up a clean sheet and two bonus points.

Sheffield United continued their appalling start to the season by losing, from a winning position, to Man United. They find themselves nine points from safety and with just one point to their name. The January transfer window can’t come fast enough for Chris Wilder if he is going to bring in some reinforcements to lead their battle for survival.

In the last Gameweek, we saw the top two go head to head as Tottenham took on Liverpool at Anfield. A 90th minute winner against Tottenham saw them drop all points after their hard work on Wednesday night. One thing that was confirmed for us FPL managers is that Son Heung-Min is currently fixture proof. After previously scoring against Man City and now Liverpool, the South Korean forward moved up to 11 goals in the league.

Tottenham hope to get back on track in Gameweek 14 and will host Leicester City. The Foxes’ inconsistent form continued as they lost 2-0 to Everton at The King Power Stadium. Striker Jamie Vardy remains on an impressive 10 league goals having failed to find the net against Everton. The Leicester talisman appears to thrive in away fixtures though, as he has scored eight goals from their six games on the road this season.

Once again, Manchester United picked up three points on the road after coming back from a losing position. Defensive and goalkeeping mistakes have cost United plenty of goals this season but fortunately their attack have got them out of it. Marcus Rashford and Anthony Martial lead the attack fantastically for United. Rashford picked up two goals and Martial provided a goal and an assist. To the dismay of many FPL managers Bruno Fernandes blanked.

Gameweek 14 reunites an old rivalry, which we haven’t seen for many years, as Man United take on Leeds United. The away side are coming into the game after a seven-goal thriller against Newcastle saw them win 5-2. Striker, Patrick Bamford, was back on the scoresheet in their home fixture this week but it’s his away form which catches the eye. Bamford has scored seven goals in six away games so far.

West Bromwich Albion fans were delighted to pick up an unexpected point against Premier League giants, Manchester City. However, for the West Brom board it seems it was too little, too late as they sacked the manager, Slaven Bilic and appointed Premier League veteran, Sam Allardyce, in his place. The Baggies have a good goalkeeper in Sam Johnstone, and he made some top saves to earn a point against Man City. With Allardyce’s defensive know-how, Johnstone could start to see some clean sheets coming his way.

It will be a Birmingham derby in Gameweek 14 as West Brom face Aston Villa at home. The visitors are coming off an entertaining goalless draw against Burnley, where they were disappointed not to come away with more. It was, however, back to back clean sheets for the Villa defence and they will be hoping for a third in a row this week against second from bottom, West Brom.

Burnley scrapped their way to a 0-0 draw away at Aston Villa midweek. Nick Pope continued to make his claim for the England number 1 shirt as he made six saves to earn his fifth clean sheet of the season. He is now the highest scoring goalkeeper in FPL this season.

Gameweek 14 sees Burnley host Wolves and their visitors are coming off a great 2-1 win against Chelsea. It was Daniel Podence and Pedro Neto who produced the goals in the absence of injured striker, Raul Jimenez. The Portuguese midfielders look like they’ll be Wolves’ main goal threats going forward, as they have recorded five goals and one assist between them in the last five games.

A 95th minute goal against Chelsea made it back to back defeats for The Blues and brought doubts around their chances of challenging for the title. A silver lining for Chelsea was Olivier Giroud firing home his second goal in the last three games. At just £6.7m, the French striker could be a great differential option if Chelsea can find their free-scoring form again.

It’s another London rivalry for West Ham United this week, as they come up against Chelsea. West Ham’s 1-1 draw with Palace will have disappointed their fans, after playing 20 minutes of the game against ten men following a red card. Sebastien Haller, who continued to fill in for injured Michail Antonio, scored his third goal of the season with a fine finish. He is likely to keep his place this week as The Hammers will not want to rush back Antonio again.