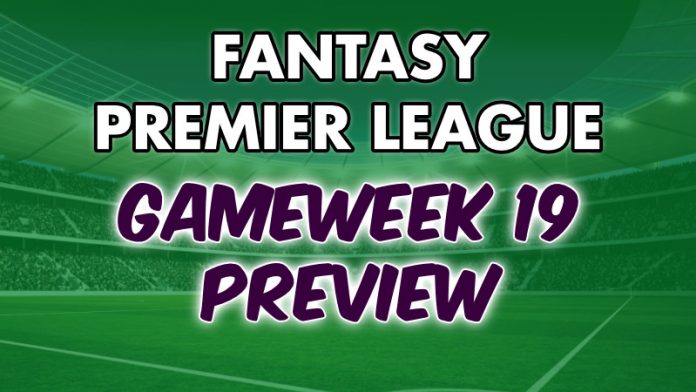 Just as Fantasy Premier League managers navigated their way through a Blank Gameweek, containing just six fixtures, we’re now faced with a huge Double Gameweek. As it stands, 12 of the 20 Premier League teams will be playing twice in Gameweek 19.

The Bench Boost and Triple Captain chips are sure to be popular this week. However, it’s very important to find the right players to make the most of these one-off chips.

To help the tough transfer dilemmas, we look at each Premier League teams’ percentage chance of winning, the most likely goalscorers and which defenders to target for those clean sheets.

Wolverhampton Wanderers continued their poor fun of form as they lost 2-1 to Everton. They now have just one win from their last eight Premier League games. Midfielder, Ruben Neves, netted his second goal in consecutive weeks. At £5.2m, he could be worth keeping an eye on especially if he stays on penalty duty.

In Gameweek 19, Wolves will be play West Brom at home. The task of keeping The Baggies in the Premier League looks to be a bigger task than new manager, Sam Allardyce, would have expected. They have conceded 13 goals in the four games Allardyce has been in charge and picked up just one point.

Leeds United were wasteful in their match with Tottenham and it resulted in a 3-0 defeat. They entertained as always and registered 18 shots, with their opponents taking 20. This time, Leeds face a much leakier defence and it’s worth noting that Patrick Bamford has ignited his home form, by scoring in the last two at Elland Road.

It will be Brighton who head to Elland Road this week and they are coming off a 1-0 defeat to Man City. Brighton once again struggled to look dangerous in attack and only managed one shot on target in the game. The Seagulls haven’t won a league game in the last nine attempts.

West Ham picked up a great 1-0 away win at Everton in the last Gameweek as the sides had been evenly matched throughout the game before a late winner. Fan favourite, Tomas Soucek, picked up his fifth goal of the Premier League season. The £5.2m Midfielder is currently averaging 5.6 points per game. Solid value for money.

Burnley battled against Manchester United last week but ultimately, came up short as they lost 1-0. Goalkeeper, Nick Pope, made six saved in the game and with performances like that, The Clarets should expect more Clean Sheets going forward. In Gameweek 19, they face West Ham.

Fulham salvaged a point against Tottenham midweek as they came back from being 1-0 down, to draw 1-1. Ivan Cavaleiro scored the goal for The Cottagers and the £5.3m FPL midfielder continued to keep his place as a starting striker. The result made it five Premier League draws in a row for Fulham.

Chelsea take on Fulham this week and need a bounce-back performance as they slip further from the European spots. Chelsea are without a win in three Premier League games after Man City beat them 3-1. The Blues solid defence is out of form as they have conceded seven in the last three games. Prior to that, it took them ten games to concede as many.

Leicester City extended their unbeaten run to four with a 2-1 win over Newcastle United. James Maddison, put on a fine performance and picked up a goal in the process. If the £7.1m midfielder can stay fit, he could show the top FPL form we saw last season.

Southampton head to the King Power Stadium this week after providing the shock result from the last Gameweek. The Saints moved into sixth place in the league following a 1-0 win over the Champions, Liverpool. Jack Stephens made it three clean sheets in a row as he continued to fill in at centre back. The £4.6m defender has also picked up five bonus points from these three games.

Sheffield United picked up their first win of the Premier League season, at their 18th attempt. It was also their first clean sheet of the season as they beat Newcastle United 1-0. Although they still sit bottom of the league, we’ll see if they can build momentum from the victory.

Tottenham play bottom of the league in Gameweek 19 after they missed an opportunity to move into the top four midweek. Spurs let go of a 1-0 lead and had to settle for a point as they drew 1-1 with Fulham. One positive for Jose Mourinho’s side was their Striker, Harry Kane, headed home his 11th goal of the campaign. The England captain is now the second highest FPL point scorer so far behind teammate Heung Min Son.

Liverpool fans were disappointed once again as they lost 1-0 to Southampton in their last game. This made it three games without a win for The Reds and as a result, they have sacrificed the top spot.

It was Manchester United who moved above Liverpool and took pole position in the league. Their grinding 1-0 win against Burnley earned them the spot. Paul Pogba volleyed in the winner and this was a second attacking FPL return in a row for the £7.7m midfielder. With an ownership of just 1.4%, Pogba could make a great differential in the second half of the season.

Gameweek 19 brings us a mouth-watering fixture as rivals, Liverpool and Manchester United, lock horns at Anfield where the winner will be top of the league. Head to head, two of their last three games with each other have ended in a draw and Liverpool won the other.

Manchester City moved into the top four with their 1-0 win over Brighton midweek. This made it eight games unbeaten in the Premier League and six clean sheets during this run. £5.8m defender, Ruben Dias, seems to be vital to the defence and has started every game this season.

City will face Crystal Palace at The Etihad this week after their visitors ended Arsenals winning streak, with a goalless draw. It was a second clean sheet in a row for The Eagles. This week, however, they have just a 7% chance of managing a third.

Arsenal couldn’t break down a stubborn Crystal Palace midweek as the sides drew 0-0. This was a third Clean Sheet in a row for The Gunners, though. One to watch is £4.5m defender, Rob Holding, who has kept his place as centre back and could be a cheap way to benefit from their tighter looking defence.

West Ham’s second fixture of the Gameweek will be at home to West Brom. The two sides haven’t faced each other in the Premier League since the 2017/18 season and West Ham came out on top in their last meeting. The Baggies have the league’s worst defence so aiming for the West Ham attackers could be beneficial.

Leicester City host Chelsea for both sides’ double Gameweek fixture. Head to head, the sides have been evenly matched over their previous five encounters. They have both won one each and the other three ended in a draw.

Man City’s second match of Gameweek 19 will be against Aston Villa. With only three days between games, beware of the ‘Pep Roulette’ as City will be likely to rotate and rest players. The Citizens have won all five of their previous encounters and they scored 19 goals in the process. This is, however, a much-improved Villa team than what we’ve seen in recent years.

Aston Villa’s last game ended in a 2-1 defeat at the hands of Manchester United. The Villains put in another commendable performance and captain, Jack Grealish, picked up his ninth Premier League assist of the season.

Goalscorer: Odds not yet available but will be similar to the Aston Villa game

Manchester United will be licking their lips at their second fixture of Gameweek 19, as they take on Fulham at Craven Cottage. The last time Fulham were in the Premier League, The Red Devils put seven goals past them over the two games and conceded one in return.

Liverpool host Burnley in their second home game of the week. In terms of form, Liverpool have gathered just one more point than Burnley, in the last five Premier League games. Head to head, Liverpool have won four and drawn the other out of the last five. Sadio Mane and Roberto Firmino scored four goals each over these games.

Aston Villa’s second game this week will be against Newcastle United at home. Villa will see the game as a great opportunity to pick up three points. Especially as Newcastle’s form from the last five games sees them sat second from bottom.

Goalscorer: Odds not yet available