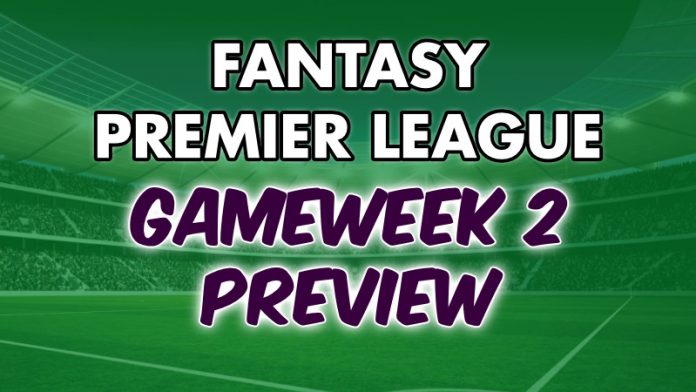 FPL Gameweek 2 is upon us! Whether GW1 went to plan or you’re tearing up your strategy, at least we got a first glimpse of newly promoted teams, new signings and how our Premier League teams are likely to set up going forward.

The attention turns to Manchester ahead of GW2, as a lot of FPL managers decide between United and City’s big hitters for their first transfer.

Every week we’ll be looking at the teams’ percentage chance of winning, picking out the most likely goalscorers and also any differential picks that may be worth a cheeky punt.

Everton were impressive in their opening fixture against Tottenham with new signing James Rodriguez leading the attack. He contributed five key passes and three shots.

They face newly promoted West Brom at home in Gameweek 2. The Baggies allowed 11 shots in their box against Leicester, leading to a 3-0 loss at home. Converting chances will be the biggest improvement Ancelotti’s men can make as they registered just four shots on target out of 15 against Tottenham.

Leeds took part in the most exciting opening GW1 fixture against the champions, Liverpool. Biesla’s men were clinical in attack as they capitalised on Liverpool’s defensive mistakes to score all three of their shots on target.

They face Fulham next, who, at times, were impressive against Arsenal. However, they were ultimately outclassed.

When the two teams met last season at Elland Road, Leeds claimed the three points with a 3-0 victory over Fulham. They have a 57% chance of taking the win again.

Football fans will be excited to see how Man Utd look in their opening Premier League fixture. The Red Devils exploded back into the PL season post-lockdown, going undefeated in nine and scoring 22 goals along the way.

The team, lead by Bruno Fernandes, began to look jaded towards the end of the season though, which may have contributed to their Europa League Semi-Final upset vs Sevilla. FPL managers will be expecting to see them back at their best, following a five week break.

They face Crystal Palace who picked up a great win in their opening fixture against Southampton. The Eagles were, and still are, dealing with an injury troubled defense, which Ole’s men will look to exploit.

The Gunners impressed against Fulham, with a convincing 3-0 victory. New signings, Willian and Gabriel both picked up points in GW1. Willian registered three assists and already looks to have settled in nicely at Arsenal.

They meet West Ham at home in Gameweek 2. The Hammers gave away 11 shots in the box in their opening match against Newcastle. Arsenal’s attack are likely to be more clinical than The Magpies, so West Ham will need to be in better form defensively if they are to get anything from the game.

Southampton host Tottenham in Gameweek 2. Both sides will be disappointed with their opening fixtures, as they both lost 1-0 and provided underwhelming performances.

Southampton’s Danny Ings and Tottenham’s Harry Kane will both be looking to provide the goals to get their teams off the mark. The strikers are they two most likely goalscorers for the fixture, with Danny Ings interestingly the most likely at 44%, followed by Harry Kane with 40%.

A great start for Steve Bruce’s team, with a good win away at West Ham. There were also goals for new signings Callum Wilson and Jeff Hendrick.

The Magpies registered 11 shot in the box against The Hammers and now they face a Brighton side who fell to a 3-1 defeat in their opening game against Chelsea. The odds suggest an even match between the two teams, with Clean Sheet odds marginally higher than the most likely goalscorer.

Chelsea take on Liverpool at Stamford Bridge in what is expected to be an exciting match. Chelsea are waiting on a few key players to return from injury.

New signing Timo Werner looked very sharp the 3-1 victory over Brighton, although he did fail to score. The match itself also revealed that the striker will not be taking penalties, perhaps dampening his Fantasy Premier League appeal slightly.

Liverpool showed more defensive mistakes against newly promoted Leeds in Gameweek 1. The jury is well and truly out on the Liverpool defence and the pacey Werner will be looking to exploit any weaknesses.

The Reds did, however, look dangerous going forward. Obviously Salah stole the headlines with his hat-trick as part of their 4-3 victory.

A convincing victory over West Brom saw Leicester show the form they showed at the beginning of the 2019/20 season, with Harvey Barnes putting in an impressive performance against the club he represented as a loanee. Barnes took five shots, all in the box, during the game and he will aim to improve his finishing in Gameweek 2.

He and Leicester come up against a solid Burnley defence. In terms of goals conceded they finished 9th in the Premier League last season.

When Leicester last hosted The Clarets, they battled to a 2-1 victory and the odds are suggesting a similar result.

Aston Villa begin their season in Gameweek 2 at home against Sheffield United. The Blades’ early defensive mistakes lead to a 2-0 loss against Wolves in Gameweek 1.

New goalkeeper, Aaron Ramsdale, had some good moments and some bad moments during the game. Ramsdale and his defense will be looking to bounce back and regain their stellar defensive reputation against Aston Villa.

The teams’ last meeting at Villa Park saw the game finish in a 0-0 stalemate. Villa’s new striker, Ollie Watkins will look to start his Premier League career with a bang, following his 25 league goals for Brentford last season.

Following a relatively disappointing season for Pep Guardiola and his team, Man City return in the second Gameweek to begin their title challenge. They face Wolves, who impressed against Sheffield United with two early goals and a subsequent solid defensive display.

The Citizen’s are bound to pose a stronger threat than that of Sheff Utd, though. Sergio Aguero is injured but obviously the Premier League favorites have a lot more attacking options than just him. The odds are unsurprisingly tipped towards a strong start for City.

The Fantasy Football Pundit captain for Gameweek 2, again is Pierre-Emerick Aubameyang. The odds state the Arsenal forward has the best chance of scoring among all players in Gameweek 2 (60%). On top of that, he also has a 29% chance of finding the net more than once.

Alternative options are Jamie Vardy (50% to score) and Bruno Fernandes (44% to score). Both are on penalties and although Fernandes has the huge potential to pick up assists, we may need to make sure the break has refreshed the jaded looking Utd team that closed the 2019/20 season before slapping the captain’s armband on him.