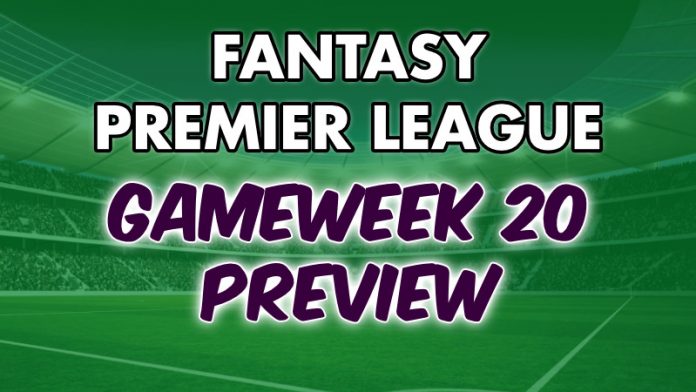 The first Double Gameweek of the Fantasy Premier League season is complete and plenty of managers will have returned triple digit point hauls.

The games, however, brought more changes in the top four as Liverpool fans were left disappointed and confused again, whilst Man City continued their clinical form.

As always, we look at each Premier League teams’ percentage chance of winning, the most likely goalscorers and which defenders to target for those clean sheets.

Crystal Palace suffered a 4-0 defeat at the hands of Manchester City last week. Another heavy defeat for The Eagles meant they’ve now conceded the third highest amount of goals in the Premier League this season. Only West Brom and Leeds have conceded more.

In Gameweek 20, Palace host fellow Londoners, West Ham. The Hammers are coming off back to back wins in the double Gameweek, which made it just one defeat in the last eight Premier League games. Michail Antonio returned to the starting line-up and scored a goal in both games. The striker picked up 18 FPL points including bonus points.

The double Gameweek made it zero wins in nine Premier League games for Newcastle, as they lost against Arsenal and Aston Villa. The Magpies sit bottom of the league in terms of form as they continue to struggle with player absentees.

Leeds will look to get back on track against Newcastle in Gameweek 20 after their 1-0 defeat to Brighton. Bielsa’s Leeds have burnt out in the second half of the season during his time in charge. It will be worth keeping an eye on their fatigue levels over the next few Gameweeks.

Southampton got beaten by Leicester last week to break their run of three clean sheets in a row. Striker, Danny Ings, appears to be in line to return in Gameweek 20 and will be aiming to add to his seven Premier League goals from 13 appearances.

Arsenal head to St. Mary’s midweek and they bring great form in the league with four wins and one draw in the last five. On top of the results, The Gunners currently have four clean sheets in a row. £4.5m defender, Rob Holding, is averaging 6.6 FPL points per game with just a 4.7% ownership.

West Brom finished the last Gameweek with one win and one loss as they continue their battle to get out of the bottom three. Playmaker, Matheus Pereira, scored three goals over the two games which earned him 24 FPL points. The Baggies face a bigger challenge this week as they host in-form Manchester City.

Manchester City continued their climb up the league table and are now four points ahead of Liverpool with a game in hand. Their defence picked up more points with back to back clean sheets. Defender, John Stones, scored a huge 27 points with two goals and two clean sheets. The centre back has the joint best form with his teammate, Ilkay Gundogan, who are both averaging 8.2 points per game. Gundogan has scored five goals in the last seven games.

Burnley fell to a 1-0 defeat in their match with West Ham however it was their second match of the Gameweek which grabbed the headlines. The Clarets provided the shock of the week as they put on an outstanding defensive display and pinched a goal late on to beat the champions, Liverpool, 1-0.

Aston Villa take on Burnley at Turf Moor in Gameweek 20. Villa ended the last Gameweek with one win and one loss. Captain, Jack Grealish, picked up his tenth assist of the season during the Gameweek.

It was one victory and one defeat for Chelsea in their double Gameweek. The 2-0 defeat to top four rivals, Leicester City, appeared to be the final nail in the coffin for manager, Frank Lampard. The Chelsea assets will be ones to keep an eye on over the next few weeks as we will see if another manager can unlock their potential.

In Gameweek 20, Wolves will play Chelsea and they take their poor run of form. The visitors lost 3-2 against West Brom to make it just one win from the last nine Premier League games. However, their last win in the league was against Chelsea. Centre back, Willy Boly picked up a goal and an assist on his return to action to score 12 points.

Brighton picked up a great away win against Leeds last week to break their run of nine Premier League games without one. Neal Maupay scored the only goal of the match, which was his third goal in the last five league matches.

17th place, Brighton, host 18th place, Fulham, in Gameweek 20 in a match which could be seen as a ‘six-pointer’. The Cottagers lost back to back games in their double Gameweek against Chelsea and Manchester United. They are without a Premier League win in eight matches.

Everton have been creeping up the table as they have five wins from the last six Premier League games. Now their key players have returned from injury and suspension, we could see the dangerous top six challenging team that we saw at the start of the season.

One team The Toffees will be battling for a top six place are their Gameweek 20 opponents, Leicester City. The Foxes sit in third place after back to back wins in their double Gameweek. £7.2m midfielder, James Maddison has now scored in the last three Premier League games. Leicester’s last defeat came seven league games ago, against Everton.

Manchester United are flying high as they kept their top spot in the league with a 2-1 away win against Fulham. The Red Devil’s playmaker, Bruno Fernandes, picked up his ninth assist of the season. Fernandes has the second highest amount of points from any FPL player so far.

Top of the league will take on bottom of the league, Sheffield United this week. The Blades lost their last game, 3-1, against Tottenham and sit 12 points from safety.

Tottenham took their chances this week to get back to winning ways against Sheffield United. Harry Kane picked up his third goal in a row which made him the top FPL point scorer so far. The striker has 12 goals and 11 assists.

Gameweek 20’s highlight will be Liverpool’s visit to the Tottenham Hotspur Stadium. Out of form, Liverpool lost 1-0 to Burnley to extend their baffling run of five Premier League games without a win and four without even scoring. The hosts will hope to leapfrog the visitors, into the top four places.