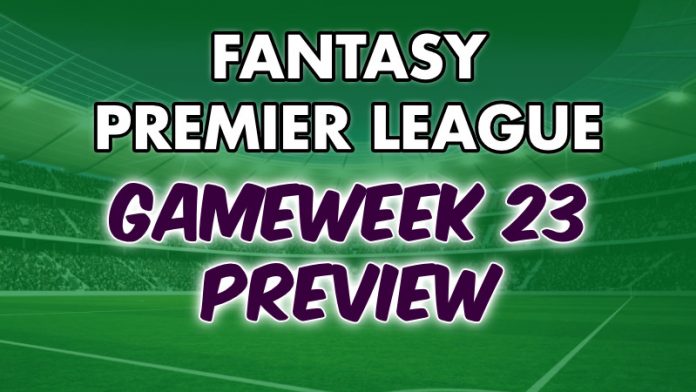 The Gameweeks keep rolling on. With just one day’s rest Fantasy Premier League Gameweek 23 is upon us.

At one end of the table, it was a record-equalling week for Manchester United while Liverpool struggled at Anfield once again. At the other end, Sheffield United took another step towards the great escape.

With limited time to make your transfer decision again, we help by looking at each Premier League teams’ percentage chance of winning, the most likely goalscorers and which defenders to target for a clean sheet.

Aston Villa let their opportunity to move into the top six slip as they lost 3-1 to West Ham in the last Gameweek. Ollie Watkins scored his ninth goal of the season and it was his third in the last four games.

In Gameweek 23, Aston Villa will host Arsenal. The Gunners’ unbeaten run came to an end as lost 2-1 to Wolves and had Bernd Leno and David Luiz sent off. Nicolas Pepe scored the only goal for Arsenal which was his second goal in the last three games.

Burnley stay bottom of the scoring ranks in the league following their 2-0 defeat against top of the league, Manchester City. With regular strikers Chris Wood and Ashley Barnes out injured, they didn’t manage any shots on target in the game. Both players are seen as doubts for their Gameweek 23 fixture.

Following a victory over Tottenham previously, Brighton managed a second shock in a row as they beat Liverpool 1-0. Goalkeeper, Robert Sanchez, kept his fourth clean sheet in a row and picked up a bonus point along the way. Sanchez is owned by just 1.7% of FPL managers despite his low price of £4.4m and point average of 6.2 per game, based on form. Brighton face Burnley in Gameweek 23.

Newcastle United couldn’t manage two wins on the bounce as they gave away their lead to lose 2-1 against Crystal Palace. One positive for The Magpies is striker Callum Wilson now has four goal involvements from the last three games.

Southampton take a trip up to Newcastle at the weekend after a Gameweek to forget against Manchester United. The Saints lost 9-0 to The Red Devils and this week we will see if manager, Ralph Hassenhuttl, sticks by his starting players or shuffles his pack. The crushing defeat was the fourth in a row for Southampton.

Fulham lost their third home fixture in a row and now sit eight points from safety. It was Leicester City that inflicted the damage and beat The Cottagers 2-0 midweek. Once again, Fulham will be playing at Craven Cottage and this time West Ham United are the visitors.

West Ham sit second in the form table after their impressive 3-1 win over Aston Villa. £5.3m FPL bargain, Tomas Soucek, picked up his eighth goal of the season and nine FPL points. The Czech midfielder continues to average one goal in every three games, just as he did at Slavia Prague. On top of this, it will be worth keeping an eye on £5.9m midfielder, Jesse Lingard, after he scored a brace on his debut for The Hammers.

Manchester United demolished Southampton, by nine goals to nil, at Old Trafford midweek. Bruno Fernandes and Aaron Wan-Bissaka starred from an FPL point of view as they both picked up 17 points. Fernandes’ goal and two assists made him the highest FPL point scorer so far.

Everton will play Man United in Gameweek 23 and they are coming off a hard-earned win over Leeds United. Striker, Dominic Calvert-Lewin picked up his first goal in eight league appearances. With the creative players, such as Lucas Digne and James Rodriguez, back in the side Calvert-Lewin is bound to have more chances in front of goal.

It’s now three defeats in a row for Tottenham after Chelsea beat them 1-0 midweek. On top of this, they haven’t found the back of the net in Harry Kane’s absence. The striker is reportedly set to return from injury earlier than expected.

West Brom head to The Tottenham Hotspur Stadium at the weekend after they let go of a lead to lose 2-1 to fellow relegation battlers, Sheffield United. The defeat meant they now sit just one point above bottom of the league, Sheffield United.

Wolves picked up their first win in the last nine games as they beat Arsenal 2-1. It was the midfield duo Ruben Neves and Joao Moutinho who picked up the goals for Wolves. £5.1m Neves was on penalty duty and converted it.

Wolves come up against Leicester City this weekend after their 2-0 win over Fulham. The victory moved Leicester up to third in the league. Playmaker, James Maddison, registered two more assists and 11 FPL points. Owned by just 15.1% of FPL managers, the £7.3m midfielder has three goals and three assists in his last six games.

Anfield has been a fortress for Liverpool in recent years. However, they are now four games without a win at home. Brighton beat them 1-0 to further damage their title hopes. The Reds now sit fourth in the table.

Gameweek 23 brings us a potential thriller as top of the league as Manchester City take on the reigning champions at Anfield. City won for a ninth Premier League game in a row. This time it was 2-0 at Burnley and that also made it six clean sheets in a row. Striker Gabriel Jesus scored for a second week in a row. With just 3.8% ownership, the Brazilian could be a great differential.

Sheffield United picked up three extremely valuable points against West Brom midweek. This moved them just one point off The Baggies, who sit in 19th, and made three wins in the last five Premier League games for The Blades. Veteran Billy Sharp was the hero again as he scored the winner and picked up nine FPL points.

Chelsea face bottom of the league, Sheffield this week and hope to continue a great start to Thomas Tuchel’s reign. Chelsea beat London rivals, Tottenham, midweek 1-0 which means they are undefeated under the new manager and are still yet to concede a goal.

Leeds United now have back-to-back home defeats after losing 2-1 to Everton. Raphinha is the player in form for Leeds as he has two goals and two assists in the last three games. The £5.3m midfielder has an ownership of just 1.4%.

Leeds take on Crystal Palace this week at Elland Road. The visitors made it back-to-back wins away at Newcastle as they won 2-1. Eberechi Eze picked up his fourth assist of the season in the game. The £5.8m midfielder is averaging 5.0 points per week.