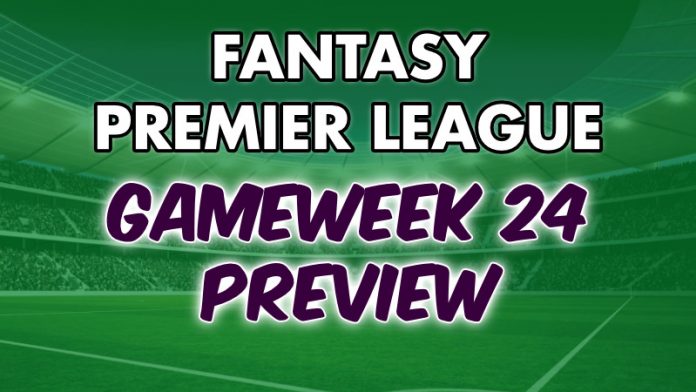 Fantasy Premier League Gameweek 24 has added significance because it is a Double Gameweek. Burnley, Everton, Fulham and Man City will all play twice.

As usual, we look at each Premier League teams’ percentage chance of winning, the most likely goalscorers and which defenders to target for those clean sheets.

Leicester City were held to a goalless draw away at Wolves in the last Gameweek. The top four hopefuls couldn’t find that killer blow, even with Jamie Vardy making a cameo appearance after his injury. Full back, James Justin, picked up three FPL bonus points to go with his clean sheet points. Based on recent form, the £5.2m defender is averaging 6.7 points per game.

In Gameweek 23, The Foxes host a weary looking Liverpool after their 4-1 drubbing against Man City. One positive for the visitors is that Mo Salah scored their first home goal after firing blanks in the previous three game at Anfield. This was the third goal in the last nine games for the Egyptian forward.

Crystal Palace lost 2-0 against Leeds in their last fixture. The Eagles were without their talisman, Wilf Zaha, and it meant they have now lost 17 out of the previous 19 games without him. There is no known return date for their top scoring winger.

Burnley are up against Palace this weekend after their 1-1 draw with Brighton. The Clarets would have seen this as a wasted opportunity as they took 20 shots during the game. If they continue to create the same level of chances this week, Burnley could make the most of facing Palace without Zaha.

Top of the league, Manchester City, are in outstanding form and they swept aside the champions, Liverpool, last week in the 4-1 thrashing. A brace from Ilkay Gundogan made it nine goals in the last 11 games for the £6.0m bargain. He is still averaging the highest amount of points from any player, at 8.4 points per game. However, the German midfielder did miss a penalty against Liverpool, which could see him taken off spot-kick duty going forward.

Manchester City will aim to make it 11 Premier Leagues wins in a row and it will be Jose Mourinho’s Tottenham who stand in the way of Pep Guardiola’s men. Spurs got back to winning ways as they beat West Brom 2-0 at home. The surprise return of Harry Kane was a huge boost and he picked up his 13th goal of the season.

Brighton held on to a point in their 1-1 draw with Burnley last week. The Seagulls had previously managed four clean sheets in a row in the league. On the other side, Brighton have managed just four goals in the last six league games.

Gameweek 23 sees Aston Villa head to Brighton and the visitors managed a great win against Arsenal last week. Ollie Watkins scored the only goal of the game and this made it four goals from the last five games for the £6.4m forward.

Southampton’s bad run of form continued as Newcastle beat them 3-2 in the last gameweek. The Saints have now lost five Premier League games in a row. There was a debut goal for new signing, Takumi Minamino, which earned him 7 FPL points. The midfielder is priced at £6.0m and is owned by just 0.3% of managers.

Fellow out of form side, Wolves, take on Southampton in Gameweek 24. Wolves picked up a point against Midlands rival, Leicester City, in their 0-0 draw. The visitors have just one win in the last ten Premier League games.

18th placed West Brom are now 11 points from safety after they lost 2-0 to Tottenham. The Baggies have picked up just five points out of an available 30, since Sam Allardyce took over as manager.

West Brom are up against Manchester United this week and their visitors were left disappointed last week as they had to settle for a draw against Everton after conceding a last-minute goal. £7.9m striker Edinson Cavani put in another strong performance as he picked up his second goal in as many games. Owned by just 4.6% of players, Cavani could prove to be a great differential if his form continues.

11th host 10th in the Premier League standings as the ever entertaining Leeds travel to Arsenal. Leeds have scored and conceded 38 goals this campaign making them among the highest scorers but also the weakest defences. However, they are coming off a solid 2-0 victory over Palace, resulting in their 7th clean sheet from 23 league matches. Most eyes will be on the 51% selected Patrick Bamford who has accrued 130 points following his 12 goals and 8 assists.

Meanwhile Arsenal, after a resurgence in form following a dismal December, are coming off back to back losses. If they’re to even an outside chance of the top 4 they need to start winning and doing so consistently now. Alexandre Lacazette and Bukayo Saka have been in the in-form men for Arteta but interestingly their combined goals and assists doesn’t reach that of Bamford.

Everton sit just three points outside the top 4 but have two games in-hand over all the teams above them. Confidence will be relatively high going into their Gameweek 24 match with Fulham following an extra time victory against Tottenham in the FA Cup and a last minute equaliser against Man Utd last time out in the Premier League. Calvert-Lewin leads the way in terms of points and TSB although he is a minor doubt.

Fulham are far more defensively sound than they were at the beginning of the season. They are conceding an average of one a game over the last eight but are failing to convert that hard work into points. During those eight games, they have five draws and three defeats. From a FPL perspective there aren’t any players who are really standing out.

The Hammers are arguably the surprise of the season so far. They sit in sixth place, on the same number of points as Chelsea. Consequently, their FPL assets have become more popular. Aaron Cresswell, Michail Antonio and Thomas Soucek are respectively their most picked players. The former has quietly accumulated eight assists already which has contributed to making him the highest point scoring defender so far.

Sheffield United’s season has been the opposite of West Ham’s. They sit rock bottom of the Premier League but are showing signs of life in recent games. They have managed to win two of their last four.

Chelsea are Gameweek 24’s most likely team to pick up a victory. Since Thomas Tuchel took over from Frank Lampard they have taken 10 points from 12 available, including 9 of their last 9. Their assets could prove great differentials. The only problem is there is still uncertainty about Tuchel’s preferred 11.

Newcastle have won two of their last three but are going into the Chelsea game with a decimated defence. With Wilson out for a while yet there FPL assets are ones to avoid for Gameweek 24.

Goalscorer: Not yet available

Goalscorer: Not yet available