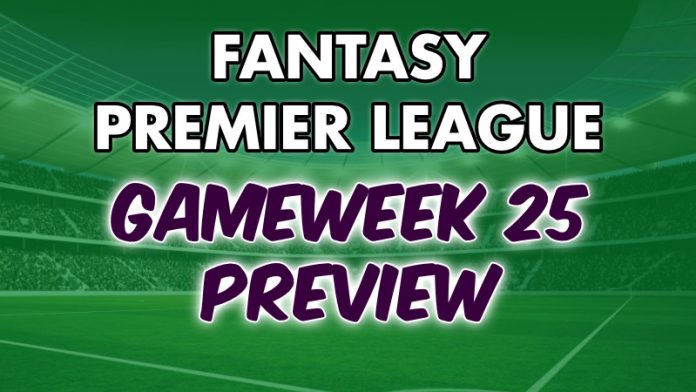 After the midweek double Gameweek fixtures, there is a just a day’s rest for Fantasy Premier League managers before Gameweek 25 begins. Make sure you don’t get caught out by the 18:30 deadline on Friday.

Notably, this Gameweek is another double Gameweek, with Leeds and Southampton playing twice.

In the last Gameweek, top of the league, Manchester City, marched on whilst the teams below them continue to jostle for the European places.

With limited time to make your transfer decision again, we help by looking at each Premier League teams’ percentage chance of winning, the most likely goalscorers and which defenders to target for those clean sheet points.

Wolves came back from a losing position to win 2-1 away at Southampton last week. Midfielder, Ruben Neves, picked up 13 Fantasy Premier League points thanks to his assist and converted penalty.

In Gameweek 25, Wolves take on the very entertaining Leeds United. The visitors took part in another high scoring game last week however they were on the losing end of the 4-2 result. Brazilian midfielder, Raphinha picked up an assist in the game which means he has provided an attacking return in all of the last five Premier League games. Priced at just £5.4m and with a low ownership of 5.6%, he could be a great differential as Leeds go into their double Gameweek.

Southampton couldn’t keep hold of their lead last week and ended up losing 2-1 to Wolves. The defeat is the sixth in a row for The Saints. On the bright side for Southampton, it was striker Danny Ings who scored their only goal. Only three other Premier League strikers have a better shooting record over the previous five fixtures, than Ings.

Chelsea’s unbeaten run under new manager, Thomas Tuchel, continued as they beat Newcastle 2-0 at home. Timo Werner, put in another top performance and managed his first Premier League goal since Gameweek 8. The German striker does, however, now have three assists and a goal in the last three games. This week, The Blues play Southampton at St Mary’s.

Burnley picked up a win and a draw in their double Gameweek. Striker, Jay Rodriguez scored one goal and grabbed two assists as he filled in for injured Chris Wood. £5.8m Rodriguez picked up 19 FPL points as a result.

West Brom head to Turf Moor this week and they are coming off a good performance against Manchester United. Although the game finished 1-1, The Baggies will feel they should have won based on the chances they created. New striker, Mbaye Diagne, caused all kinds of havoc for the United defence and he picked up his first league goal in a West Brom shirt. The £6.0m Senegalese frontman now has one goal and two assists from four appearances.

The misery continued for Liverpool as they made more defensive mistakes to let go of a lead and lose 3-1 to Leicester City. The result saw them move out of the top four as their battle to find their form goes on. One Liverpool player who is still putting numbers on the FPL board is Mo Salah. The Egyptian forward grabbed his 17th goal of the season, which means he is still the league’s top goalscorer.

Gameweek 25 brings us a Merseyside derby like we haven’t seen in recent years as a win for Everton would bring them level on points with their great rivals, Liverpool. However, The Toffees are coming off back to back defeats at the hands of Fulham and Manchester City. They will hope their top goalscorer, Dominic Calvert-Lewin, will return from injury to face their local rivals.

Fulham picked up their first win in 13 Premier League games as they beat Everton 2-0 at Goodison Park. The star of the show was new signing, Josh Maja, who scored both goals to seal the win for The Cottagers. In their second fixture of the Gameweek, Fulham shared points with Burnley after it ended 1-1.

It’s a relegation zone clash this week as bottom of the league, Sheffield United, take on Fulham at Craven Cottage. Sheffield are coming off a bad 3-0 loss to West Ham last week and they sit 14 points from safety. The Blades will be expected to throw everything at this game to try and bridge the gap.

West Ham United were clinical once again as they beat Sheffield United 3-0 to move into fifth place. The Hammers have only lost once in their last ten league games. Defender, Aaron Cresswell, picked up his ninth assist of the season, which earned him 12 FPL points with the clean sheet too. Thanks to Cresswell’s delivery, West Ham have the scored the joint highest amount of goals from corners this season (joint with Chelsea).

West Ham host Tottenham in a London derby for Gameweek 25 and their visitors were the latest victims of rampant Manchester City. Spurs lost 3-0 at the Etihad but will need to bounce back in this game to stop their chances of a top four spot slip away.

Aston Villa’s game last week ended goalless against Brighton. On paper, this would have been disappointing but given how the game went they can be thankful for the single point. This was largely down to Emiliano Martinez. He is FPL’s top scoring keeper, making nine saves to earn his clean sheet and three bonus points, which overall added 12 points to his tally.

Leicester City head to Villa Park in Gameweek 25 following their outstanding 3-1 win against Liverpool last week. £6.8m Harvey Barnes and £7.3m James Maddison were both on the scoresheet as they continued their fine form. The English midfielders are averaging 6.3 and 6.0 points per game, respectively.

Arsenal were back to winning ways last week as they beat Leeds 4-2 in an entertaining game. Pierre-Emerick Aubameyang returned to the starting team and picked up a hattrick along the way. The Arsenal captain has scored five goals in his last two starts for The Gunners. Owned by just 6.7% of FPL managers, Aubameyang could prove to be a great differential in the second half of the season.

Manchester City take a trip to the capital this week to face Arsenal. The Citizens added two more victories to their tally in their double Gameweek last week by beating Tottenham and Everton. Ilkay Gundogan scored two goals and picked up an assist to earn 19 FPL points, despite only featuring in one of their two games.

Manchester United’s title contention stuttered again as they drew 1-1 with relegation battling side, West Brom. From an FPL point of view, it was another good week for Bruno Fernandes who volleyed home his 14th goal of the season. Defender, Luke Shaw, picked up his fourth assist in the last three weeks. Priced at £5.0m and owned by 7.9%, Shaw is a great option in defence.

The Red Devils face Newcastle at home in Gameweek 25. The visitors are sitting just above the drop zone, in 17th, after losing 2-0 to Chelsea. With striker, Callum Wilson, not expected back until Gameweek 31, The Magpies are going to have to find the goals from another source.

Brighton were frustrated because of their lack of potency in front of goal, once again, as they drew 0-0 with Aston Villa. The clean sheet was Brighton’s fifth in the last six Premier League games. Owned by just 4.9% of FPL managers, Lewis Dunk, attracted more bonus points and he is now averaging 7.2 point per game.

Crystal Palace head to Brighton for an M23 derby match in Gameweek 25. Palace lost 3-0 last week against Burnley as they continue to struggle without Wilf Zaha. Their talismanic forward is still set to be out injured which could mean another clean sheet for Brighton.

Leeds United take on Southampton in their second fixture of the Gameweek. This will be the first meeting between the two sides since 2012. Leeds have picked up 14 points at home so far this season and Southampton have 13 points on the road.

Naturally, it would be wise, without taking hits, to maximize the number of Leeds and Southampton players in your team for GW25.