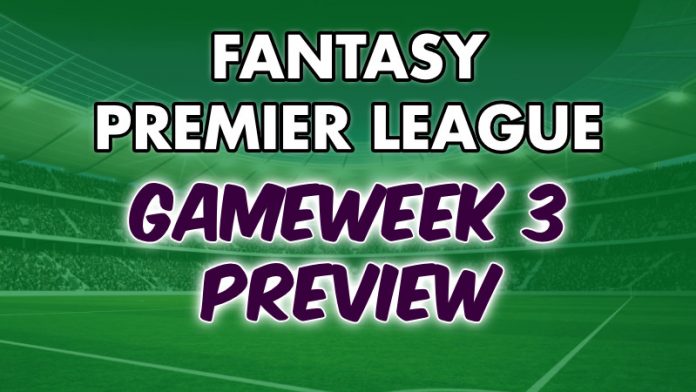 During Gameweek 2’s focus on the Manchester clubs, we saw an awesome performance from the Man City attack as they took apart the solid Wolves defence. In contrast, we saw a blunt Man United performance, seemingly due to insufficient pre-season preparation.

The Gameweek brought a record number of goals and if this is a sign of things to come, investing in the most likely goalscorers will be key to getting those green arrows.

Every week we’ll be looking at the teams’ percentage chance of winning, the most likely goalscorers and any notable differential options.

Manchester United began their season with a disappointing 3-1 loss against Crystal Palace. They had limited time for preparation during the break, having just one pre-season friendly and multiple players absent on international duty. This showed in their first game as they faced Roy Hodgson’s well prepared side.

The Red Devils go to Brighton in Gameweek 3, who claimed a good win away at Newcastle in Gameweek 2. The Brighton defence is starting to look strong, with Ben White looking like a great addition, as they didn’t allow any shots on target during that Newcastle game.

Everton impressed again in Gameweek 2 but this time showed far better finishing with a 5-2 victory over West Brom.

This week Everton face an in-form Crystal Palace who turned over Man United at Old Trafford. Palace look much improved going forward so far this season and will be quietly confident of stopping the early Everton hype train.

Despite star player Matheus Pereira’s efforts, West Brom took another beating last week, losing 5-2 to Everton. The newly promoted side displayed another poor defensive performance by allowing 13 shots in the box, six of which were in the six yard box.

In Gameweek 3, The Baggies host Chelsea, who will be looking to bounce back after their 2-0 defeat to reigning Champions, Liverpool. Both sides went down to ten men in Gameweek 2, which contributed to their defeats. Timo Werner will certainly be looking at the fixture to get off the mark.

Burnley host Southampton in Gameweek 3. The Claret’s played their first game of the season in Gameweek 2, where their make shift defensive couldn’t hold out an attacking Leicester City, resulting in a 4-2 win for the Foxes.

Similarly, Southampton slumped to a 5-2 defeat to Tottenham. The Saints’ high line defence was exploited by Spurs and the rest of the team appeared to run out of steam in the second half. However, the stats show Southampton had more shots, on and off target, in the game. If Ben Mee and James Tarkowski are still out with injury, Danny Ings will stand a strong chance of marching the Saints to victory.

John Egan’s red card for Sheffield United against Aston Villa largely contributed towards their 1-0 defeat in Gameweek 2. As a result, there are still questions marks around the solid Sheffield defence that we saw last season. Gameweek 3 sees The Blade’s host an exciting Leeds United.

Bielsa’s side took the three points in a thrilling 4-3 win over Fulham in Gameweek 2 where their free flowing, attacking style was on show once again. In their first two games they have scored seven, but also conceded seven.

In terms of the odds, the two Yorkshire sides are closely matched.

Once Harry Kane and Heung Min Son sussed out the space Southampton’s defense were leaving in behind, they lead Tottenham to a seemingly comfortable 5-2 victory. Jose Mourinho will still be disappointed with parts of their performance, as they allowed Southampton to take more shots than they did.

Spurs host Steve Bruce’s Newcastle in Gameweek 3, who are coming off a poor defeat at home against Brighton. The Magpies didn’t manage a single shot on target during the fixture and they will miss the creative threat of Allan Saint-Maximin, should his injury keep him out of the Tottenham match.

Whilst Gareth Bale is preparing to make his return to the Premier League, the Tottenham forwards will be fighting for their places and will see a home match against Newcastle as a good opportunity to impress.

Manchester City began their 20/21 season in style with a 3-1 victory away at Wolves. The Citizens looked dangerous, as always, in attack. Their defence was opened up several times by Wolves, who only managed to get one shot on target out of nine.

This week City face Leicester, who will look to exploit City’s defense by striking on the counter with their pacey attack. A lot of FPL managers will be looking at Harvey Barnes who registered a goal and assist in their 4-2 win over Burnley in Gameweek 2.

However, with Jonny Evans still a doubt in defence, the outstanding Kevin De Bruyne will lead City’s attack from his new number 10 position, where he created a chance every 15 minutes against Wolves.

A late goal for Arsenal saw West Ham lose for the second week in a row, despite taking twice as many shots as their Gameweek 2 opponents and matching their shots on target. Interestingly, the Hammers will be without manager, David Moyes, and centre back, Issa Diop, following postive tests.

Wolves meanwhile lost 3-1 to an impressive Man City side. They did cause a lot of trouble for Pep’s defense, though. Raul Jimenez is looking very sharp and claimed his second goal of the season. The Mexican striker tops the odds for the most likely goalscorer in this fixture.

Fulham took part in an end to end thriller against Leeds United in Gameweek 2 but they still lost 4-3 despite creating more chances. Talisman, Aleksandar Mitrovic, looked in good form as he scored his first two goals of the season.

Scott Parker’s side host Aston Villa in Gameweek 3, who picked up a win in their opening Premier League fixture against Sheffield United. Playing against ten men for 79 minutes, Villa took 18 shots at Sheffields goal but only hit the target twice and hit the net only once.

The teams look evenly matches going into Gameweek 3. Villa will want to be more clinical in front of goal than they were against the Blades. Their defence will have to be up for it with the ever battling Mitrovic, though.

Liverpool impressed against Chelsea, even before Christensen’s red card, eventually going on to win 2-0. With Fabinho slotting into the backline, we saw a much more solid defence from the Champions and the introduction of top class playmaker, Thiago Alcantara only added to the excitement.

Gameweek 3 brings us a follow up of the 2020 Community Shield match, as Arsenal visit Anfield. During the pre-season match, Arsenal claimed victory on penalties after matching them for the 90 minutes. Arteta will look to use his tactical acumen in the rematch but facing Liverpool at Anfield is daunting task for any team in the world.

GW3 presents many viable options for the captaincy. Despite being away from home, Timo Werner is the most likely goalscorer, at least according to the odds. Therefore, we have decided to give him the armband. Also, after Jorginho missed his penalty against Liverpool, this could be the chance for Werner to take charge of penalties going forward for Chelsea.

Alternative options include Kevin De Bruyne, Harry Kane and Mohamed Salah. All of them look to be appetising options in their home fixtures. Following yet another world class performance though, KDB stands slightly higher than the England captain and the always dangerous Salah. If the Belgian midfielder continues to play in an advanced number 10 role, he looks like he will have plenty of double digit hauls in a high scoring Man City side.