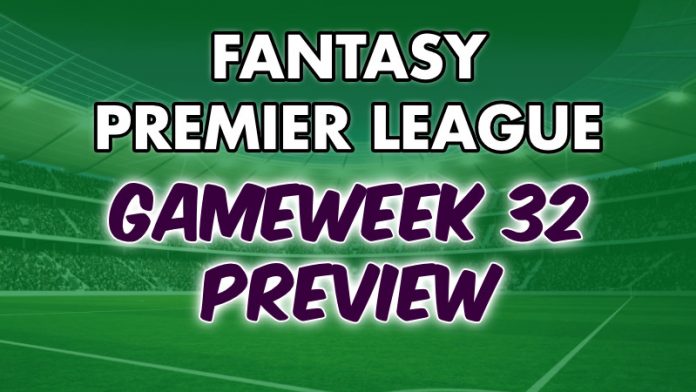 Gameweek 32 is just around the corner after a Premier League season without fans continued to give us more twists and turns.

Top of the league, Man City, hit a setback in their charge for the title and Newcastle pulled out a vital win in their fight for survival.

Kane and Son are must-haves for Gameweek 32… pic.twitter.com/XFGv68Q0qg

Injury-hit Everton drew 0-0 against Brighton last week as their season continues to drift without a solid push for a top six place. The draw made it four Premier League games without a win for the Toffees.

In Gameweek 32, Everton face Tottenham at home. The visitors are coming off a bad result and poor performance as they lost 3-1 at home to Manchester United. Son Heung-Min scored the only goal of the game for Spurs, which was his first since Gameweek 23.

Newcastle welcomed back some of their key attacking players from injury and won 2-1 at Burnley as a result. Allan Saint-Maximin was involved in both goals after coming off the bench. The midfielder’s goal and assist earned him 12 FPL points.

West Ham take on Newcastle this week after continuing their outstanding form with a valuable 3-2 win over Leicester City. Once again, Jesse Lingard was the star as his brace contributed to the victory whilst registering 14 FPL points. Priced at just £6.5m, Lingard is averaging 9.5 points per game based on form.

Wolves snatched a late win after a 92nd minute goal against Fulham last week. Adama Traore was the man who found the back of the net for Wolves, which was his first of the season.

Wolves will hope to build on the momentum in their match against bottom of the league, Sheffield United, in Gameweek 32. The Blades were swept aside by Arsenal last week in a game which ended 3-0 to the Gunners.

After a disappointing defeat the week before, Arsenal bounced back and won 3-0 away at Sheffield United. Alexandre Lacazette scored two of the goals to make it five goals in the last six games for the French striker. Owned by just 8.3% of FPL teams, Lacazette could be a great differential for the remainder of the season.

Fulham head to the Emirates this weekend to face Arsenal after a missed opportunity against out of form, Wolves. The Cottagers fell to a 1-0 defeat in the 92nd minute and they now sit six points from safety.

Manchester United strengthened their position in the top four after beating Tottenham 3-1. Edinson Cavani put it in a man of the match performance and came away with a goal and an assist. If the striker can keep fit, he is a great differential option with just a 2.2% ownership.

The Red Devils will take on Burnley at Old Trafford this week. The Clarets lost 2-1 to Newcastle last week which may have dragged them into a relegation battle. £4.8m striker, Matej Vydra scored for the second week running, further cementing his place in the starting XI.

Leeds ended top of the league, Man City’s, winning streak in their surprise 2-1 victory. Defender, Stuart Dallas scored both goals for Leeds which gave him 17 FPL points, the most from any player in the gameweek.

The next challenge for Leeds will be the reigning champions, Liverpool. Jurgen Klopp’s side appear to have turned a corner in the league as their 2-1 home win against Villa made it three in a row. Mo Salah’s goal put joint top of the goalscoring leader board with 19 so far.

Following the embarrassing loss to West Brom, Chelsea got back on track by beating Crystal Palace 4-1. American international, Christian Pulisic, got his name on the scoresheet twice and his brace earned him 15 FPL points.

Chelsea are up against Brighton in Gameweek 32 after the Seagulls held Everton to a goalless draw last week. The clean sheet was the tenth of the season for Brighton’s defence and moved them seven points clear of the relegation zone.

Tottenham have a double Gameweek this time round and their second match will be at home against Southampton. In their other league match with each other, Spurs came out with a 5-2 win where Son Heung-Min scored four goals.

Southampton are coming off a poor 3-0 defeat to bottom three side, West Brom. Every point will be crucial for the Saints over the final games of the season to ease them from spiralling down towards the bottom three.

Aston Villa couldn’t capitalise on Liverpool’s poor home form of late, despite taking a first half lead. Ollie Watkins scored his 12th goal of the season before the Villains slipped to a 2-1 defeat.

Manchester City hit a minor setback in their title charge as Leeds inflicted the fourth defeat of the season. The Citizens still sit 11 points in the lead, even after losing 2-1. Ferran Torres scored City’s only goal of the game.

Leicester City couldn’t put a comeback together after being down 3-0 against West Ham, the match finished 3-2. Kelechi Iheanacho added two more goals to his tally which made it seven goals in the last five games. The £5.9m striker is now averaging 7.5 points per game based on form.

West Brom picked up another huge result last week by beating Southampton 3-0. Another player in top form is Matheus Pereira. The midfielder converted a penalty and is now averaging 15 points per game based on form. Leicester will host the Baggies to complete the Gameweek 32 fixtures.

Goalscorer: Odds not yet available