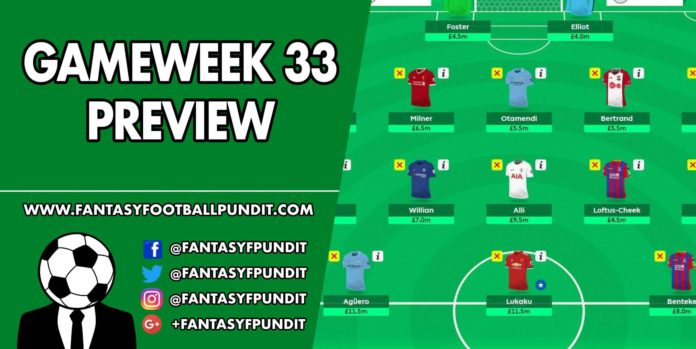 We will be previewing each Fantasy Premier League Gameweek throughout the season. Team fixtures, captain choices and which players to transfer in/out will all be discussed. Here is our FPL Gameweek 33 preview.

Gameweek 33 is the last before the big Double Gameweek 34. Naturally your squad should be built around this Double Gameweek with hopefully the intention of using one of your chips in it. Ideally a balance will be struck between a good 11 for Gameweek 33 but still taking into account the subsequent Double Gameweek. Arsenal are an interesting example as they have the best Gameweek 33 fixture, at home to Southampton, but don’t have a Double Gameweek in 34. Chelsea players appear a must for the next two Gameweeks despite a disappointing home defeat to Tottenham in Gameweek 32. They face West Ham at home in Gameweek 33 before going on to face both Southampton (a) and Burnley (a) in their Double Gameweek. Leicester players should also be highly sought after as they are at home to Newcastle in this Gameweek and then go on to face Burnley (a) and Southampton (H) for their double. Man Utd players are also a must for Gameweek 34. However, FPL managers face the interesting conundrum of Man Utd being away to Man City beforehand. As a result some managers may have to play Man Utd players at Man City to incorporate them into their teams the following week. Liverpool players popularity has started to diminish due to a derby fixture away to Everton and them not having any Double Gameweeks this season. It is also important to note that are a lot of the teams with a Double Gameweek in 34 have blanks in Gameweek 35. Therefore we can only hope you still have your free hit chip available for Gameweek 35. 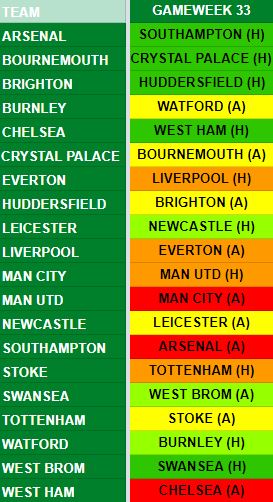 There are several possibilities for the Gameweek 33 captaincy. We are going with Pierre-Emerick Aubameyang following his two goals from Gameweek 32.

Pierre-Emerick Aubameyang scored twice last week at home to Stoke. Arsenal face a similar level of fixture when they host Southampton in Gameweek 34. The Gabon international has impressed since his arrival of Dortmund. His current goal tally for Arsenal along with another attractive fixture makes him arguably this week’s best captain pick.

Nobody doubts the quality of Eden Hazard but there is fair criticism regarding his sporadic and inconsistent FPL point scoring. He hasn’t scored in his last four games. However, previous to that, he scored five goals in four league games resulting in other 40 points. Chelsea host West Ham this week so if you’re backing Eden Hazard to be at his best then he is more than a reasonable captain choice.

Who Liverpool are playing doesn’t seem to matter to Mohamed Salah. He has already scored 29 league goals this season and few people will be backing against him to add to that away to Everton. There are of course better fixtures to captain players on but given the Egyptian international’s incredible form and big ownership he will be a popular captain pick.

Jamie Vardy is also having an impressive season. He has scored in each of his last two games. A home fixture to Newcastle gives justification to FPL managers who wish to give him the captaincy.

Harry Kane made an early return last week suggesting he will be thrust back into the starting lineup when Tottenham travel to Stoke. The Potters sit 19th in the table and have lost their last three games. This isn’t the best form to be taking into a game where Harry Kane is lining up against you. As a result Tottenham’s star man is yet another good captain choice.

Players In and Players Out

Here are the top 5 players you should be transferring in and out of your team prior to the Gameweek 33 deadline. If you expect a player to go down after a given Gameweek it is wise to transfer him out early to avoid the likely price decrease. Likewise it is sensible to transfer in a player early that you believe will go up in price before the deadline. These top 5 are based on potential price changes, fixtures and general form. We will also try and offer players from different teams.