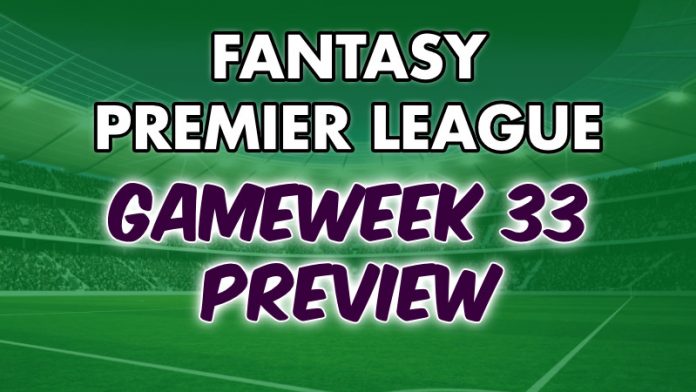 With less than a day’s rest, Gameweek 33 will come around fast after the mini Double Gameweek which spread from last weekend, into midweek.

Premier League football hit the headlines for other reasons with the proposed European Super League facing unprecedented backlash. In the meantime though, Manchester City took another step closer to the title and Sheffield United’s relegation was confirmed.

At least the #EuropeanSuperLeague has united football fans. Haven’t seen one person for it. ✊

Arsenal scraped a point against bottom three side, Fulham, last week. After Eddie Nketiah’s 97th minute equaliser, the game finished 1-1. The Gunners may now hang their hopes of a European spot on success in the Europa League.

In Gameweek 33, Arsenal will face Everton at home. The visitors are also coming off a disappointing result against Tottenham. After two defensive mistakes lead to two goals conceded, Everton had to settle for a 2-2 draw. Gylfi Sigurdsson scored both goals for the Toffees, which earned the midfielder 15 FPL points.

Liverpool’s winning streak looked set to continue until they conceded a late equaliser and drew 1-1 with Leeds. Defender, Trent Alexander-Arnold was in the FPL points again after picking up his fifth assist of the season. After reigniting his top-class form in recent weeks, the right back is now averaging 10.3 points per game, based on form.

Reigning champions, Liverpool, will be up against Newcastle United in Gameweek 33. The Magpies earned another valuable victory last week by beating West Ham 3-2 and moving closer to guaranteeing another season in the Premier League.

West Ham lost their point cushion, which was keeping them in the top four, by losing 3-2 to Newcastle. The Hammers have conceded 11 goals in the last five games, which is the third highest in the league. On a positive note, Jesse Lingard’s goalscoring run is still alive after he scored for the fourth week running to make it nine goals in ten appearances.

Chelsea put on a dull display in their goalless draw with Brighton midweek. Even though they only took a point from the match, it was enough to move the Blues back into the top four. On top of this, the clean sheet was the ninth out of 13 league games under Thomas Tuchel. Fourth will play fifth in Gameweek 33, as West Ham host Chelsea in a significant match in the top four race.

Sheffield United’s relegation was confirmed after losing 1-0 to Wolverhampton Wanderers. Although the Blades had an outstanding season last year, they couldn’t replicate that form and they will look to rebuild in the second-tier next season.

Sheffield’s rebuild can begin immediately in their Gameweek 33 fixture with Brighton. Even though the Seagulls are still fighting for survival, they managed a valuable point against Chelsea in their last game. Goalkeeper, Robert Sanchez picked up 9 FPL points in the goalless draw with thanks to his third clean sheet out of the last four games.

Wolves made it back-to-back victories by beating Sheffield United 1-0. Striker, Willian Jose netted his first goal for Wolves and the defence mad it three clean sheets from the last five games.

After slipping closer to the bottom three, Burnley will be desperate for points as they take on Wolves this week. The Clarets’ 3-1 defeat to Manchester United made it three defeats in a row.

An 87th minute equaliser helped Leeds extend their unbeaten run to five games as they drew 1-1 with Liverpool. Defender, Diego Llorente scored the late goal with Jack Harrison providing the assist. With a steady form average of 6 points per game, £5.4m Harrison has three assists and one goal in his last three appearances.

Leeds United take on their old rivals, Manchester United, in Gameweek 33. United made it five league wins in a row by beating Burnley 3-1. Mason Greenwood is the in-form player for the Red Devils after his brace gave him 15 FPL points. Priced at just £7.0m and owned by 2.9%, Greenwood is averaging 10.7 points per game based on form.

After both sides went down to ten men, Aston Villa were on the losing end of a 2-1 match with Manchester City. The Villains are now five games without a clean sheet whereas, they had previously recorded one clean sheet in every two league fixtures.

Aston Villa will hope their fortunes change this week as they West Midlands rivals, West Brom. The Baggies are coming off a tough 3-0 defeat to Leicester which has left them nine points from safety with six games to go. With 62 goals conceded, Sam Allardyce’s side have the worst defensive record in the league.

Leicester City got back to winning ways by beating West Brom 3-0 at home midweek. Both strikers, Jamie Vardy and Kelechi Iheanacho got themselves on the scoresheet in the victory. Priced at £6.1m, Iheanacho’s goal made it eight in the last six league games.

Crystal Palace head to the King Power Stadium to conclude the Gameweek 33 fixtures. In their last game, the Eagles lost 4-1 to London rivals Chelsea. Christian Benteke carried on his run in the starting XI and picked up his sixth goal of the season.