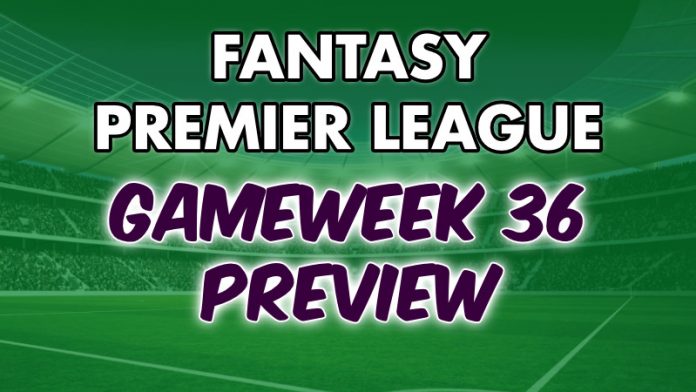 Following a huge 15-fixture Gameweek, we go straight into Gameweek 36 with a reduced line up of eight Premier League matches. For the lucky Fantasy Premier League managers who still have it, this is a great time for the Free Hit Chip.

In the last Gameweek, Manchester City were crowned as the 2020/21 Premier League champions. At the other end of the table, two further teams joined Sheffield United and had their relegation confirmed.

At least the #EuropeanSuperLeague has united football fans. Haven’t seen one person for it. ✊

Newcastle United’s Premier League safety was confirmed last weekend and their 4-2 victory over Leicester helped them get there. Callum Wilson’s brace earned him 13 FPL points however it was £4.7m midfielder Joe Willock who grabbed the headlines with his fourth goal in his last four appearances.

In Gameweek 36, Newcastle host this season’s champions, Manchester City. With other results going their way, the fifth Premier League title was confirmed for the Citizens. In their last match, City lost 2-1 to Chelsea with Raheem Sterling scoring their only goal of the game. The England International now has ten league goals this season.

Burnley’s top-flight status was confirmed last week as they beat Fulham 2-0. Chris Wood’s goalscoring form continued with the New Zealand striker netting his eighth goal from the last eight games. With just a 3.4% ownership, the £6.4m striker is averaging 8.5 FPL points per game based on form.

Leeds United head to Turf Moor this weekend after another entertaining performance against Tottenham. In the 3-1 victory, Patrick Bamford scored his 15th goal of the season and Stuart Dallas scored his eighth. So far this season, Leeds utility player, Dallas, has scored the most goals out of any Premier League defender.

Southampton’s double Gameweek ended with a 2-0 defeat to Liverpool and a 3-1 victory over Crystal Palace. Danny Ings scored a brace in the win against Palace which made it four goals in his last four appearance. However, the striker is suffering with reoccurring injuries, so these appearances have been spaced out over six Gameweeks.

Relegation was confirmed this week for London side Fulham after their 2-0 defeat to Burnley put them out of reach from safety. The Cottagers have picked up just one points from the last seven games. They head to Southampton in Gameweek 36.

Brighton fans will feel let down as their side lost 2-1 to Wolves from a winning position and had two players sent off. Lewis Dunk scored their goal before being shown the red card in the second half. Neal Maupay was the other player to be dismissed for the Seagulls.

Brighton take on West Ham this week, who are still chasing a top four finish after another setback last week. With no shots on target, the Hammers lost 1-0 to Everton. With three defeats from the last four, they are moving further from the Champions League spots each week.

Crystal Palace had a suitably up and down double Gameweek as they beat Sheffield United 2-0 before losing 3-1 away at Southampton. £5.5m striker, Christian Benteke, picked up 15 points after scoring in both games. Owned by 1.2% of FPL teams, Benteke has scored four in the last eight games.

The Eagles face Aston Villa this weekend after Villa also completed a double Gameweek last time round. With just one point from a possible six, the Villains lost 3-1 to Man United before taking part in a goalless draw with Everton. One positive was that captain, Jack Grealish, made his long awaited return from injury after missed 12 games.

Tottenham’s worries of missing out on the European places were heightened after they lost 3-1 to Leeds United. To even play in the Europa League next season, Spurs may have to rely on other teams slipping up. Son Heung-Min scored for the third week running, which took his tally up to 17 league goals this season.

Tottenham will be up against Wolves in Gameweek 36. Wolves came back from a goal down to win 2-1 against Brighton after a 90th minute winner from Morgan Gibbs-White. £6.0m Spanish winger, Adama Traore, scored the other goal which made it two goals and two assists in his last six games.

After a 3-1 defeat to Arsenal, it was West Brom who joined Fulham and Sheffield United in confirming relegation to the second-tier next season. Once again, Matheus Pereira showed his potential as he scored his tenth Premier League goal for the Baggies.

West Brom host former-champions, Liverpool this weekend. After their crown was taken by Manchester City, Liverpool responded with a thrilling 4-2 win over bitter rivals, Manchester United. Mo Salah bagged his 21st goal of the season and Trent Alexander-Arnold made it four assists in the last six games.

Everton picked up a valuable 1-0 win against West Ham before drawing 0-0 with Aston Villa. With back-to-back clean sheets and an assist, Ben Godfrey registered 18 FPL points. The Toffees now have four clean sheets from the last six games.

Everton host Sheffield United at Goodison Park, to conclude the Gameweek 36 fixtures. The Blades were handed their 28th defeat of the season by Crystal Palace last week. By losing 2-0, the bottom of the table side have managed just one goal in the last five games.