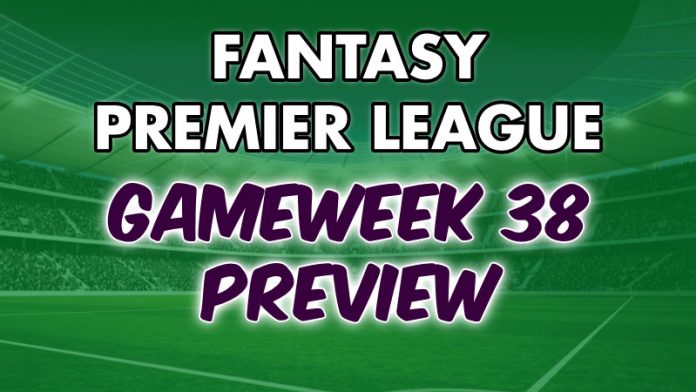 The final Gameweek of the season is upon us and it all comes down to this. One final push for Fantasy Premier League managers to get those green arrows and finish in the best possible position. If you’re behind in those mini-leagues maybe you’ll be taking a big risk to regain those points.

Although the relegation zone and the title winners have been decided, it will go to the wire for the European spots. Seven teams will battle it out in the final week for a place in next season’s Champions League or Europa League draw.

For the final time, we look at each Premier League teams’ percentage chance of winning, the most likely goalscorers and where to go for those clean sheets.

Arsenal continued to creep up on the European spots as they won their fourth league game in a row. In the 3-1 victory over Crystal Palace, Nicolas Pepe’s brace earned him 15 FPL points. The Gunners now sit just one point off the Europa League places.

In Gameweek 38, Arsenal host Brighton after the visitors turned over Manchester City last week. Although they played most of the game against ten men, the Seagulls came back from 2-0 down to win 3-2. Leandro Trossard opened the scoring for Brighton, which was his fifth of the season.

It seems no coincidence that as Jack Grealish returns to the starting line-up for Aston Villa and they earn their first win in three games. The Villains beat Tottenham 2-1 away from home with Ollie Watkin’s 14th goal of the season proving to be the winner.

Aston Villa will face Chelsea at the weekend. The Blues are coming off a vital win in their race for the top four as they beat Leicester and leapfrogged them into third place. Timo Werner won the winning penalty, which was converted by Jorginho. Werner now has an attacking return in each of his last four appearances.

Fulham snatched a point from Manchester United with a second half equaliser. £5.3m striker, Bobby Decordova-Reid has assists in back-to-back games after setting up Joe Bryan’s goal.

Fulham sign out from the Premier League by hosting Newcastle in Gameweek 38. The Magpies beat bottom of the league, Sheffield United, 1-0 in their midweek fixture. Once again, it was Joe Willock who popped up with a goal. Owned by just 2.1%, Willock’s sixth goal from his last six games earned him 11 FPL points.

Leeds United are ending the season strongly as they made it three wins in a row by beating Southampton 2-0. Patrick Bamford scored his 16th goal of the season and made his 11th assist in what has been an outstanding season for the striker. Leeds end their campaign against another side promoted last season in West Brom.

Unlike Leeds, the Baggies will be returning to the second tier of English football next season. In the previous Gameweek, West Brom lost 3-1 to West Ham however, Matheus Pereira picked up points once again. The Brazilian’s corner somehow found the back of the net meaning he has six goals and three assists in the last eight games.

Leicester City hit a major setback in their hopes for Champions League football as they lost to Chelsea and went from third down to fifth. One positive for the Foxes was Kelechi Iheanacho keeping up his goalscoring form by slotting home Leicester’s only goal in the 2-1 defeat. With 11 goals from the last 11 games, Iheanacho now sits just one goal behind teammate Jamie Vardy.

Leicester face Tottenham this week and both teams will be scrapping for points in the final game. Although they took an early lead, Spurs lost 2-1 to Aston Villa in their previous match. Steven Bergwijn smashed in his first league goal of the season, but it wasn’t enough for Tottenham.

Liverpool returned to the top four midweek after beating Burnley 3-0 away from home. Along with the clean sheet, Andy Robertson picked up two assists and 15 FPL points. The Reds aren’t home and dry just yet as they sit in fourth just on goal difference.

Liverpool will welcome their fans back to Anfield for their final game, where they hope to secure a top four spot. Crystal Palace are the visitors who have completed another, but final, steady season under Roy Hodgson. The Eagles lost 3-1 to Arsenal midweek with Christian Benteke scoring for the fourth game running. The £5.5m striker is still owned by less than 2% of FPL managers.

Manchester City lost for the second time in the last three games after a red card put them at a disadvantage, leading to a 3-2 defeat to Brighton. The Citizens were ahead by 2-0 after Ilkay Gundogan scored his 13th of the season and the exceptional Phil Foden scored his 8th. England international, Foden, picked up ten points and is still owned by less than 10% of FPL managers. However, he is far from certain to start in Gameweek 38.

Manchester City will lift the Premier League trophy in front of their fans this weekend. Prior to the celebrations, they will face an Everton team who have given themselves a big chance for European football next season after beating Wolves. The 1-0 win gave the Toffees their fifth clean sheet out of the last eight games.

Sheffield United will hope to end their time in the Premier League on a high in Gameweek 38. Especially after losing 1-0 midweek to Newcastle. The league’s lowest scorers are up against Burnley in their final game.

Burnley couldn’t stop Liverpool in their tracks towards a top four place midweek and they lost 3-0 at Turf Moor. Without Nick Pope between the sticks, the Clarets continued their record of conceding at least three goals with a replacement goalkeeper.

After going down in the first half, West Ham bounced back to win 3-1 against relegated West Brom. Michail Antonio took his tally up to ten for the season by scoring the third and final goal for the Hammers. The victory moved them into sixth place as they go into the final Gameweek.

West Ham’s final game of the season will be against, midtable, Southampton at home. After winning the previous two games, the Saints couldn’t keep their momentum going and lost 2-0 to Leeds.

Wolves have been ready for the season to finish for weeks and that showed again as they lost 1-0 to Everton last time round. The West Midlands side will take a midtable final position after a disappointing season, plagued with key injuries.

Wolves face Manchester United in Gameweek 38. After the Red Devils couldn’t find a second goal in front of their fans, Fulham equalised to close the game at 1-1. Edinson Cavani treated the supporters to a goal of the season contender from 40 yards out. The Uruguayan striker has four goals and two assists from the last seven games.

Good luck in the final Gameweek of the season and thanks for reading! And remember it’s ok to take some risks, even if they don’t pay off, to climb up those mini-leagues.