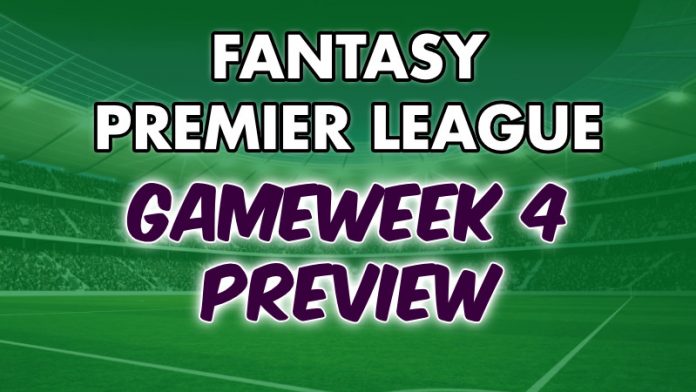 Gameweek 3 provided some upsets, controversial decisions and seven more penalties. These brought us to 21 overall, making penalty takers hot property (see our Set Piece Takers article for information on which players take the penalties for each club).

With an FPL team average of 43 points, the lower owned players were the ones to shine in GW3. Those unlikely heroes could be the differentials you need to gain points early on your league rivals.

Every week we’ll be looking at the teams’ percentage chance of winning, the most likely goalscorers and any potentially worthwhile differential options.

Chelsea went to The Hawthorns in GW3 and continued to show defensive frailties. Despite Kepa Arrizabalaga being dropped and new signing, Thiago Silva, making his debut, the Blues drew 3-3 with West Brom as all three shots on target taken by The Baggies hit the back of the net.

Crystal Palace visit Stamford Bridge in GW4 after their 2-1 loss to Everton. The Eagles troubled Everton for parts of the game but they just couldn’t match Ancelotti’s side. Chelsea will need to be more clinical this week, after taking 22 shots with 10 on target against the Baggies.

Everton continued their perfect start with their third win against Crystal Palace. Although they went down 1-0 in the first half, The Toffees showed great character and determination to take back control of the game and win 2-1, with DCL getting his fifth goal of the season.

Everton face Brighton in GW4, who are coming off a disappointing result against Manchester United. They lost 3-2 following the 100th minute winning penalty against them. Brighton did impress though, and showed creativity going forward as they took 12 shots in the box during the game.

Leeds took part in an evenly matched Yorkshire derby against Sheffield United, in GW3, where they came away with a 1-0 win. The Whites looked dangerous going forward again. They do have their young goalkeeper, Illan Meslier, to thank after his star performance earned them their first clean sheet of the season.

Manchester City visit Leeds in GW4 following their shock 5-2 home defeat versus Leicester in GW3. Although Leicester made the most of the opportunities they were given, Man City will be very disappointed with their defensive mistakes as they gave away three clumsy penalties in the game.

Pep’s men will be looking to bounce back after they were run ragged in GW3. Aymeric Laporte looks likely to return and sure up the defence. However, The Citizen’s will still be without injured strikers Jesus and Aguero.

A late penalty for Newcastle earned them a draw away at Tottenham Hotspur in GW3. The Magpies were lucky to get a result after the penalty was their only shot on target during the game and they faced 23 shots and 12 on target, in return.

In GW4 Newcastle play Burnley, who lost 1-0 in GW3 against Southampton in a fairly quiet match. The Clarets took twice as many shots in the box than their opponents and if they improve their conversion, they could out score a Newcastle team who lack creativity.

A fantastic performance for Leicester City saw them claim three points in the 5-2 victory versus Manchester City in GW3. The Foxes were very clinical as they took seven shots. All seven were on target and five of them were converted. Star striker, Jamie Vardy, bagged a hattrick and will look to add to his five goals to defend his Golden Boot.

West Ham also earned a very impressive victory with a 4-0 win over Wolves. Led by winger, Jarrod Bowen, The Hammers looked creative and registered 13 shots in the box against Wolves’, usually solid, defence. If both teams think attack is the best form of defence, then we could be in for another high scoring fixture.

Danny Ings tucked away his third goal of the season in Southampton’s GW3 win over Burnley. The Saints did lack creativity going forward as they only managed five shots in the games and only the one on target, leading to the only goal of the game.

Meanwhile, the Baggies earned a surprise point against Chelsea in the last Gameweek with a 3-3 draw. Although they were leading 3-0 in the first half, the highest conceding team in the league (11 goals against) couldn’t keep out Frank Lampard’s men and had to settle for a draw.

Arsenal face Sheffield United in GW4 after their 3-1 defeat to the Champions, Liverpool, in GW3. They did however beat them in the League Cup this week, albeit with vastly different lineups for both sides.

The Gunners managed just four shots in the Premier League game, with striker Alexandre Lacazette scoring for the third consecutive game, continuing to pick up points for just 5.3% of FPL managers.

Sheffield United have struggled in front of goal so far this season as they are the only Premier League team yet to score. The Blades will hope their fortunes will change in GW4 as they eye up Arsenal’s defence, who allowed 21 shots against them in GW3.

Wolves are coming off a disappointing 4-0 loss at West Ham, which will have come as a big shock to the players as well as the fans. They will need to regain their defensive stability if they’re to challenge for the European spots come the end of the season.

GW4 presents Wolves with a great chance to get back on track as they host Fulham, who took a 3-0 defeat to Aston Villa at Craven Cottage in GW3. Fulham have now lost their three opening games and conceded ten goals in the process. Many managers have stocked up on Wolves assets, so a Fulham win/clean sheet could shift the Gameweek dramatically.

Manchester United will face Tottenham in a so called ‘top six’ clash. United just about saw off Brighton in GW3 following a controversial end which saw a penalty awarded retrospectively after the final whistle. The penalty was converted by Bruno Fernandes which sealed a 3-2 victory. Marcus Rashford had missed one earlier.

The Red Devils still look like they’re getting back into the swing of things and Jose Mourinho’s Tottenham may consider this a good time to face them. Spurs had penalty controversy of their own as a late handball was awarded to Newcastle which resulted in a 1-1 draw. Tottenham took 23 shots in the match, with 12 on target. If Son’s hamstring injury keeps him out of GW4, Harry Kane will shoulder the responsibility of finding the net.

Liverpool looked excellent against Arsenal in their 3-1 win, despite another defensive mishap which lead to Arsenal taking the lead. The Reds went on to take 21 shots, with 12 coming from inside the box. This largely contributed to gaining the lead and closing with the victory.

Aston Villa will take on their biggest challenge of the season so far in the GW4 fixture against the champions. Villa have had a great start by registering 6 points out of 6 after taking apart Fulham at Craven Cottage to win 3-0. They did allow 11 shots in their box against bottom of the league and Liverpool are far more likely to make the most of chances, if allowed a similar level.

The captaincy choice for GW4 is another tough one. Based on the odds, Southampton’s striker Danny Ings is the most likely goalscorer of the Gameweek (57%) as he plays West Brom, who have conceded the most goals out of any Premier League team.

As Pierre Aubameyang is listed as a midfielder though, many will struggle to overlook the Arsenal front man. This is the obvious choice on paper but despite a poor start, Sheff Utd have conceded four goals, a lot fewer than the aforementioned West Brom.

Alternative options are Mohamed Salah and Raul Jimenez. Both will be looking to get back onto the score sheet in GW4 and have 56% and 52% chance of doing so, respectively. Jamie Vardy also deserves a shout out but the hip injury he picked up leaves him as a slight doubt.

Some managers may take a risk with Timo Werner who scored his first Chelsea goal against Tottenham midweek. No doubt there will be gleeful and regretful managers when it comes to the captain’s armband on Monday morning.