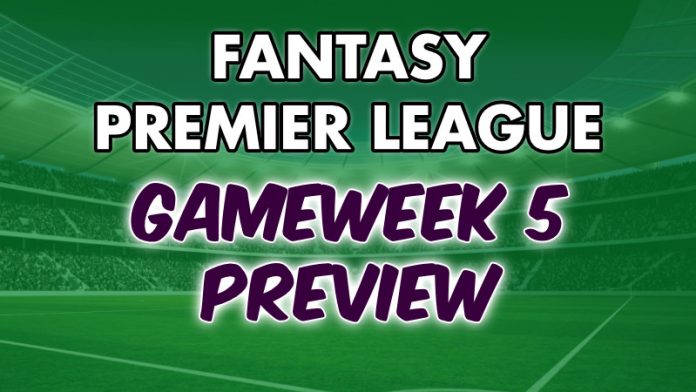 The Premier League returns after the first International Break of the season and as usual FPL managers can’t wait for the action to resume.

Gameweek 4 brought us another high goal scoring weekend, with some surprising and quite unbelievable results. This will have left plenty of FPL managers slamming the Wildcard button ahead of Gameweek 5.

As usual we look at each teams’ percentage chance of winning, the most likely goalscorers and any differential options worth noting.

The current league leaders, Everton, host the reigning champions, Liverpool, in one of the most interesting fixtures of Gameweek 5. The Merseyside Derby has added importance after Liverpool were dismantled by Aston Villa in the biggest shock of Gameweek 4, ending in a 7-2 loss. Liverpool allowed 13 shots in their box and 18 in total, after their defensive frailties were shown again.

Klopp’s side face the Premier League’s most in-form team, Everton, who have won all four opening games. The Toffees will be chomping at the bit to face up against Liverpool after their 4-2 victory against Brighton. Everton were clinical yet again, as they converted four out of their six shots on target. They did show some weakness in defence however, with more defensive/goalkeeping mistakes.

Chelsea took on Crystal Palace in Gameweek 4 and after an impressive performance, the Blues strolled to a 4-0 victory. Defensively Chelsea looked a lot more organised, with Thiago Silva leading the back line.

Ben Chilwell marked his first start with a goal and an assist. Naturally this has resulted in an influx of transfers in for the former Leicester man.

They only allowed four shots against them and zero shots on target, resulting in their first clean sheet of the season. Two more penalties were awarded to Chelsea and Jorginho converted both to cement his role as their number one spot-kick taker.

Southampton visit Stamford Bridge after their 2-0 victory against West Brom. Although The Saints weren’t too troubled by The Baggies, they look like they’re starting to find the form which they closed last season with. That’s two wins on the bounce and two clean sheets too. Chelsea are starting to become the threat many though they’d be and therefore may be a bridge too far Southampton. The biggest fantasy question will be whether Werner can get his first Premier League goal.

Man City seem to have struggled in the last two Gameweeks without having a striker on the pitch. City drew 1-1 with newly promoted Leeds in Gameweek 4 and despite having 23 shots in the match, The Citizens only managed two shots on target.

With Aguero and Jesus both expected to be out injured in Gameweek 5, it will be interesting to see whether City once again struggle putting the ball in the back of the net.

Gameweek 5 brings us another showdown between Pep Guardiola and his protégé turned rival manager, Mikel Arteta. After a tactical masterclass in their last meeting, Arteta’s Arsenal knocked Man City out of the FA Cup in the semi-final.

The Gunners picked up a win against Sheffield United in Gameweek 4 and will hope to use that momentum to upset City at The Etihad. Certainly easier said than done.

Last time out Newcastle earned a good win against the usually solid defensive side of Burnley. Newcastle looks far more creative going forward, as Allan Saint-Maximin returned from injury with a goal and an assist.

The Magpie’s forward and new striker, Callum Wilson, will look to continue how he started the before the international break. He already has four goals and an assist in this campaign.

Newcastle host a Manchester United side who are coming off a 6-1 loss to Tottenham in Gameweek 4. The heavy defeat has brought question marks over Man United’s manager, Ole Gunnar Solskjaer’s position and over the board’s lack of investment. The Red Devils faced 16 shots in their own box during their defeat against Spurs and now equal bottom of the league, Fulham’s, defensive record so far this season.

GW5 also brings us a bottom of the table clash as 19th and 20th face each other, with both sides on zero points. Sheffield have only scored one goal so far this season, finding the net in their 2-1 defeat against Arsenal in Gameweek 4.

New signing, Rhian Brewster, will be hoping to get his chance to lead the line as he doesn’t seem to have prolific competition for a starting position up front. Brewster couldn’t ask for a better chance to impress than against bottom of the league, Fulham.

Crystal Palace took a heavy 4-0 defeat at the hands of Chelsea in Gameweek 4. The Eagles looked blunt in attack as they didn’t manage any shots on target in the match and faced 17 shots and six on target in return.

Palace face Brighton this week, who also let in four goals in Gameweek 4. Despite the 4-2 loss, Brighton striker, Neal Maupay, is in top form as he netted his fourth goal of the season against Everton.

Tottenham are coming off the thrashing of fellow ‘Big Six’ rival, Manchester United. They beat them 6-1 at Old Trafford in what is already an iconic result.

Kane and Son teamed up again to produce another world class performance resulting in two goals and an assist each. Spurs took 22 shots in the match with eight on target and, ultimately, converting six.

Opponents West Ham also produced an impressive away performance as they won 3-0 at Leicester last time out. As well as looking dangerous in attack, The Hammers were tight at the back as they avoided any shots on target against them.

It was a first defeat of the season for third placed Leicester City in their 3-0 loss to West Ham in GW4. The Foxes struggled going forward as they didn’t manage any shots on target to trouble the West Ham keeper, although they are still the joint highest scorers in the league. Leicester have a chance to set the record straight when they play third placed Aston Villa.

Last season’s 17th placed side have exploded into the season with three wins from three games, including the hard to believe 7-2 victory against Liverpool. Villa were excellent in the game and picked apart the champions in clinical fashion with 11 shots on target and 13 in the oppositions box.

Ollie Watkins and Jack Grealish look like a dangerous duo as they registered five goals and four assists combined and that was just against Liverpool!

West Brom are coming off their third loss of the season against Southampton. They have conceded the highest amount of goals in the league (13) and similar to Fulham, without their fans boosting them in the ground, they look like the quality of the Premier League may be too much for them.

The Baggies face Burnley in Gameweek 5, who are yet to earn a point in the league after losing all of their opening fixtures. Burnley have had injury troubles in defence and the international break may have served them well to get players fit again.

The sooner they do, the sooner we could see the outstanding defensive record they produced last season. This will be needed if they’re to avoid getting dragged into an early relegation battle.

Leeds put on a strong performance to earn a point against the title chasing Manchester City. While they faced 23 shots, they only allowed two of those on target. Although they went down 1-0 in the first half, Leeds showed grit earning an eventual 1-1 draw.

Wolves meanwhile visit Elland Road after their 1-0 victory against bottom of the league, Fulham. Although Wolves came away with the win, they didn’t impress too much in the narrow victory against a side who have struggled so far.

The captaincy choice for Gameweek 5 is Harry Kane. Tottenham are scoring plenty of goals and he takes penalties in season which we are seeing plenty being awarded. As well as his three goals, Kane has six assists so far this season. Therefore if Tottenham score the chances are Kane will be involved.

Other captains to consider are Jamie Vardy and the FPL point machine that is Mo Salah. There are questions about Leicester following their 3-0 loss to West Ham and although Salah has started the season excellently, an away trip to Everton and a derby to boot is hardly ideal for a captain.