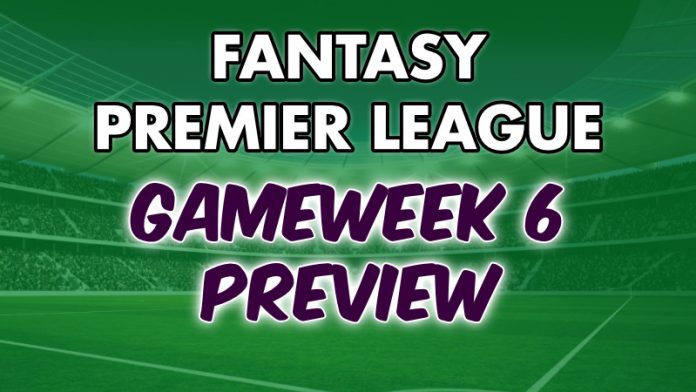 Plenty of Fantasy Premier League managers used their wildcard ahead of last time out, some bringing green arrows and some just bringing regret. There were more shocks and upsets but once again, there were plenty of goals which brought us more coveted FPL points.

We preview Gameweek 6 by looking at each teams’ chance of winning, who’s most likely to score and if there are any differential players flying under the radar.

After narrowly avoiding relegation in the 2019/20 season, Aston Villa are off to an absolute flyer this season as they won their fourth game in a row to keep up their 100% winning record. Their 1-0 victory against Leicester brought them their third clean sheet of the season and keeping their goals conceded tally to just two (the best in the league). Who would have ever predicted that at the beginning of the season!

In Gameweek 6 Villa face Leeds, who will be looking to bounce back after disappointment against Wolves. Bielsa’s side took nearly twice as many shots as their opponents. However they ultimately fell victim to a deflected goal, resulting in their 1-0 loss.

Man City grinded out a 1-0 win against Arsenal in the last gameweek, as Pep got the best of his protégé, Arteta, in what was more of a chess match between the two managers rather than a football match. We saw Sergio Aguero return from injury and get an hour’s worth of football under his belt. With the striker returning, we could start to see the goals flying in from Man City, as we did last season.

City head to West Ham in Gameweek 6, who provided one of the greatest comebacks in Premier League history as they came back from 3-0 down at half time to earn a 3-3 draw, courtesy of Manuel Lanzini screamer in the 94th minute. The Hammers looked creative in attack, as they took 11 shots in Tottenham’s box although the result was harsh on Spurs. They also hold victories over Wolves and Leicester this season.

Fulham picked up their first point of the season as they drew 1-1 with Sheffield United. This could have easily been a win for Scott Parker’s side, if it had been their talisman Aleksander Mitrovic’s day. The striker missed a penalty and squandered several other big chances to earn the win.

The Cottagers now host Crystal Palace. The Eagles settled for a point after letting in a late goal against Brighton last week. Palace faced 20 shots against Brighton and only managed one in return. If Mitrovic is given as many chances as this, his owners will hopeful he can make up for his blank against Sheff Utd.

It was a flurry of late goals which earned Manchester United the win against Newcastle, as they scored three goals in the last ten minutes to win 4-1. The Red Devils looked like they were on the way to another poor result, as Bruno Fernandes missed his first penalty in a Utd shirt. That changed though, as they produced 28 shots and 14 on target, including 16 in the oppositions box. This looked more like the high scoring Man United we saw post-lockdown.

Gameweek 6 brings us another ‘Big Six’ showdown as Man United host Chelsea. Lampard’s team showed more defensive faults as they drew 3-3 against Southampton after a 91st minute equaliser for the Saints. Fortunately for them Edouard Mendy returned against Sevilla. Elsewhere, Chelsea fans and FPL managers alike will have been delighted to see Werner get the goals he was overdue, hauling 16 points in the process.

Liverpool picked up a point in the Merseyside Derby last week against an impressive Everton. Liverpool put in a great performance and were maybe unlucky to come away with just a draw, as they took twice as many shots as their opponents (22 to 11) and took 15 from inside the box.

Liverpool unfortunately lost key defender, Virgil Van Dijk, early in the game following a horror tackle from Pickford. Unfortunately it looks like he’ll be out for a long time. Without his commanding presence and ability in the air, they conceded two headed goals to settle for a 2-2 draw.

Sheffield United visit Anfield following their first point of the season against Fulham. The Blades will hope to exploit Liverpool’s makeshift defensive which has both Alisson and van Dijk absent.

On the Blue side of Merseyside, we saw another strong performance from Everton against local rivals Liverpool. Everton battled to the aforementioned 2-2 draw against the champions to keep hold of the 1st place in the league and continue their unbeaten season. Despite not taking as many shots as their opponents, Everton were clinical yet again with the league’s joint top goalscorer, Dominic Calvert-Lewin, finding the net for the seventh time this campaign.

Everton now move their attention to Southampton who capitalised on Chelsea’s individual errors to claim a point in the 3-3 draw. The Saints went toe-to-toe with Lampard’s side and deserved a point as they showed resilience to come back from 2-0 down in the first half.

Wolves are starting to show that solid defence, which we’re all used to seeing, as they picked up their second clean sheet in a row in their 1-0 win away at Leeds. Picking up goals appears to be the problem for Wolves as this was just their second goal in their last three Premier League games, despite facing newly promoted sides Leeds and Fulham.

Newcastle take on Wolves this week and will hope to bounce back after they finally succumbed to Man Utd’s attack. The Magpie’s shot stopper, Karl Darlow, made eight saves in the game and looked like he would earn the draw before picking up a knock. Darlow is now a doubt for Gameweek 6, which could play into low scoring Wolves’s hands.

In Gameweek 6 Arsenal will host Leicester as both teams look to bounce back after 1-0 defeats last week. The Gunners boss, Arteta, was tactically beaten by his teacher, Pep Guardiola, in their 1-0 loss. They had a few good chances but despite a good showing were second best.

Leicester had a similar problem as they lost to Villa without their talismanic striker, Jamie Vardy. The Foxes are hoping Vardy will return from injury to face Arsenal, as the striker has found the back of the net four times in the last five meetings between the sides.

Brighton picked up a point with a 90th minute equaliser against Crystal Palace. Few could argue it wasn’t deserved. Brighton’s defence looked solid again as they only allowed one shot at their goal. Unfortunately this was the penalty, which Palace scored from. Getting on the scoresheet themselves appeared to be The Seagull’s problem as they took 20 shots but only managed three on target.

Brighton will host West Brom in GW6 which could boost their chances of hitting the net. The Baggies have conceded the joint highest amount of goals, 13, however they did earn a clean sheet in their 0-0 draw with Burnley in their last game. Brighton are without defender Lewis Dunk, after his red card, so their defence may be weakened.

By the 16th minute, we all thought we were about to see another team ripped apart at the hands of Harry Kane and Son Heung-Min as Tottenham were 3-0 up against West Ham. It was a great second half performance from The Hammers. However, the chances stopped coming from Mourinho’s men and they were left gobsmacked as Lanzini’s 94th minute effort found the top bins to complete the 3-3 comeback and snatch two points off Tottenham.

Despite the upset, Kane and Son were outstanding again as they picked up 29 FPL points between them. We also saw the Gareth Bale re-introduced to the side to get some minutes following injury.

Gameweek 6 sees the league’s leading goalscorers head to Burnley, who picked up their first point in the first goalless draw of the Premier League season against West Brom. Burnley had the better of the chances as they faced the joint worse defence in the league but couldn’t find that winning goal. Tottenham will be hoping to bounce back and Jose could unleash Gareth Bale to complete a fearsome front three. The Real Madrid man started in the Europa League and is still regaining his full sharpness, though, a word of warning to potential owners.

Salah is the most likely goalscorer in #FPL Gameweek 6.

Who’s getting your captain’s armband? pic.twitter.com/tCK9CXmemn

Our captaincy choice for Gameweek 6 is Mo Salah. After being brought off early in their midweek Champions League win, Salah should be fresh and raring to go. The Egyptian forward has six goals and one assist to his name so far this season. With three goals coming from his last two games, he has a 60% chance of adding to that.

Other captains to consider are Harry Kane and Son Heung-Min. The two have been outstanding so far as they have lead the Tottenham attack and picked up 13 goals and nine assists combined. Nevertheless, Salah’s 60% chance of scoring from midfield is something we simply cannot ignore.