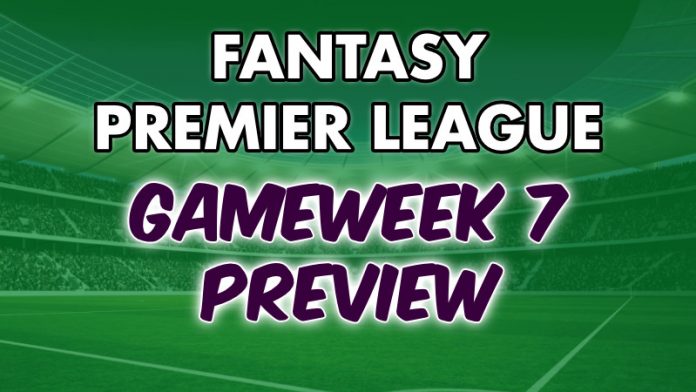 We faced more twists and turns in what is becoming an extremely unpredictable Fantasy Premier League season. The goals dried up a little and we’re starting to see more clean sheets.

Investing in those defenders with great Clean Sheet percentages could be the way to boost your Fantasy Premier League team up the ranks. Although we all know that could well change once again.

In this Gameweek 7 preview we check out each teams’ percentage chance of winning, the most likely goalscorers and any notable differential options.

Wolves dropped two points late on in last week’s round of fixtures, as Jacob Murphy’s equaliser for Newcastle gave Wolves manager, Nuno Espirito Santo, more headaches around his side’s attacking form. The reliance on Raul Jimenez is becoming more and more apparent each week. Wolves are 16th in the league’s goalscoring ranks with only six goals. Four of these have come from striker, Jimenez.

In Gameweek 7 Crystal Palace visit Wolves. The two sides are level on points but The Eagles are coming off an away victory against Fulham. Palace’s key player, Wilfried Zaha, put in a fantastic performance again as he netted his fifth goal of the season and picked up an assist too. Roy Hodgson’s side were unlucky not to have kept a clean sheet as they only faced three shots on target. It took a moment of magic from Tom Cairney to get the equaliser.

Last week brought more disappointment for Manchester City manager, Pep Guardiola, as his side dropped more points in their title race in a 1-1 draw with West Ham. City struggled to create chances in the game before Kevin De Bruyne was introduced, following his injury. The PFA Player of the Year will be vital for The Citizens, as they look to regain their form. With another possible injury to striker Sergio Aguero, we could see De Bruyne unleashed in a more advanced role in Gameweek 7.

Man City face Sheffield United this week, who are continuing to struggle in their second season back in the Premier League. The Blades lost from a winning position against champions, Liverpool, last week. Scoring is still the issue for Sheffield as they managed just two shots on target out of 13 attempts. This has left them with the joint worst goalscoring record in the league so far. The 2-1 defeat was their fifth of the season and leaves them in 19th position, on just one point.

Chelsea took part in a very tame encounter with Manchester United last week, as the cagey affair resulted in both teams taking a point in the goalless draw. The Blues did have strong claims for a penalty on Azpilicueta which was not awarded. However, that was arguably the highlight of Chelsea’s attack in the game. They took just six shots with only one of them hitting the target. Chelsea did seem to prioritise the clean sheet over pushing for a goal late on and they are yet to concede with new keeper, Edouard Mendy, in goal.

Chelsea will play Burnley this week who are still yet to pick up their first win of the season and sit in the bottom three, with one point. Burnley put in a much better performance against Tottenham last week and were unfortunate to lose as they debatably had the better chances to go ahead before letting in the only goal of the game in their 1-0 loss.

Liverpool got back to winning ways in their match with Sheffield United, as they came back from being 1-0 down following an early penalty against them. Although they only allowed two shots on target, even without the injured Virgil Van Dijk, the penalty was the result of another defensive error. The Reds continued to look dangerous in attack and Mo Salah was unlucky not to pick up a goal against a spirited Sheffield.

West Ham are coming off the back of a strong performance against Manchester City as they picked up a draw. They will hope to provide another upset for a title challenger as they visit Anfield in Gameweek 7. The Hammers worked hard to earn the point as they extend their unbeaten run to four games in the Premier League. However, West Ham have struggled in their previous trips to Liverpool as they conceded 11 goals against them in the last three, with Salah and Mane scoring in all three.

Aston Villa were humbled in their Friday night fixture against Leeds United, as they lost their 100% winning record by falling to a 3-0 defeat. Villa did have their chances to get on the scoresheet but they couldn’t match the relentless attacking performance from Leeds. After facing 27 shots, Villa’s defence were perhaps lucky to only concede three.

Southampton were on the other side of a humbling last weekend as they took on the league leaders, Everton, and beat them 2-0 at St. Mary’s. Although they faced an injury-hit side, The Saints will be proud of their performance, especially in defence as they stifled Everton’s creativity and only allowed two shots on target.

Everton will be looking to bounce back after their 2-0 defeat to Southampton ended their five game unbeaten run. The Toffees went into the game with the second best goalscoring record in the league. However, with some key players missing and James Rodriguez still shaking off a knock, they struggled to create chances and only took two shots at Southampton’s goal.

Despite the defeat, Everton still sit top of the league as they head to Newcastle in Gameweek 7. Newcastle salvaged a point against Wolves thanks to a late goal from Jacob Murphy. The Magpies didn’t look threatening in attack though, and allowed 16 shots against them in the match. If Everton can turn their creative tap back on, clinical striker Dominic Calvert-Lewin could punish their hosts.

Manchester United settled for a point at home against a stubborn Chelsea in their 0-0 draw. United looked hungrier for the win than their opponents, as they took more than twice as many shots as Chelsea. New signing Edinson Cavani made his debut and almost marked it with a fine finish. The striker could provide the attacking focal point which they’ve been missing in the absence of the suspended Anthony Martial. The both will likely eat into each other’s minutes as the season progresses.

In Gameweek 7, we see a Premier League classic fixture as Arsenal taken on The Red Devils at Old Trafford. Arsenal were firing blanks last week as they lost 1-0 to Leicester despite having most of the ball and taking 12 shots. However, only four of these were on target and none of them really tested Leicester keeper, Kasper Schmeichel.

Brighton fans were left disappointed as their side couldn’t get over the line against West Brom. They conceded late on to continue their run of four games without a win. The Seagulls were on top for the start of the game but seemed to run out of steam as the chances dried up as they could only manage one shot on target in the second half.

Brighton take a trip to Tottenham in Gameweek 7. Tottenham pushed themselves up to fifth place in the league after grinding out a win against Burnley. Spurs Manager, Jose Mourinho, predicted the game would be tough against a side who are desperate for a win and have the ability to block any Premier League team from scoring. As Mourinho predicted, his side were not as exciting in attack and had to focus more on their defence as Burnley took more attempts on goal than them including one which had to be cleared off the line by Harry Kane. The striker combined yet again with Son Heung-Min to allow the latter to finish the only goal of the game in the 1-0 win.

Bottom of the league, Fulham fell to their fifth defeat of the season against Crystal Palace last week. Despite the efforts of Ademola Lookman, The Cottages struggled to look threatening again as they only managed three shots on target out of 16 attempts.

Fulham host West Brom in Gameweek 7 who earned a draw away at Brighton. The Baggies responded positively after going 1-0 down, with Karlan Grant scoring his first goal for the club. Newly promoted West Brom and Fulham didn’t have the most exciting encounters with each other last season as both games ended in a draw and only two goals were scored.

Leicester took part in a solid ‘smash and grab’ performance as they pinched a 1-0 victory away at Arsenal following the late goal of star striker, Jamie Vardy. The Foxes barely threatened their opponents’ goal during the game as they only took six shots and only two on target. Vardy returned from injury and played just 28 minutes but that was all he needed to claim the three points and his sixth goal of the season.

Leeds United host Leicester this week following a fantastic performance against high flying Aston Villa. They ended their 100% start to the season with a 3-0 victory. As we’ve seen before, Leeds were relentless in attack as they took 27 shots during the game as Patrick Bamford picked up a hattrick. They now sit two points behind fourth-placed Leicester and will hope to continue the exciting impression they’ve given us so far.

Our captaincy choice for Gameweek 7 is Harry Kane. The Tottenham striker picked up his eighth assist of the season in Gameweek 6 to go along with his five goals so far. Spurs face Brighton at home this week and we stand by the premise that if Tottenham find the back of the net, it’s very likely Kane will be involved.

Other captains to consider are Mo Salah and Son Heung-Min. Salah was very unlucky not to get on the scoresheet last week and any other day, he’d have hit a double figure Fantasy Premier League return. The Egyptian forward comes in as the most likely player to score this week, with a 57% chance, which is why it’s difficult go against him. We certainly won’t begrudge anyone that does.

Meanwhile, Son picked up his eighth goal in the campaign last week, making him the league’s top scorer and the player with the most points in Fantasy Premier League.