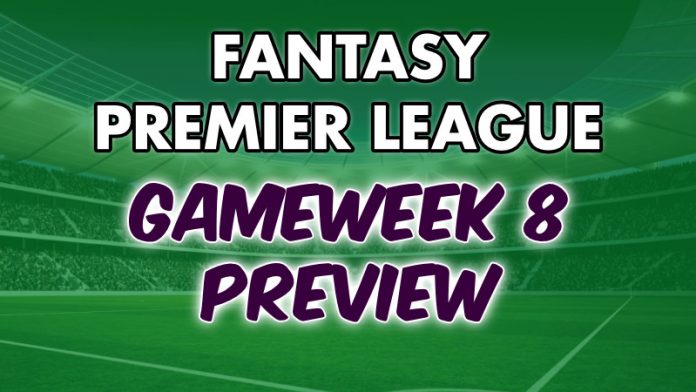 We are now seven games into the FPL season but some of the Premier League teams don’t look like they’ve found their rhythm just yet.

The upcoming International Break, which follows Gameweek 8, will be of benefit to these team. It could also be a time for Fantasy Premier League managers to reset and Wildcard too.

To help your team selection decisions, we look at each Premier League teams’ percentage chance of winning, the most likely goalscorers and any differential options worth taking a punt on.

VAR was a key feature of Brighton’s previous game, as they lost 2-1 to an exciting Tottenham Hotspur. Brighton were debatably lucky to get on the scoresheet as Lamptey’s first senior goal could have been ruled out due to a foul in the build-up. The Seagull’s boss, Graham Potter, advised it was ‘tactical reasons’ behind his decision to leave his top goalscorer, Neal Maupay, out of the squad. If Brighton play without a recognised striker in Gameweek 8, they may need luck on their side again to find the back of the net.

In Gameweek 8, bottom of the league Burnley head to Brighton following their fifth defeat last week against Chelsea. With just one point so far, The Claret’s are really struggling at both ends of the pitch. Against Chelsea, they didn’t manage any shots on target throughout the game and faced nine at their own goal in the 3-0 defeat at home.

Despite a late attempted comeback, Southampton claimed all three points last week against Aston Villa to extend their unbeaten run to five. The Saints are scoring plenty of goals this season and their stats look impressive too as they took 14 shots inside their oppositions box with 19 in total and ten of these hitting the target.

Southampton host Newcastle in Gameweek 8, who earned their first win in three matches against Everton last week. In a slow burner of a game, Newcastle proved to be more clinical as the sides had the same number of shots on target but The Magpies’ striker Callum Wilson converted two of his chances to make the difference in the 2-1 win.

Everton noticeably missed key players, James Rodriguez, Richarlison and Luca Digne on their 2-1 defeat to Newcastle. The Toffees missed the chance to go top of the league again as they lost for a second week in a row. They lacked the creativity of the three aforementioned players but may get two of them back for Gameweek 8 where they will be desperate to get back to winning ways.

Manchester United face Everton at Goodison Park this week and will look to bounce-back after a 1-0 defeat to Arsenal. After a fairly tepid affair, United fans were left a little frustrated as players were deployed out of position and rather cautious tactics played into the hands of their opponents. With that being said, The Red Devils are much better on the road as they have won both of their away fixtures so far and on top of that focal point striker, Anthony Martial, returns from suspension to give United an attacking boost.

During the previous Gameweek, Crystal Palace came up against the solid defence of Wolverhampton Wanderers and fell to a 2-0 defeat. Palace’s forwards lead a charge in the second half but ultimately came up short as they couldn’t break through the Wolves defence. The Eagles only managed two shots on target during the game.

In Gameweek 8 Leeds United visit Crystal Palace as the visitors too, aim to rebuild after defeat. Leeds took a heavy 4-1 beating against Leicester City last week as defensive mistakes and missed chances in attack contributed towards a second home defeat in a row. Although their home form doesn’t look great, Bielsa’s side have won their last two away fixtures.

Chelsea’s previous fixture gave us sight of Frank Lampard’s high-profile signings starting to gel. The Blues picked up a 3-0 win away at Burnley where new forward Hakim Ziyech showed the quality to match his reputation as he picked up a goal and an assist. Defensively, Chelsea were strong too as they didn’t allow any shots on target to earn the clean sheet. New goalkeeper Edouard Mendy is yet to concede a Premier League goal since joining in the summer.

Sheffield United take a trip to Stamford Bridge this week as The Blades sit in 19th place with just one point from the first seven games. Man City handed them their latest defeat and once again, Sheffield found it hard to find the target. Chris Wilder’s men found hit just one shot on target in the game.

West Ham put in a real shift again against a title contender but came up short to lose 2-1 to the champions, Liverpool, last week. The Hammers were without key player Michail Antonio, who is out with injury with an unknown return date. Without the forward, West Ham’s shot conversion rate could suffer.

Although West Ham will be without Antonio, fortunately they are playing one of the worst defences in the league this week. The Hammers will face up against Fulham at home. However, Fulham did pick up their first win of the season against West Brom last week and reduced the amount of chances on target they gave away this time round as their opponents only had one shot at The Cottagers’ goal.

West Bromich Albion fell into the bottom three after losing 2-0 to fellow newly promoted side, Fulham. Improvements are much needed in attack for The Baggies as they only managed one shot on target. There were notable missed chances from Albion’s attack, but their conversion rate must improve.

In Gameweek 8 West Brom are up against Tottenham Hotspur. Since the opening day defeat to Everton, Tottenham have been unbeaten in the Premier League and now sit in third place. Spurs dug deep to earn a 2-1 win against Brighton last week as returning hero, Gareth Bale, scored his first goal after rejoining, to win the game. If we get to see Bale starting in this game, alongside Harry Kane and Son Heung-Min, West Brom’s goalkeeper could have a very busy afternoon.

Leicester switched on the style against Leeds United in their last game as they pushed themselves up to second in the Premier League with a 4-1 win. Jamie Vardy put in a man of the match performance, picking up a goal and two assists. The Foxes were dangerous going forward as they took ten shots, got eight of these on target and four of them found the net.

This time round, Leicester will host Wolverhampton Wanderers in what is expected to be a very even fixture between two sides aiming for a top six finish. Wolves appear to have found their form as they have gone four games unbeaten in the league and have conceded just one goal in the process.

Gameweek 8 brings us the most anticipated fixture of the season. We will see the two most likely title challengers going head to head, as Manchester City face the reigning champions, Liverpool, at their home ground. City grinded out a 1-0 win against Sheffield United last week where they looked stronger in defence with centre back Aymeric Laporte returning to the side and picking up a clean sheet.

The visitors, Liverpool, picked up a hard earned win too last week against West Ham United. The late goal from substitute, Diogo Jota, made it 2-1 and proved to be the winner. The forwards form has raised question marks over the starting position of Roberto Firmino meaning we could see a little unrest in Liverpool’s front line.

Both sides have injury issues so team selections and tactics could be key in terms of which side comes away happier. This could result in a fairly cagey showdown between two high quality sides.

Arsenal took part in a rather dull fixture last week but still came away with a 1-0 win against their ‘Big Six’ rivals, Manchester United. Both sides only managed two shots on target but it seemed The Gunners’ manager, Mikel Arteta, displayed another tactical masterclass to earn the win.

This week Aston Villa face Arsenal and Villa’s 100% record seems a long time ago as they lost for the second time in a row against Southampton. The Villans were 4-0 down before Jack Grealish lead the attempted comeback to bring the score to 3-4. This was too little too late though as they couldn’t find the equaliser despite taking 19 shots and getting ten on target.

Aubameyang is Gameweek 8’s most likely goalscorer but we have a feeling most FPL managers will be going with Kane for the captaincy… pic.twitter.com/Os72oCEHDe

Once again, our captaincy choice for this week is Harry Kane. The striker is now the joint top point scorer on Fantasy Premier League after picking up his sixth goal of the season last week. The striker still has the highest amount of assists from any player in the league and with Gareth Bale joining, the goals scored for Tottenham are likely to increase.

Other captains to consider are Son Heung-Min and Timo Werner. The Tottenham forward, Son, could have a field day against newly promoted West Brom to keep him top of the league’s top goalscorer charts. Werner scored his third goal of the season last week and appears to be settling into the league. The Chelsea striker is certainly one to keep tabs on, as the rest of their new signings settle in too.