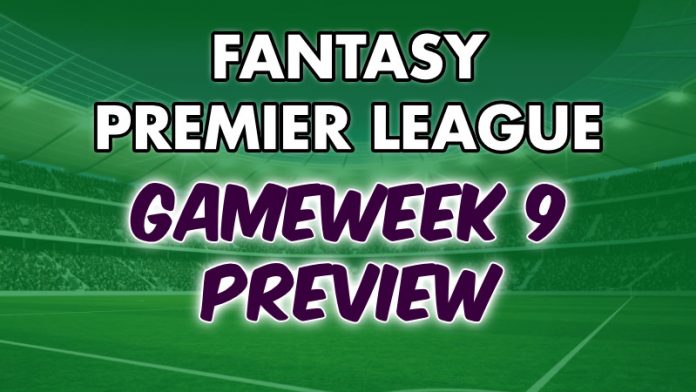 The final International Break of 2020 has come to an end and we welcome back Fantasy Premier League for Gameweek 9. Although managers will be eagerly anticipating the return of English football, there will be plenty who are dreading looking at their current FPL squad.

With a number of injury concerns and self-isolating players, this is looking to be an extremely testing and important week to get those transfer decisions right. Especially for those who have pushed the Wildcard button.

To help your team selection decisions, we look at each Premier League teams’ percentage chance of winning, the most likely goal scorers and any differential options worth taking a punt on.

Newcastle lost their momentum in the last Gameweek as they were beaten 2-0 by Southampton. The Magpies were off the pace defensively as they allowed their opponents 15 shots with nine of these coming from inside the box. They were wasteful going forward as they were unable to create any chances. Callum Wilson didn’t manage any shots in the whole match.

In Gameweek 9, Newcastle host Chelsea who are in solid form as they look to extend their unbeaten run to seven Premier League matches. The Blues put on an impressive display to sweep aside Sheffield United, 4-1, in their previous game. They are really starting to click in attack, registering 20 shots in the game with Hakim Ziyech running the show once again. The Moroccan winger has contributed to four goals in the past two Premier League games.

Aston Villa upset another Top Six hopeful in the last Gameweek. This time it was Arsenal who struggled to contain Villa’s direct and high energy Midfield trio and front three. After back to back defeats, The Villains were in top form again. Captain, Jack Grealish, looked unstoppable as he picked up his sixth assist of the season and was unlucky not to have registered anything else.

Brighton visit Villa in Gameweek 9 after their dull Friday Night fixture against Burnley, ended in a goalless draw. Despite Neal Maupay being back in the team, The Seagulls once again struggled to find the back of the net as they took 19 shots but only managed to get three on target. Their opponents this week, Aston Villa, will be eyeing up a clean sheet already.

Gameweek 9 brings us an exciting showdown between two heavyweight managers in Jose Mourinho and Pep Guardiola. Mourinho’s Tottenham Hotspur sit eight places above Pep’s Man City in the Premier League and they are the most in form team in the league. A late winner from Talisman, Harry Kane, earned them a 1-0 win against West Brom in the last Gameweek.

Man City were frustrated to only come away with a point in their game against Liverpool as the high-quality showdown ended 1-1. City’s PFA Player of the Year, Kevin De Bruyne, missed his first penalty in six which could have claimed win. As a result, Pep will be more desperate for the win in this fixture against Spurs, which could play into his counterpart’s tactical hands.

On the positive side for Pep, the two manager’s head to head record is in the Spaniard’s favour as he has beaten Jose Mourinho’s side 11 times, draw six and lost six.

Going in to Gameweek 8, the pressure was well and truly on for Manchester United manager, Ole Gunnar Solskjaer. However, the rumours that he was facing the sack were eased as Bruno Fernandes’ brace contributed to their 3-1 win against Everton. It was a good performance in the end from United as they came back from 1-0 down and their defence tightened up as Everton’s goal was the only shot they had on target.

In Gameweek 9, The Red Devils will hope to wipe out any negative talk about their home form as they face bottom three side, West Bromwich Albion. Although United are yet to win at Old Trafford in this season’s Premier League, their Gameweek 9 visitors may not cause them too many problems. West Brom have earned just one point on the road out of four games and conceded 12 goals in the process. The Baggies lost their last Premier League match too, 1-0 at home to Tottenham.

Fulham ended the last Gameweek with more disappointment and frustration. Their match against West Ham looked certain to end goalless before an exciting injury-time finish. This saw a goal for The Hammers and a badly missed penalty as the last kick of the game, from Fulham’s Ademola Lookman. This was The Cottagers’ sixth loss out of eight games.

Everton head to Craven Cottage this week and are still waiting for their bounce back game following three defeats in a row. The International break couldn’t have come at a better time for the Toffees as it gave their squad a much-needed rest and meaning they can welcome back several key players to the starting XI. The Toffees will be eyeing up this fixture for a big win to get themselves back on track.

Bottom of the league, Sheffield United, took another battering in the last Gameweek as Chelsea ran riot in the 4-1 loss for The Blades. Sheffield were hopeful of turning a corner in their season early in the game, as they went 1-0 up in the first ten minutes. However, after allowing their high-quality opponents 20 shots in game, there was only one likely outcome which resulted in Sheffield’s seventh defeat of the season.

West Ham had luck on their side last week as they looked like they would only get a draw in a very winnable game against Fulham. This was before an injury-time goal from West Ham’s Tomas Soucek and a missed penalty from Fulham resulted in three points for The Hammers. Manager, David Moyes, will be hoping Michail Antonio can return from injury in time for Gameweek 9, as they’ve shown they may struggle to find the net without him.

Leeds United’s exciting attacking style of play has started to show the problems it can cause at this level, as they conceded four goals for the second week in a row. Crystal Palace took the 4-1 win and Leeds now hold the record for the Premier League’s worst defence so far.

Another team coming back who are coming back from disappointment are Arsenal, who are facing up against Leeds this week. The Gunners were taken apart at home against Aston Villa and as much as they struggled in defence, their attack wasn’t much better too. Arsenal were wasteful with their chances as they took 13 shots but only managed two on target and none of them found the net.

In the last Gameweek, Liverpool managed to grind out a 1-1 draw against fellow title contenders, Manchester City. The International break looked like it couldn’t have been timed better as Liverpool were hit with several injuries before, especially in defence. However, the International fixtures look to have caused even more damage as Liverpool’s usual back four could all be out injured, in addition to Mo Salah and Jordan Henderson.

Leicester City will be licking their lips following the news of Liverpool’s absentees. They sit top of the Premier League after their 1-0 win against Wolves before the break. Despite this, The Foxes also have an injury-hit defence so we could be in for a high scoring game, if both attacks are fit and well.

Crystal Palace cruised to a 4-1 win against Leeds United last time round. The Eagles converted three out of their six shots on target in the game, with one other coming from a Leeds own goal.

Palace are up against Burnley this week, who managed to pick up a clean sheet as they drew 0-0 with Brighton in the last Gameweek. Burnley’s defensive partnership, Ben Mee and James Tarkowski, were reunited following injuries and they provided the much-needed security at the back for The Clarets. Scoring is still the issue however, as Burnley have now gone four games without a goal.

Wolverhampton Wanderers’ up and down start to the season continued as they were beaten by, now top of the league, Leicester City 1-0 in their last game. Creativity in attack appears to be the problem for Wolves as they only managed two shots on target in the game. Captain and key centre back, Conor Coady, picked up an injury during his time with the England squad. If he’s still out this weekend, it could look promising for their Gameweek 9 opponents.

It will be Southampton who face Wolves this week and The Saints didn’t seem to have much trouble in their last game without injured striker Danny Ings. They managed 15 shots in their 2-0 win against Newcastle, with nine of these coming from inside the box. Theo Walcott stood out in his role behind goalscorer, Che Adams, which earned him an assist. Southampton are now six games unbeaten in the Premier League.

Our Gameweek 9 captaincy choice is Bruno Fernandes. The Manchester United midfielder is coming off the back of two goals and an assist in his last game. His side will be aiming for a high scoring win against Premier League minnows West Brom and, as it is always worth noting, Fernandes is on penalties.

Other captains to consider are Dominic Calvert-Lewin and Timo Werner. The Chelsea striker, Werner is starting to look consistent and is getting more opportunities to score with new teammate Hakim Ziyech hitting the ground running. Everton striker, Calvert-Lewin, is even more likely to be in the goals again as his favoured attacking partner, Richarlison, returns from suspension.

Who are you captaining in Gameweek 9? 🤔 pic.twitter.com/tIMhamDwS2