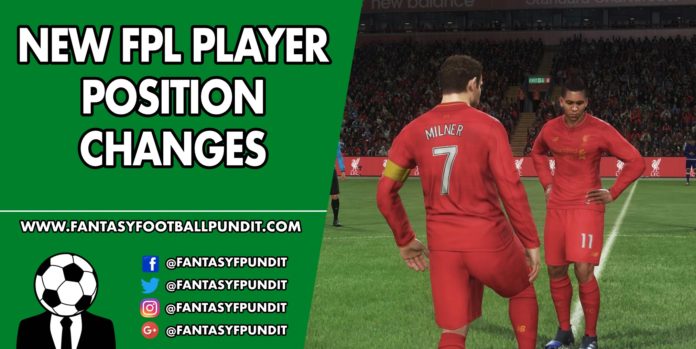 The stand out FPL position change this season is James Milner switching from a midfielder to a defender. Had he been listed as a defender last season he would have scored 182 points. (Bonus remaining the same). This would have actually put him at the top of the FPL defender scoring charts. Naturally a lot of Milner’s value comes from him being Liverpool’s penalty taker. It is notable he scored a penalty in a friendly against Tranmere yesterday.

Bournemouth’s top scorer last season, Joshua King, proved to be the best value FPL player last season being listed as a midfielder for £5.5m. Unsurprisingly he is now listed as forward and has a big price increase to £7.5m. In his new position his 16 goals and 2 assists would have converted to 153 points. That is 25 less than his actual 178 total. Once again this is assuming bonus point totals remained the same however.

Played as a central striker throughout last season, Firmino has received similar treatment to King being changed from a midfielder to a forward. If his bonus points had stayed the same between both positions he would have got 22 points less, 158. Klopp looks unlikely to include Firmino out wide this season and will face competition from Daniel Sturridge and Divock Origi up front.

The Chelsea wing-back would have been a popular pick last season. However, most weren’t able to do so because the loss of points in being a midfielder was too inefficient. That has changed this season though as Moses is rightfully listed as a defender. If he was a defender last season he would have scored 159 points. He may well of got more bonus points also so in actuality 159 may be a conservative estimate.