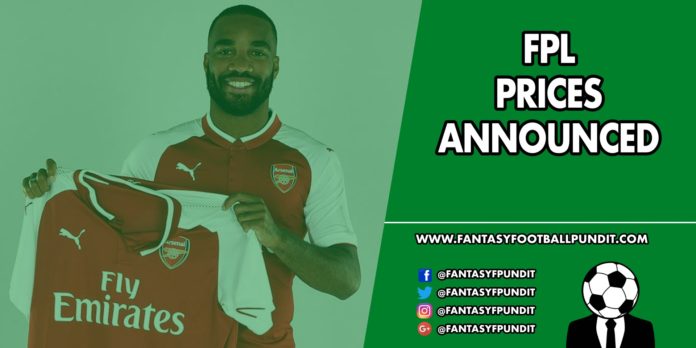 Fantasy Premier League have been revealing FPL player prices throughout the last couple of days. As of writing 9 player’s prices have been shared. These 9 are players that are likely to be featured in many teams also. We discuss the value of each of these FPL player prices below in the order they were announced. Update: 20 player’s FPL prices have now been revealed – one from each Premier League club. We now await the launch of this season’s FPL!

If you invested in McAuley from Day 1 last season you would have been very pleased with his FPL returns. Despite his price increasing £0.5m he will be picked by a lot of FPL managers at £5.0m. West Brom’s opening fixtures will only add to his pick percentage.

Capoue started last season with 44 points in the first 5 Gameweeks. He finished the season with 131 points in total. His price increase of £1.0m is the minimum we could expect. At £5.5m we expect to see him picked by a lot of FPL managers.

£7.0m for a player that finished 21st in the midfield FPL scoring ranks seems reasonable. This is just a £0.5m increase from what he started last season on.

Alli is a price reveal that has been eagerly anticipated. Despite scoring the second highest points with a total of 225 he has somewhat shockingly been priced under £10.0m. There is little doubt he will be a very popular pick at this price. Furthermore, this may have implications of Harry Kane’s pick percentage.

Llorente’s 146 points lasts season were undoubtedly going to get him a price rise this season. Llorente’s pick percentage could depend on whether Gylfi Sigurdsson is still at Swansea at the beginning of the season.

Some FPL managers might have thought Allen’s respectable 118 points would have got him a greater price increase. That isn’t the case and at £5.5m there will be some that opt for Allen as a differential pick.

Redmond’s initial price tag of £6.0m proved to be a good investment returning 126 points. His points came sporadically and if he can become more consistent his new price of £6.5m will result in a lot of picks. It should be noted toward the back end of last season he faced stiff competition from James Ward-Prowse and Sofiane Boufal for a starting position.

Despite being the world’s most expensive player Pogba has actually had a decrease from his £8.5m price tag last year. His FPL 2017/18 price of £8.0m will garner interest from many FPL managers who believe he under performed in his return season to Old Trafford.

Sane’s FPL price has increased to £8.5m from last year’s £7.5m. This is a relatively big increase but is still provides excellent value. Sane scored more than 75% of his 105 points in the second half of last season.

Everton’s opening fixtures will deter many FPL managers from picking Everton players. However, Klaassen did score 14 league goals for Ajax last season. His price of £7.5m may result in some FPL managers picking him as a differential choice.

Arsenal’s new record signing has been given plenty of FPL respect with a fairly hefty price of £10.5m. Lacazette’s 100 Ligue 1 goals may justify this price for some but plenty will look at it with caution as goals in European Leagues don’t always translate to Premier League goals. We believe most FPL managers will consider this price too high to take the risk. Having said that if Lacazette does start the season on fire he may become one of the must have players at £10.5m.

The most important part of this price is that King is listed as a forward this season. Our recent Twitter poll stated that 63% of you thought this would be the case. Listed as a forward, King’s price tag of £7.5m is probably a little too steep. The arrival of Jermain Defoe, combined with the fact he may no longer be on penalties, might result in a low pick percentage for King to begin the season.

Knockaert provided 15 league goals on Brighton’s way to automatic promotion. He also contributed 8 assists. It is very unlikely he will replicate this total in the Premier League but at a fair £6.0m there will be more than a few FPL managers that take the punt on Knockaert.

Burnley’s Tom Heaton topped the FPL scoring charts for goalkeepers last season with 149 points. He started last season £4.5m so a £0.5m increase was the least we could expect. Defensively Burnley had an excellent season and with the exit of Michael Keane it is perhaps unlikely they will replicate that to the same degree. Whilst Heaton probably won’t provide the same points return as last season he will likely be picked up by many FPL managers for £5.0m.

At £7.0m Fabregas may prove to be a steal providing the circumstances are correct. Toward the back end of last season he did start more games than not, scoring 37 points in the last 6 Gameweeks. With those returns he would be bargain at £7.0m. The question remains however how many starts will Fabregas get with Kante and Matic both vying for central midfield roles also.

Benteke had a sporadic year in terms of FPL points last season. He started last season at £7.5m so a £0.5m increase for the 9th best performing striker seems reasonable. £8.0m may just be a little too much for many FPL managers to take the risk on though. It will be interesting to see how popular Benteke is at this price with the threatening Wilfried Zaha and Andros Townsend behind him.

Huddersfield’s new signing Ince provided similar returns to Anthony Knockaert and is appropriately also priced at £6.0m. Having scored 13 goals with 6 assists he will probably have a similar pick percentage to Knockaert.

Despite Hull having a poor season, Maguire did put in some decent performances. These performances evidently earned him a transfer to Leicester. Last year he started the season at £4.5m so his £5.0m price tag seems correct. He will almost certainly be starting for Leicester so the question for FPL managers will be the likelihood of Leicester being able to keep clean sheets.

The initial reaction from the FPL community is that Salah’s £9.0m price is too expensive. The assumption is if Salah is £9.0m then Philippe Coutinho and Sadio Mane will be at least £10.0m. We disagree that Salah is too expensive however. He scored a very impressive 15 goals last season alongside 11 assists. If he can continue these returns in the Premier League he will be one of the highest scoring midfielders, which at £9.0m is a bargain.