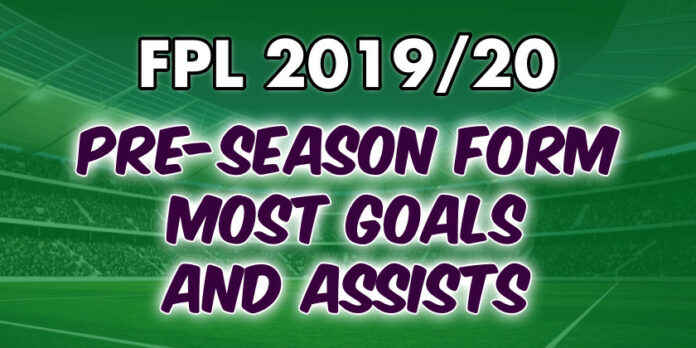 Picking players for your team can be stressful. Do you pick players based on how nailed they are? Do you pick them based on historical points? Or by the prettiest looking kits? Maybe you could look at easy fixtures runs to start?

The Burnley striker blew the rest of the competition for the pre-season golden boot out of the water.

Naturally, he is in excellent form and is a solid pick from the start this year. We fully expect Wood and his strike partner Ashley Barnes to hit the ground running this year. 9 goals in preseason means Wood is the most in form man going into the 2019/20 season and at only £6.5m he is definitely worth the gamble.

Is Ross Barkley Back?

The former Everton man had great stats during preseason but more importantly some much needed minutes while playing some lovely football.

Chelsea’s midfield does look like a slight minefield at present, and with Man Utd away being the first fixture the safest route here is to wait and see. With a TSB% of only 7.6% he could be a great differential pick.

Can You Ignore Raheem Sterling?

Sterling is as close to essential as you can get. Remarkable form to finish last season, remarkable preseason form and playing in a remarkable team. What more can be said? Move mountains to get this man in your team.

A very respectable preseason with limited minutes. Adams seems to have won the race to start up front for Southampton this year, at least to start with. We’re expecting Southampton to be more solid this year and possibly build on their 16th place finish from last year. Their fixtures are a mixed bag to start with.

Jay Rodriguez Back In The Premier League

Fantastic goal return in the off-season but one to avoid for the moment. Barnes and Wood look set to start up front for Burnley and Rodriguez is seemingly the most likely option be used as a sub or during congested fixture periods.

Grealish is one to keep an eye on. After GW1, the fixtures look encouraging for the Aston Villa captain to kick on and show everybody why he is expected to thrive in the Premier League.

He has been integral to this Villa team and has shown an eye for goal and assists during pre-season. He will be in a few more teams by the time GW3 rolls around.

Jota has had a very respectable pre-season and some great performances in European Qualifiers. Rotation and fixtures are a slight worry but Wolves have shown an aptitude to score against any team. £6.5m means he’s a gamble but one that could be worth taking.

How do the Wolves forward pairing of Raul Jimenez and Diogo Jota stack up? ⬇️#FPL pic.twitter.com/cfopqCZra0

Robinson is an out of position midfielder playing up front. What’s not to like? Could prove to be a real bargain at £5.5m but you should always be wary of newly promoted teams as no one really knows how they are going to fair in the Premier League. Fixtures range from tricky to horrible in Sheffield United’s opening games.

Another player who has shown he will lead the line once the season starts. One to potentially bring in after GW1. At a price point of £6.0m he should be very easy to accommodate. He looks like a real handful and could be the budget striker you need in your team to free up funds elsewhere.

A Bournemouth attacker seems essential in the first two gameweeks and Callum Wilson is the talisman of the South Coast club. Showing fitness and form in preseason is making people sit up and take notice. At £8.0m he can be a perfect place holder to get a Chelsea striker in after GW2.

Lots of early debate about Joshua King vs Callum Wilson…

Despite being expensive with frustrating fixtures, you can get the highest scoring striker in the league for £11.0m. He is part of a potent, exciting strike force at Arsenal and theoretically you won’t go too far wrong with the former Dortmund player.

An excellent way to make a claim for Norwich’s starting forward role. However, Pukki should be nailed considering his exploits from last season. Pukki is the man to trust for Norwich this year but not until fixtures calm down.

The superstar from the Champions League semi-final is expected to start due to Son’s suspension. However, keep an eye on the various arrivals at Spurs which could dislodge Moura. When he plays, he tends to produce regular attacking returns and can be explosive. His fairly decent preseason means he should be on your watch list but may only be good for the short-term.

A wildcard pick that is worth the punt due to his £6.0m price tag. He played very well during pre-season and Frank Lampard trusted him when he managed him at Derby. Consequently, he would be a decent differential pick. With that said, keep an eye during Chelsea’s first few games to see how he is fitting in to that crowded midfield.