From now until the end of the season will be make or break for many FPL managers. Looking into FPL strategy for this period is vital. Double Gameweeks, wildcards and unused triple captain/bench boost chips are all contributing factors to what is the most important part of the FPL season. Some of you will still have your second wildcard and other chips whilst others will have no wildcard and already have used the triple captain/bench boost chips. As a result we are going to discuss separate strategies for those with and without their second FPL wildcard chip. For reference, the below table shows the fixture difficulty for each team from Gameweek 33 until the end of the season. A minimum rating of 6 has been given to any Double Gameweek in an effort to make the table as accurate as possible. 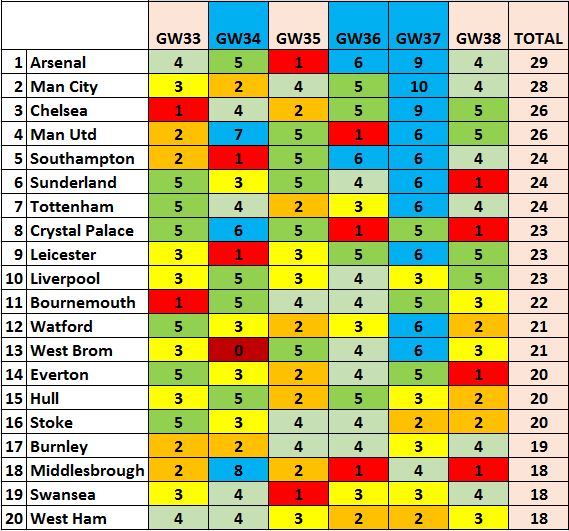 Having a wildcard makes preparing for the remaining Gameweeks a lot simpler. Below is what we consider the optimum strategy based on each Gameweek.

Transfer in Crystal Palace, Man Utd or Middlesbrough player(s) in preparation for their Double Gameweeks.

Use your wildcard. As per the fixture difficulty table above the focus should be primarily on Arsenal and Southampton players. A strong preference should also be put on Man City, Man Utd and Chelsea players. Beyond that make sure any players you bring in have a Double Gameweek 37.

If you have already used your wildcard you will need to implement a more long term strategy on the remaining fixtures.

The first thing that stands out is Arsenal, Man Utd and Southampton all have two Double Gameweeks. Therefore you should be transferring in these players from this point forward. Secondary to that Chelsea and Man City have one Double Gameweek and great fixtures in the other Gameweeks. It is important you have coverage from all of these teams.

Any players you transfer out should be from the following list of teams:

Some of you will note that Liverpool do have reasonable to decent fixtures for the remainder of the season. That is true but the Double Gameweeks of other teams, on average, will outweigh the points Liverpool players score here. The other teams rank low on the fixture difficulty table and don’t have any Double Gameweeks thus should be transferred out. Post Gameweek 34 you should also be transferring out Middlesbrough players.

If you are behind in your leagues you should play a slightly different FPL strategy. You should still focus on the teams that have Double Gameweeks as these teams are statistically overwhelming favorites to surpass those that don’t. You should focus on players from these teams with lower pick percentages and look to captain players who others won’t. We discuss some differential player options here: https://www.fantasyfootballpundit.com/differential-players-fpl/