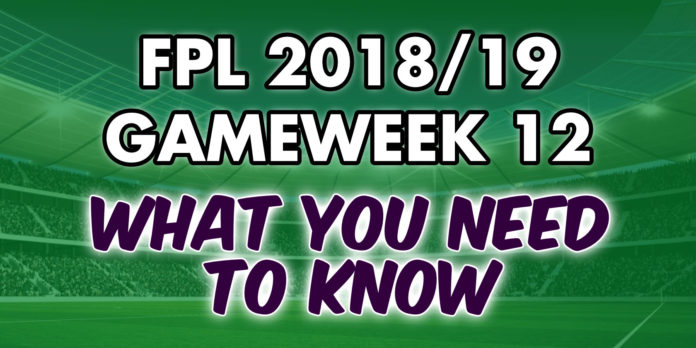 In our Fantasy Premier League Gameweek 12 preview we start by looking at GW12 fixture difficulty. That is followed by our popular cheat sheet which tells you the percentage chance of each team winning, drawing and keeping a clean sheet. It also tells you the most likely goalscorer from each fixture. FPL Gameweek 12 captain choices are then also discussed. Elsewhere, we have updated our fixture difficulty matrix all the way up to Gameweek 20. It can be found here: https://www.fantasyfootballpundit.com/fixture-analysis/

The average points for Gameweek 11 was 52. The curse of the most transferred in player continued as Ross Barkley only returned two points at home to Crystal Palace. Elsewhere, the Arsenal vs Liverpool match cancelled out most of the FPL assets that featured. Liverpool’s front three got two points each, Aubameyang also got two points and Lacazette who scored Arsenal’s equaliser got 6. There were plenty of points shared around for Man City, however. Hosting Southampton, Aguero, Sane and Sterling scored an incredible 48 points between them. The latter scored a season high 21 points!

Look no further than Liverpool for your Fantasy Premier League Gameweek 12 captain choice. Fulham have conceded the most goals away from home this season and Liverpool may even be disappointed with averaging 2.4 goals at home. Mohamed Salah is obviously the number one candidate for captain but for those who don’t own him, Sadio Mane isn’t a too distant second. Elsewhere, Eden Hazard, Harry Kane and Sergio Aguero all have similar odds of scoring. Hazard had his minutes limited in the Europa League and Aguero was rested all together. Kane played the 90 minutes in his match winning performance against PSV but given Tottenham’s reliance on him for goals there’s little doubt he will play the 90 against Crystal Palace. Nevertheless, Mohamed Salah is our captain pick for Gameweek 12.

We have also highlighted Hazard, Kane and Aguero – who all have similar odds of scoring.

Gameweek 12 – Transfers In and Out

Of course with such a favorable fixture, Liverpool players are a must for Fantasy Premier League Gameweek 12, and none more so than Salah and Mane. Marko Arnautovic looks to be back to his best. He picked up a goal and assist against Burnley in Gameweek 11. West Ham do face Man City in Gameweek 13 but other than that their fixtures are attractive making Arnautovic an essential acquisition at £7.1m. Coming off a 12 point haul and with even better fixtures than West Ham, Ben Chilwell is another tantalising proposition at £5.0m. On the flip side, due to fixtures and a down turn in form, Wilfried Zaha, Theo Walcott and Aleksandar Mitrovic are our top picks to transfer out.

Transfers in and out for Gameweek 12…

With Liverpool facing a defensively poor Fulham, it may be costly to not have Mohamed Salah or Sadio Mane in your team.