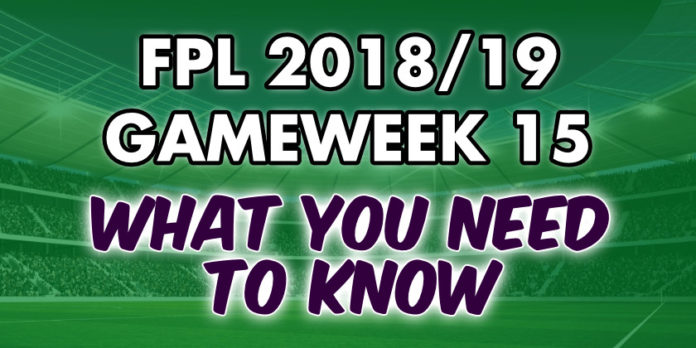 FPL managers are treated to be a midweek round of action in Fantasy Premier League. Gameweek 15 starts Tuesday, November 4 and the transfer deadline is 18:45 GMT. We start our Gameweek 15 tips by reviewing the Gameweek 14 action. We then move on to Gameweek 15 fixtures. Each team’s percentage chance of winning, drawing, keeping a clean sheet as well as the matches’ most likely goal scorer are listed. Captains for each gameweek are usually a big talking point and we share the likelihood of the top contenders scoring. Finally, we list the top players to transfer in and out ahead of Gameweek 15. Our fixture analysis currently goes up to Gameweek 23. It can be found here: https://www.fantasyfootballpundit.com/fixture-analysis/

Gameweek 14 produced another average week in terms of points scored. The highest points total was also interestingly less than average but this gives little inclination on the state of the gameweek. The only thing it can show is that the highest scoring players weren’t overly well picked. The curse of the most transferred in player was lifted this week! Raheem Sterling scored 9 points. He scored 16 points in the week previous. There was less joy for FPL managers who were among those who captained the most popular captain, Sergio Aguero. The Argentinian didn’t even make the Man City squad! Elsewhere, Pierre Aubameyang’s points per minute have continually been impressive. His 16 points against Tottenham not only gave him the accolade of being the gameweek’s highest scorer, but also puts him third in the overall FPL point charts.

FPL Gameweek 15 doesn’t offer a straight forward captain choice. There are several options for the role this week. Perhaps at the forefront of this, and for the first time in a while, is Harry Kane. Tottenham play a relegation battling Southampton team who are without a manager following the sacking of Mark Hughes. Another option, who is always an option, is Mohamed Salah. He, along with his strike partners, aren’t hitting the form of last season. Nevertheless, Liverpool are playing a Burnley team who have just two points since the beginning of October. Elsewhere, with Man City in their never-ending good form, Sergio Aguero is always in the captain discussions. However, he does have a serious injury concern heading into Gameweek 15. Even if he does play his minutes could be limited. As a result Raheem Sterling seems to be Man City’s second best option.

For the first time since Gameweek 8, Harry Kane is arguably the best captain choice for Gameweek 15.

Gameweek 15 – Transfers In and Out

What do Harry Kane and Pierre Aubameyang have in common? A lot of points to their name and excellent upcoming fixtures. Both are top transfers in for Gameweek 15. Elsewhere, West Ham also have great fixtures. Their tough schedule in the beginning of the season is balancing out over the Christmas period. They don’t face a top 6 team until Gameweek 22. Consequently, Marko Arnautovic and Felipe Anderson could provide excellent value right now. The aforementioned Christmas period means a lot of fixtures in a short space of time. Therefore, players like Sergio Aguero, Mohamed Salah and Sadio Mane, who all have able replacements, might have their minutes, or even appearances, limited.