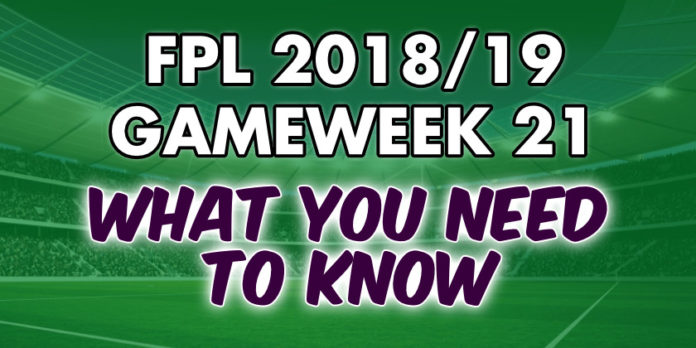 Gameweek 21 is the last gameweek before Fantasy Premier League takes a mini-hiatus. There is a small international break but FPL does resume for Gameweek 22 on January 12. Before that though, we take a look at the Gameweek 21 fixtures. Specifically, each team’s percentage chance of winning, keeping a clean sheet and the fixture’s most likely goal scorer. For fixtures beyond Gameweek 21 check out our Fixture Difficulty Matrix.

After a bumper Gameweek 19, Gameweek 20 produced a more modest average of 50 points. Gameweek 20 did end the curse of the most transferred in player. Observant FPL managers will have noticed previous most transferred in players performed poorly in the subsequent gameweek. Paul Pogba more than finished this curse as he returned 18 points. Since Jose Mourinho’s depature, Pogba has scored an incredible 46 points in three gameweeks. Elsewhere, Harry Kane was the most trusted captain. He did score but failed to stop Tottenham succumbing to a 3-1 defeat at the hands of Wolves.

The bookmakers make Pierre Aubameyang the most likely to score in Gameweek 21. However, his captaincy credentials are weakened by the fact he has started Arsenal’s last 11 Premier League matches. Moreover, he has played 90 minutes in each of them with the exception of Liverpool in GW20.

The most sensible alternative is Harry Kane. Despite being away from home, Tottenham will be expected to dispatch of Cardiff comfortably. They are 1/2 on to win the game. Despite an up turn in form over recent weeks, Cardiff did lose 5-1 to Man Utd in Ole Gunnar Solskjaer’s first game in charge. This is evidence that Cardiff might struggle with the quality of Tottenham’s attacking players.

Usual captain choices, Mohamed Salah and Sergio Aguero, aren’t as appealing for GW21 as Man City host Liverpool. The fixture will likely deter most FPL managers from captaining Salah, even with his incredible form. The Egyptian has scored 12 points in each of the last three gameweeks. Aguero is more appealing due to Man City realistically needing to win the game. The champions have averaged an astounding 3.5 goals a game at home this season.

Another obvious captain choice is Eden Hazard. Southampton have had a mini-resurgence under new management but have lost their last two. Consequently, a trip to Stamford Bridge wouldn’t have been one of their most desired fixtures. Hazard’s point scoring has been sporadic. Within his sporadic returns he has produced double-digit returns on six separate occasions this season.

Finally, Paul Pogba comes into the captaincy discussion. Salah has been in ridiculous point scoring form as of late and Pogba has bettered even this. 46 points over the last three gameweeks means he will be considered for the captaincy, even in an away fixture to Newcastle.

The Arsenal striker is due a rest though… Eden Hazard also very appealing with a home fixture against Southampton.

A tough captaincy decision to kick off 2019!#FPL pic.twitter.com/yp2HWGe5qj