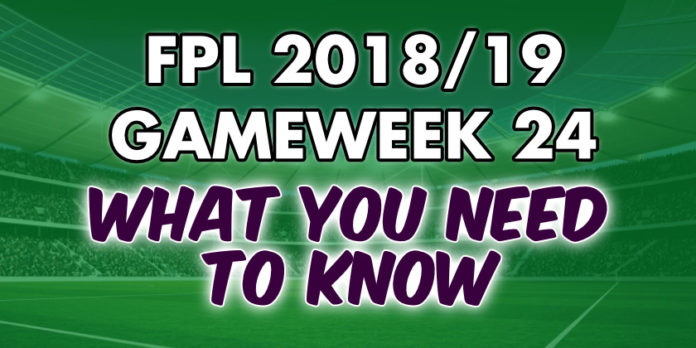 Gameweek 24 marks the last gameweek before the big Double Gameweek in 25. This midweek fixture set is followed by another full set of Premier League fixtures this weekend. For future fixtures check out our Fixture Difficulty Matrix.

Gameweek 23 returned an average of 54 points. The most transferred in player and most captained were the same Gameweek 22. This was Marcus Rashford and Mohamed Salah, respectively.

Fabian Schar was the surprising star player for Gameweek 22. Not always a starter, Schar scored 21 points after two goals and a clean sheet.

Another gameweek and another gameweek where Mohamed Salah is statistically the best captain. The Egyptian has been in incredible form, even by his own high standards. He has a mind blowing 6 double digit hauls in the last 8 gameweeks. Over that period he has scored 87 points! A home fixture against Leicester won’t deter FPL managers from giving him the armband.

For those who want to go in a more differential direction, or who don’t own Salah, Aubameyang is the second best choice. He seems a certain starter, having started every game since Gameweek 10. Moreover, he has a 56% chance of scoring. A home fixture against a Cardiff side with defensive injuries only adds to his appeal. His immediate form isn’t the best, having scored only once in the last four. Nevertheless, he is more than a suitable captain choice for Gameweek 24.

Of course Sergio Aguero is always an option. Man City’s top scorer is facing a Newcastle side who he is an excellent record against. However, there are annoying negatives which need to be considered. Aguero is far from certain to start, with his centre forward counterpart Gabriel Jesus in great form. Consequently, it might be too great of a risk to put the armband on him.

Elsewhere, Man Utd host Burnley. With 8 wins in a row their players now become captain options. Specifically, Paul Pogba and Marcus Rashford have been returning points in abundance. Both are expected to start. Since Ole Gunnar Solksjaer took over, Pogba and Rashford have accumulated a respective 62 and 45 points.

No surprise to see Mohamed Salah as the most likely goal scorer. Pierre Aubameyang just behind him with a home fixture against Cardiff…#FPL pic.twitter.com/d8OGvHG5dt