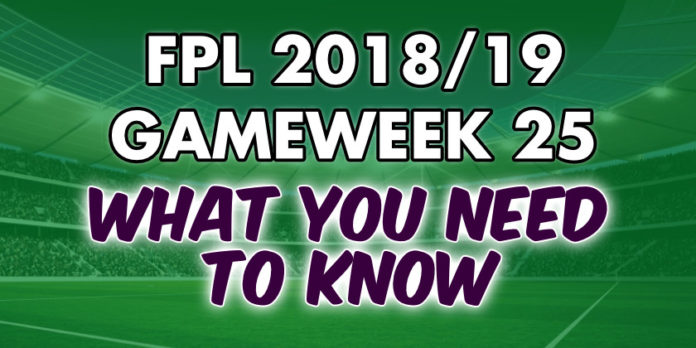 The big Double Gameweek 25 is upon us. For the first this season a team will feature in the same gameweek twice. Everton face Wolves and Man City host Arsenal. Following these fixtures the two meet at Goodison Park. Of course Everton and Man City players will be highly coveted this week. However, it should be taken into consideration that consequently, both have a blank fixture in Gameweek 27.

Gameweek 24 produced a very low average of just 42 points per FPL manager. For the third week in a row, Marcus Rashford was the most transferred in player and Mohamed Salah was the most captained. Joshua King was the best performing player of the gameweek with 16 points. He scored twice and assisted once in Bournemouth’s 4-0 demolition of Chelsea.

Here is our Fantasy Premier League Gameweek 25 cheat sheet. The Double Gameweek fixture, Everton vs Man City, is included at the bottom.

Given Everton and Man City are the teams to play twice in this Double Gameweek, your captain almost certainly should come from one of them. Everton have been somewhat inconsistent this season and Man City’s quality is clear. Consequently, we’d recommend captaining a Man City player.

Naturally Sergio Aguero is therefore the leading contender. If we could be sure Aguero would start both games then the captaincy debate almost ends there. However, we all know Guardiola likes to rotate. Therefore, it is perhaps more likely than not Jesus will start one of the games.

Alternative options include Leroy Sane and Raheem Sterling. Both have the potential to be rotated but interestingly both have started the vast majority of Premier League games this season. In terms of combined goals and assists there is almost nothing between them. Evidence suggests Sterling is more likely to play 90 minutes when starting so that may be justification enough to choose him out of the two.

A differential option for the Gameweek 25 captaincy is a Man City defender. This is particularly appealing if you’re behind in your mini-leagues. Man City have around a 40% chance of a clean sheet in each fixture. The safe option is in terms of starting would Aymeric Laporte who has started all but one of Man City’s league games this season. Kyle Walker offers a greater attacking threat and appears to be back in favour, having started the last three.

Everton and Man City have a Double Gameweek so you should be captaining one of their players.

Obviously the appeal for Kyle Walker is clean sheets. Man City have a 66% chance of keeping at least one clean sheet.

*Everton vs Man City odds estimated as not yet available. #FPL pic.twitter.com/ObvH9YHKDx