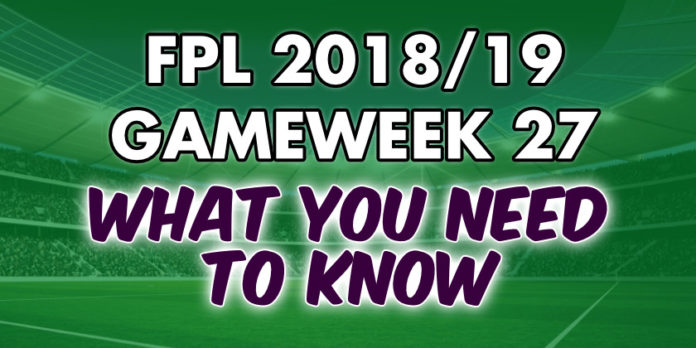 Fantasy Premier League Gameweek 27 brings the first blank fixtures of the season. Brighton, Chelsea, Everton and Man City all miss out on Gameweek 27. These missing teams, alongside a Man Utd vs Liverpool clash, mean points could be hard to come by this week.

Heung Min Son was the most transferred in player for the second gameweek in a row. Moreover, Mohamed Salah was most captained again. However, with a pick percentage of over 50% this is hardly surprising.

Raheem Sterling scored the most points in Gameweek 27 after Man City’s demolition of Chelsea. Despite three goals and three bonus points on top of that, Sterling’s teammate, Sergio Aguero, had to settle with second best performing player of the week. Of course, neither of these will feature in Gameweek 27.

Man City being absent from Gameweek 27, changes the captaincy dynamic somewhat. In almost all of their fixtures Sergio Aguero and Raheem Sterling are captain contenders.

In addition to this Man Utd host Liverpool which lessens the appeal of primarily Mohamed Salah and to a lesser extent Marcus Rashford and Paul Pogba.

Consequently, Arsenal forwards Pierre Aubameyang and Alexandre Lacazette become some of the best options. Aubameyang played the 90 minutes in the Europa League, while Lacazette was suspended. The former is a more likely goalscorer but it is the Frenchman who perhaps has an increased chance of starting. Nevertheless, both are likely to start together.

The other contender is the red hot Heung Min Son. The South Korean has done an excellent job filling in for Harry Kane. He has scored in each of the last three gameweeks and is on 11 Premier League goals for the season.

Blanks for Man City and Chelsea along with a Man Utd vs Liverpool fixture, reduce the options somewhat…