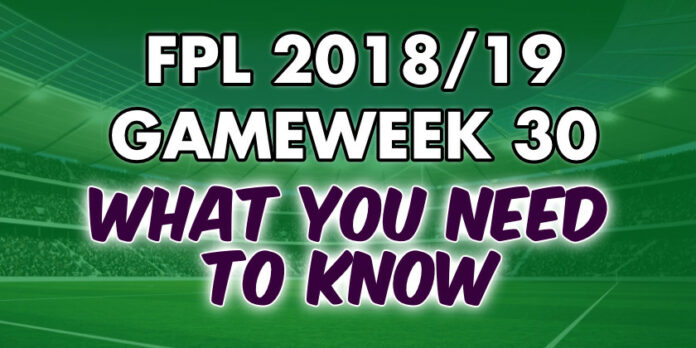 Just 9 Gameweeks remain of the 2018/19 Fantasy Premier League season. With a blank in Gameweek 31 and 33 along with multiple Double Gameweeks there is still a lot of work to be done.

Much like Mohamed Salah this season, Sergio Aguero was the most transferred in and captained player for Gameweek 29. With that said, he unsurprisingly had a quiet gameweek, scoring just two points away to Bournemouth.

Declan Rice was the best performing player of the week, after he returned 15 points for the second time this season. His goal and clean sheet contributed to West Ham beating Newcastle 2-0.

The Fantasy Premier League Gameweek 30 captaincy essentially boils down to Mohamed Salah or Sergio Aguero. Both face good home fixtures in which they are massive favorites.

The Egyptian has a 58% chance of scoring, while Aguero has 62%. The decision isn’t as simple as comparing these numbers, though. Even with Salah having a crunch Champions League tie midweek, he appears the more certain to start. However, the form difference between the two is staggering, Salah has one goal in his last 6, whereas Aguero has 8!

Elsewhere, Kane is back on form and is a certain starter. Southampton away may not be the best fixture but it certainly isn’t the worst. The England captain is 49% to score in that game.

Other Liverpool and Man City players to consider are Sadio Mane and Raheem Sterling. Both are in excellent form, with the former having scored in 5 of the last 7.